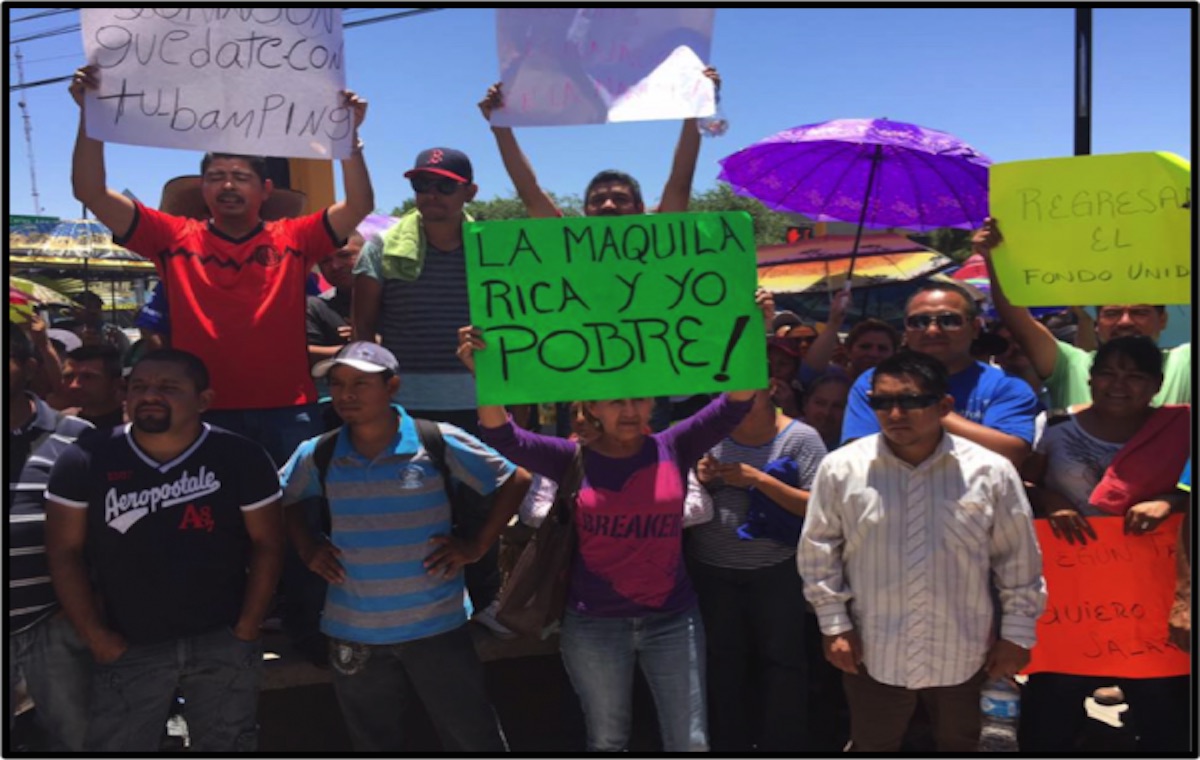 There are over 300 maquiladoras in Ciudad Juárez that employ over 250,000 workers at substandard wages. The Johnson Controls wage dispute is the latest struggle in a series of ongoing labor issues.

On July 5, 2016, 790 workers from Johnson Controls plants 1, 3, 4 and 6 walked off the job seeking better pay. They also demanded that the company end the exploitation of workers, especially after the company introduced a work method known as “bumping.” This practice was first introduced in Spain and consists of one worker doing three to five tasks to produce one piece on the assembly line. Bumping makes it possible for workers to produce more pieces at the same wage.

According to their webpage: “Johnson Controls, Inc. is an American-based multinational conglomerate producing automotive parts such as batteries and electronics and HVAC equipment for buildings.” The company states that it employs 170,000 people in more than 1,300 locations across six continents. Johnson Controls includes an Ethics Policy that states that they do not tolerate and actively oppose corruption in their businesses, but they seem to have turned a blind eye to their operations in Mexico.

Workers have made the following demands: (1) that Johnson Controls respect basic workers’ rights; (2) that workers get a wage increase; (3) that the company eliminate the practice of “bumping;” (4) that the company contract at least three workers per line, to cover absences of the rest of the workers at lines, to allow workers to go to the restroom, to offer workers required special permits to be able to leave plant for health reasons, etc.; (5) that workers be able to take their vacations when they have their continuously on a yearly basis, and not only when the company allows it; (6) that the company end the abuse and hostility towards workers, especially the sexual abuse that occurs daily. They are also seeking damages for loss of wages that have been withheld.

Susana Prieto Terrazas, the attorney representing the workers, said the workers are not the problem. It’s systemic, she said. Johnson Controls plants in Puebla, Reynosa, and Monclova, Coahuila, have similar issues and all are on strike. Workers are also seeking wage increases in Tijuana and Italy. This isn’t the first time Johnson Controls has had labor disputes in Mexico. In 2012, just a year after an independent union gained recognition in a Puebla plant, the company closed it.

The significance of the Johnson Controls Wage Strike in Ciudad Juárez is the number of people involved: 790. That’s 10 times the number of Lexmark workers who staged a three-month occupation outside that maquiladora last winter. In addition to Lexmark workers, 432 workers from other companies experienced labor issues issues in 2015: 37 workers from Eaton Industries (June 2015), 20 from Eaton Bussman, 125 from Foxconn (August 2015) and 250 from Commscope (September 2015). Around the world, 27 million workers (mostly women) work in factories like Mexico’s maquiladoras under similarly exploitative conditions, and the reawakening of their resistance in Ciudad Juárez is important.

The maquiladoras are constantly adopting new scams to enhance lean production. Lexmark workers were urged to raise productivity using the Shingo Price model. Workers at Johnson Controls faced an unscalable ladder of six wage levels before they walked out. Level seven —the highest level, paid 210 pesos a day ($11.36)— has not been achieved by any worker. Many workers earn 100 pesos a day ($5.41). The average age for workers is between 35-40. Most of the workers have reached Level 4 and earn 153 pesos daily ($8).

Workers also suffer from foot spurs after standing on the job for shifts of 9½ hours and often overtime shifts of 6 hours. A worker injured on the job has to wait until the company physician arrives to be taken to a private hospital, where they get 15 days of care. At the end of the 15 days, they are released but many are only compensated for 60 percent of their benefits.

At the publication of this article, Johnson Controls workers are laboring from 6:30 a.m. to 9 p.m. Monday through Sunday due to the firing of 360 workers and the retention of salaries from more than 390 workers. The company is working with 770 to 790 less employees, and that has forced people to work overtime. They have also brought 140 workers from Monclova to work Monday through Sunday as well.

Johnson Controls workers sew seats and airbags for Lexus and an array of luxury vehicles, including Japanese cars. Sewing is the best-paid job for maquiladora workers in Ciudad Juárez, but it is also one of the most injury-laden. Sewers must stand all day. They cannot turn around to talk with co-workers. If they do, they are asked to resign by the human resources managers. Most workers do not protest or seek legal representation; most comply with their managers, fearing repercussions for future employment.

Company Corruption at All Levels

Workers in Ciudad Juárez report widespread corruption among supervisors. One production supervisor offers women overtime in return for sexual favors. A group of very productive workers pays 200 to 1,000 pesos “commission” to their supervisor for the privilege of working overtime. Johnson Controls offers a $6,000-peso sign on bonus to new workers that have experience, but payments are spread out over a 13-week period, and they only get them if they have perfect attendance. Due to the excessive work demands, most people often resign after their first week. In addition, maquiladoras also ask for a “carta de no antecedentes penales” or a letter that attests to no prior arrests. According to Prieto Terrazas, Mexican federal employment law does not require presenting such a document to obtain employment, but maquiladoras require it. The letters are sold to workers because the Mexican government profits from their sales. The Mexican government sells the letter for 82 pesos. Workers seeking employment in Ciudad Juárez maquiladoras need to pay the 82 pesos for the letter, as well as 28 pesos round-trip ride to go to the State’s General Finance Agency. Many workers simply do not apply for work because they lack the 110 pesos needed to obtain the letter that they technically do not need to look for employment in maquiladoras.

Johnson Controls’ corruption is not limited to Mexico. In a July 11, 2016 article in the Wall Street Journal, Stephen Dockery reported that “Manufacturing company Johnson Controls agreed Monday to pay $14 million to settle Foreign Corrupt Practices Act charges with the Securities and Exchange Commission over conduct in China, while the Justice Department closed its investigation into the matter partly because of extensive cooperation by the company.”

How Johnson Controls Seeks to Break the Current Strike

Johnson Controls is bringing 500 workers from Monclova and Saltillo in the northern Mexican state of Coahuila to replace the workers who have walked off the job. Recruitment for the positions was limited to experienced workers who were offered a 5,000-peso bonus for three weeks of work that will be paid after their three weeks in Ciudad Juárez. Workers who were offered the opportunity and who refused to work were told they would be fired. The first 500 workers arrived on Friday, July 15. After three weeks, another 500 will be bused in. In a situation that looks a lot like human trafficking, they work from Monday to Sunday and are housed in a local hotel, unable to leave. The striking Johnson Controls workers fear police repression and provocateurs. Recently the police tried to provoke violence during a protest where 40 police vehicles, provocateurs and two sharp shooters arrived to immobilize workers, but the workers were saved when a reporter showed up to cover the event.