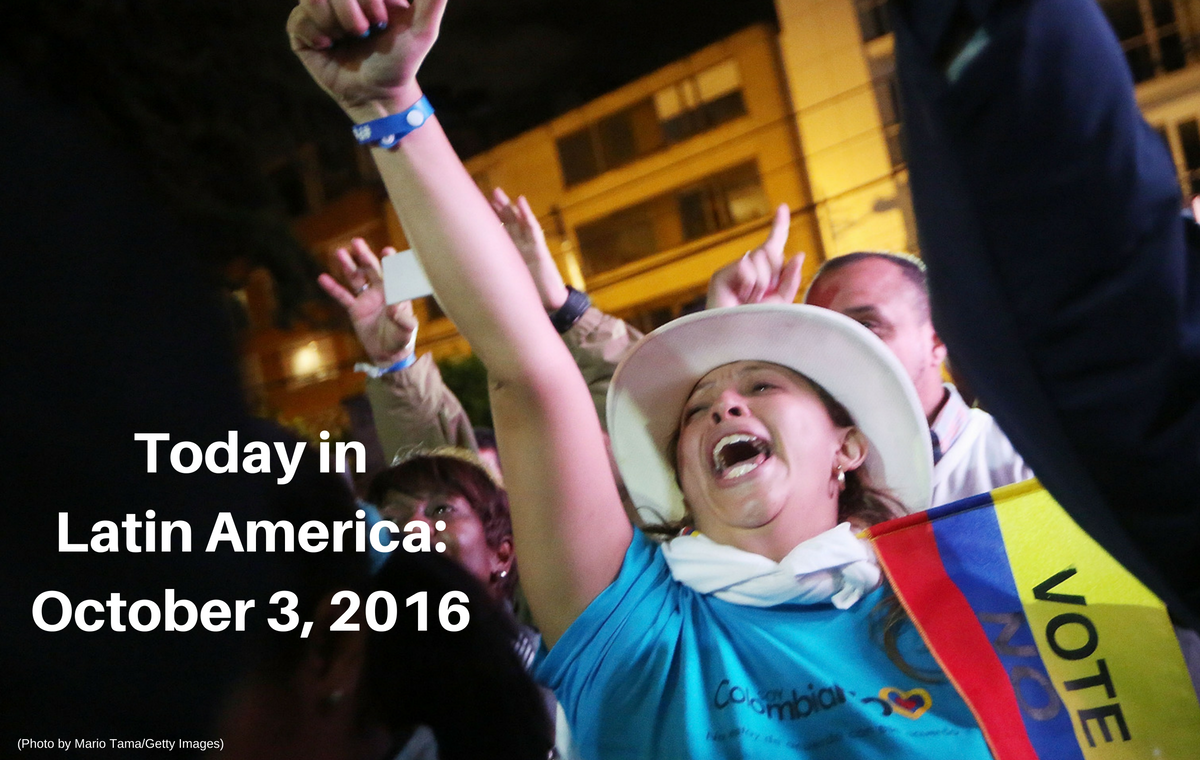 'No' supporters celebrate at a rally following their victory in Colombia's FARC peace accord referendum. (Photo by Mario Tama/Getty Images)

The results are in: Colombian voters decided by a margin of 50.25 to 49.75 percent Sunday to reject the peace accord, confounding polling predictions of a generous approval victory. Negotiations between the leftist guerrilla group FARC and the Colombian government began in 2012 to reach the deal, and with the “No” outcome, it’s unclear what course the country will take to end the longest conflict in the Americas.

In response to the result, President Juan Manuel Santos tweeted Sunday night, “I will not give up, I will keep looking for peace until the last day of my term because this is the path that will leave a better country for our children.”

The top leader of the FARC known as Timochenko said in a televised address from Havana, “The FARC profoundly laments that the destructive forces that plant hate and pain have influenced Colombian opinion.”

Meanwhile, the most prominent proponent of the “No” campaign, former President Álvaro Uribe said he’d pursue peace “without impunity.”

Regions of the country most hit by the conflict overwhelmingly voted to approve the deal. The result will also call into question the yearly $450 million aid package that the Obama Administration committed to Colombia through the peace agreement, The Washington Post pointed out.

Turnout for the referendum was consistent with Colombia’s historically high abstention rate. Only 37 percent of the electorate turned out to vote in the plebiscite — a yes or no answer to the question, “Do you support the final agreement to end the conflict and construct a stable and enduring peace?”

The Latin America News Dispatch is back from hibernation!

The Inter-American Commission on Human Rights announced Friday that it has overcome its 2016 financial crisis and will be able to continue business as usual thanks to donations from multiple countries and international organizations. The IACHR is an independent organ within the Organization of American States that investigates human rights and hit headlines this year after issuing a damning report on the current human rights crisis in Mexico.

Arturo Figueroa Bonastre was a nursing student in Veracruz when he went missing in November 2012, according to a profile in the Los Angeles Times that highlights the crisis of rising numbers of desaparecidos in Mexico. Officials say that some 28,000 people are currently missing in the country, though activists say the number is likely higher.

The head of Mexico’s Central Bank Agustín Carstens called Trump a “hurricane” sized threat to Mexico on Friday. The bank raised interest rates the day before, citing uncertainty over the U.S. election.

Mexican officials suspect that the sons of the incarcerated leader of the Sinaloa drug cartel, Joaquín “El Chapo” Guzmán, are behind a Friday morning ambush that killed five soldiers and wounded 10 others in the northern Mexico. It was the deadliest attack on military personnel in the country since 2015, and comes as rival cartels like Jalisco New Generation are also testing Mexico’s military forces.

The federally-appointed oversight board officially took over Puerto Rico’s finances on Friday when it met in New York to elect a chairman to lead controversial economic restructuring efforts in the face of the commonwealth’s debt crisis. The Associated Press reported that demonstrators interrupted the livestreamed meeting with cries of ‘This is slavery!’ and ‘Stop pillaging Puerto Rico!’

New restrictions on immigration policy have separated scores of Haitian families along the U.S.- Mexico border, the New York Times reports. This comes as a result of the Obama administration’s efforts to halt the sudden flow of Haitian migrants coming from Brazil.

The number of Cubans captured at sea by the U.S. Coast Guard jumped 65 percent last year. Cubans have fled the island in greater numbers since diplomatic relations with the United States began normalizing two years ago.

In response to the looming threat of Hurricane Matthew, the United States evacuated some 700 “non-essential personnel” and family members of troops from Guantánamo Bay on Sunday night, according to the Miami Herald. They have been airlifted to Pensacola, Florida, while military personnel, along with all 61 detainees, remain in the U.S. Navy base.

A Salvadoran judge reopened the case of the 1981 El Mozote massacre, during which between 900 and 1,200 people were killed, allegedly by an elite army unit in the midst of the country’s civil war. Judge Jorge Alberto Guzman has demanded military records be handed over and is the first judge to reopen a case of this nature since an amnesty law absolving military and guerrilla fighters was declared unconstitutional in July.

Yet violence persists in El Salvador. Salvadorans are currently caught in the crossfire of a war between rival gangs and the country’s security forces, which has recently pushed 70 people into the first camp for internally displaced individuals since the civil war, The Guardian reports.

Venezuela will stop counting on loans from China. Since 2007, the country has loaned Venezuela $60 billion, making it Venezuela’s most important creditor.

And in the midst of this shift, The New York Times chronicled the hardships of everyday life in a state-run psychiatric hospital in the Colombian city of Barquisimeto, regarded as a “long forgotten place, filled with forgotten people,” where there are almost no medical supplies available to carry out necessary treatments.

During a two-part interview that started airing Sunday on CNN en Español, Argentine President Mauricio Macri said he believes that late prosecutor Alberto Nisman didn’t commit suicide, but was murdered. Macri said that he came to that conclusion by “using common sense.”

Children’s rights organization Terre des Hommes wants the International Olympic Committee to compensate kids who suffered police violence at the Rio games this year. The group says children faced “indiscriminate use of force” during attempts to sweep the homeless off the streets ahead of the games. “Our research reveals human rights violations of youth and children in Rio, ranging from police killings, harsh police repression of protests and an alarming increase of police violence against adolescents in street situation,” said Andrea Florence, who authored the report.

Brazilian police arrested community journalist Rene Silver and photographer Renato Moura in the Alemão favela complex of Rio de Janeiro Saturday night while they were covering the eviction of families in the city. Silva was charged with contempt of authority and trespassing.