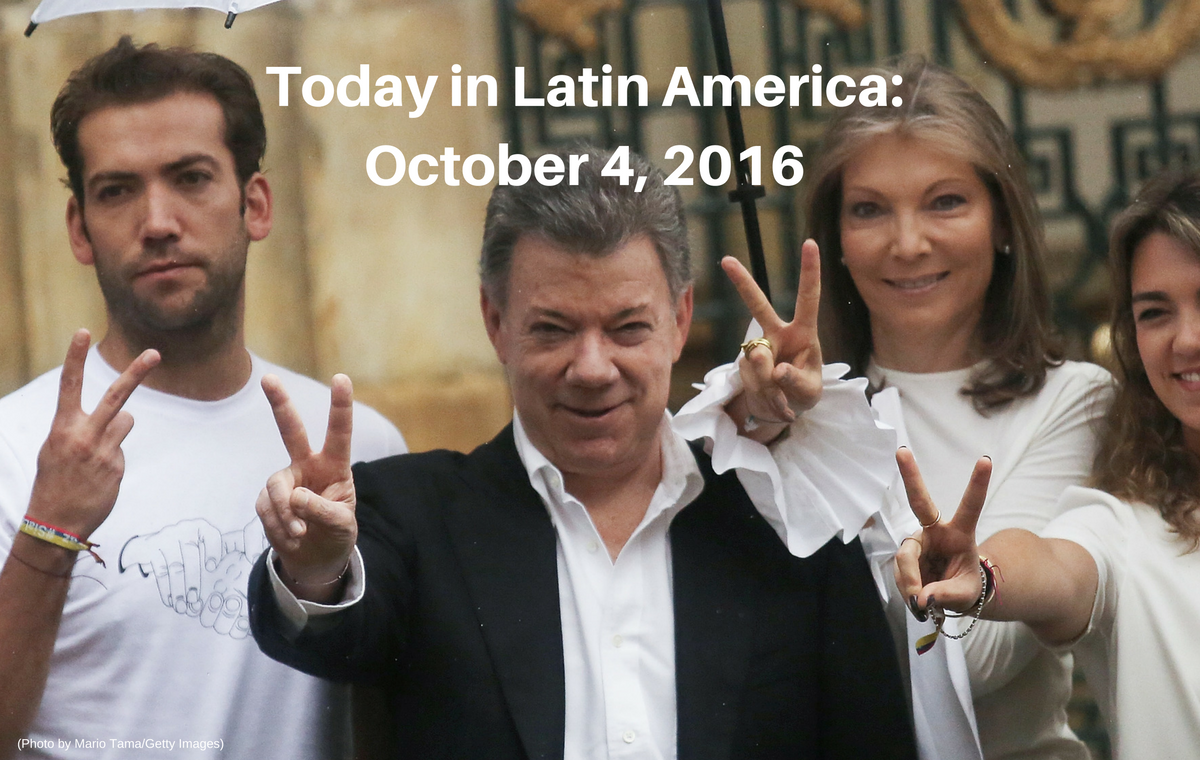 Colombia's President Juan Manuel Santos (C) makes the victory/peace sign with son Martin Santos (L), wife Maria Clemencia Rodriguez (2nd R) and daughter Maria Antonia Santos (R) after voting in the referendum on a peace accord to end the 52-year-old guerrilla war between the FARC and the state on October 2, 2016 in Bogota, Colombia. (Photo by Mario Tama/Getty Images)

URIBE’S MOMENT: Former Colombian President Álvaro Uribe wrested control of the country’s peace process after the surprising victory of the “No” campaign on Sunday quashed the deal negotiated with the FARC. President Juan Manuel Santos has called on all sectors of Colombia to return to the negotiating table, but in the words of Juanita León at La Silla Vacía, Uribe “presented himself as the leader of the country. And he offered an agenda that went far beyond the negotiations with the FARC…”

BOGOTÁ, Colombia—Álvaro Uribe found the bullet-riddled body of his father at the family’s farm in 1983. Rebels from the Revolutionary Forces of Colombia, or the FARC, had killed him in a kidnapping attempt.

When he became Colombia’s president 19 years later, Mr. Uribe targeted the FARC with a military offensive. Then this weekend, more than anyone else, he helped scuttle the nationwide referendum that would have sealed a peace treaty between his successor, Juan Manuel Santos, and the Marxist rebel group.

The stunning outcome thrusts Mr. Uribe, now 64 years old and a senator, into a central role shaping what will happen next.

The ceasefire remains in place for the moment.

If there were already concerns over the agreement, which has now been rejected, many FARC elements may decide that continuing the armed struggle is better than making more concessions.

Already the FARC‘s First Front leadership in Guaviare has pronounced itself dissident and against the peace agreement. It eventually split into pieces with some elements turning themselves over to the peace process and others reorganizing, preparing themselves for the next phase of battle, or criminal activities, or both.

Other rebel units may now be tempted to adopt the same position if further concessions are demanded, particularly if they have to go to prison.

If you’re still wondering why Colombia voted “no” to the peace deal while the world expected a “yes” vote, read Nick Miroff’s explainer at The Washington Post.

ANOTHER BIG STORY: The case file in the Berta Cáceres investigation has been stolen, further undermining the already disastrous handling of the country’s most prominent human rights crisis.

NUMBER OF DAY: 47 percent of Mexicans say their economic situation has declined over the last year, according to a survey the country’s House of Deputies.

DOCU-DUMP: ACLU explains how the Department of Homeland Security can stop relying on private prisons. Read the report for the recommendations. But first, the scope of the issue, from the Executive Summary:

For the past three decades, the immigration detention population has increased dramatically, reaching historic highs under the Obama administration. To manage the growing detainee population, ICE has increasingly turned to for-profit prison corporations and to county jails. By summer 2016, both the ICE detainee daily population and the proportion of detainees in privately run facilities reached record high levels, with the average daily detainee population exceeding 37,000. Of this population, approximately 73 percent are detained in privately run facilities, about 15 percent in county jails, and only 12 percent are in federally owned facilities. Thus, on any given day some 24,500 detainees are locked up in private prisons with most of the remainder detained in county jails.

The L.A. Times and The Daily Beast both profiled ahead of the VP debate, with both mentioning his relationship with a left-wing liberation theologian who was disappeared there. Expect him to rattle off some Spanish in the VP debate tonight.

Florida has long been a stronghold of the Republican Latino vote, but a growing Puerto Rican demographic means a shift to the left, reports The New York Times.

Mexico is the most dangerous country in the world to work for the ministry, according to The Daily Beast. Fifteen priests have been killed so far this year.

Honduran police fired tear gas on protesters who were blocking highway toll booths in protest of rising tolls and electricity prices as well as efforts by the ruling party to re-elect incumbent President Juan Hernández.

A category 4 hurricane began lashing Haiti early Monday morning, raising concerns about the island’s preparedness and the possibility of a spike in cholera cases. The storm might further delay presidential elections scheduled for this weekend.

The same hurricane may also hit Cuba and other parts of the Caribbean today.

AP highlights the troubles facing the Venezuelan health care system in a lengthy feature revolving around a child’s knee scrape that becomes a serious infection when the parents can’t get antibiotics.

In less urgent news, CNN covers Venezuela’s “pet crisis.” Dog food costs about a third of the monthly minimum wage, leading some to abandon them, according outlet.

Brazil’s Workers Party lost about 2/3 of the municipalities they controlled in Sunday’s local elections, Reuters reports.

Supporters of former Guantánamo Bay prisoner Abu Wa’el Dhiab say that he intensified his hunger strike in Uruguay on Monday by refusing to take liquids. After 12 years in the Gitmo military prison and no charges against him, Dhiab was released in 2014 and is now fighting to leave Uruguay to be reunited with his family in Turkey or another country.

The Macri administration is showing Argentine cinema some love, with a $61 million plan to promote the industry, reports Variety.