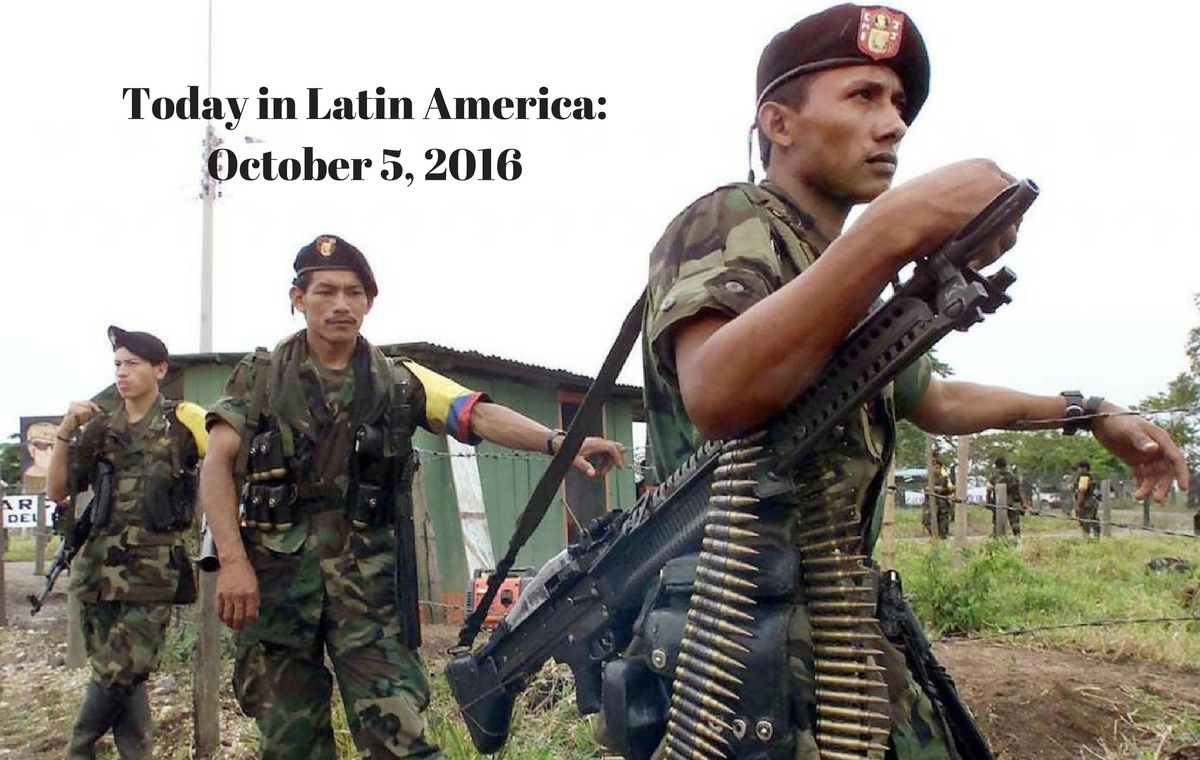 The ceasefire between the Colombian armed forces and the FARC rebels will only last until Oct. 31, according to El Espectador. Colombian President Juan Manuel Santos stopped short of saying the the government itself would break the tenuous peace, but he appeared to press the parties he’s trying to bring to the table to come to an agreement quickly.

“Time is very important,” Santos said. “We can’t prolong this process and this dialog for too long because we’re in a grey zone, a kind of limbo that’s very risky and that can undermine the whole process.”

TWEET OF THE DAY: FARC leader Timochenko wonders if Santos’ words mean the country will return to war.

SHOWDOWN: Sen. Uribe, leader of the “No” campaign, to meet with Santos today at 11:30am.

NUMBER OF THE DAY: 39 percent of those surveyed by pollster Ibope say recently installed Brazilian President Michel Temer’s government is “bad” or “terrible,” at a time when he hopes to press ahead with unpopular reforms to reverse the effects of a crippling recession, Reuters reports.

ALSO IMPORTANT: Category 4-strength Hurricane Matthew made landfall Tuesday night off Cuba’s east coast after pummeling Haiti and the Dominican Republic earlier in the day. Several outlets were reporting estimates of seven people dead as of yesterday evening in what The Guardian is describing as “the fiercest Caribbean storm in almost a decade.”

The hurricane destroyed homes, crops and transportation infrastructure in Haiti, and is now moving toward the southeastern United States. As global warming fuels sea-level rise, Haiti and other Caribbean islands are likely to face more flooding from hurricanes, the International Business Times reports. The New York Times looks at the devastating natural disasters Haiti has already faced in years past.

Democratic VP candidate Tim Kaine only mentioned Honduras once during the debate last night. Read the transcript here, if you’re into that.

For his part, Republican VP candidate Mike Pence nonsensically claimed he and Donald Trump would “end illegal immigration once and for all,” if elected. “And after we secure the border, not only build a wall, but beneath the ground and in the air, we do internal enforcement,” he said.

RELATED: The construction of border walls across the globe has increased nearly five-fold in the last quarter-century, and the rising securitization of international frontiers is killing people like Sergio Hernández Guereca, who was shot along the U.S.-Mexico border in 2010. The Guardian explores the history and significance of this trend in light of Trump’s campaign vow to build a “beautiful wall.”

IN REAL NEWS: The Inter-American Commission on Human Rights has submitted a funding proposal.


The joint proposal consists of an annual budget for the Inter-American System of Human Rights of 18,204,450 dollars, divided as follows: 11,228,250 dollars for the Commission and 6,976,200 for the Court. The goal is to have a budget that can guarantee the sustainability and predictability of the available funds for the two organs of the system, improving its capacity of planning and management. The proposal would increase the institutional capacity of both organs in accordance with their mandates.

Several Mexican senators are supporting a “Tell them to vote” campaign, encouraging their constituents to push family members in the United States to show up at the polls in November and discourage a “campaign of hate against Mexicans,” as one senator told the Associated Press.

Meanwhile on the U.S. side, one of the country’s largest Latino civic groups, Voto Latino, says that it has registered more than 100,000 new voters since November 2015.

Operations are on hold at Mexico’s largest gold mine due to a week-long blockade organized by a trucking contractor and local residents with a range of demands for the Canadian-owned mining company running the site.

Homicide rates in Honduras are expected to have fallen to a rate of 59.1 per 100,000 by the end of this year, says a new report by an observatory that analyzes crime statistics at the country’s National Autonomous University.

In the wake of a nationwide blackout in Puerto Rico last month, the island’s heavily indebted electric company faced scrutiny on Tuesday from a top U.S. official charged with its debt restructuring.

Chile’s Supreme Court has thrown out a treason conviction against Alberto Bachelet, the father of current President Michelle Bachelet, more than 40 years after he was tortured to death in prison for opposing the coup of Augusto Pinochet.

The 24th anniversary of Brazil’s biggest prison massacre, which left 111 inmates dead, was met with a new round of controversy last week when a judge voided the convictions of 74 of the military policemen involved. The Wall Street Journal profiles one of the victim’s daughters who waited for information outside the Carandiru penitentiary complex as a nine-year-old on that fateful day of Oct. 2, 1992.