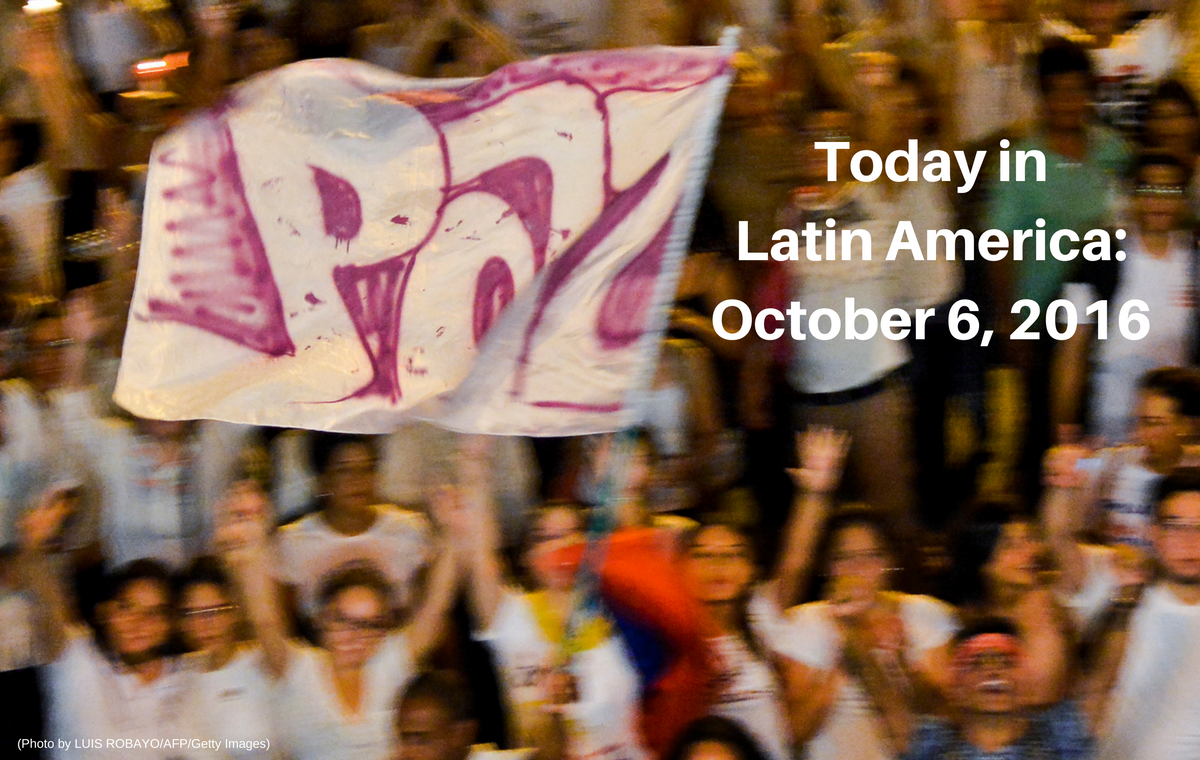 Demonstrators participate in a march for the peace in Cali, Colombia, on October 5, 2016. (LUIS ROBAYO/AFP/Getty Images)

Peace talks are set to continue Thursday between the warring factions of the Colombian political establishment. President Juan Manuel Santos and “No” campaign leader Sen. Alvaro Uribe met for three hours on Wednesday at the Casa Nariño in Bogotá, and local press accounts say they seemed to find common ground. It was the first time the two had spoken since 2010, according to La Silla Vacía.

It’s still unclear what new positions the government will agree to before going back to the table with the FARC in Havana. In a speech after the meeting, Uribe mentioned amnesty for FARC soldiers not guilty of serious human rights crimes, more legal protections for members of the Colombian military and reiterated concerns about demobilized FARC leaders who might be guilty of war crimes running for public office. Other suggestions sounded more vague, like praise of “family values” or concern about passing a peace deal that would “put private initiative at risk.”

Santos asked for patience and said he’d extend the ceasefire, after appearing Tuesday to say it would only last until the end of the month.

The sidelined FARC has said it intends to continue observing the ceasefire and working toward an agreement.

University students organized marches in support of peace that brought thousands to the streets across Colombia. Find pics and videos on Twitter at #MarchaPorLaPaz.

Meanwhile, The New York Times asks: Are referendums even democratic? Read alongside Semana, which contends that a growing consensus of political figures on both sides of the spectrum suspect the peace agreement would have unraveled if the referendum won by a narrow margin.

From Arauca: The ELN, Colombia’s second-largest guerrilla army, is suspected of bombing the Caño Limón-Coveña pipeline Wednesday morning. If true, this would be their second attack on the oil pipeline in the past three months. The group has declared a ceasefire with the government and said last week that it wants to move forward with peace talks with the Santos administration.

Four migrants apparently suffocated to death in Veracruz in the back of a truck carrying them along with more than 50 others, that was abandoned by smugglers driving them toward the United States. Their deaths represent the increasing difficulty of crossing Mexico to get to the United States, especially in light the country’s increased number of immigration checkpoints since the passage of Mexico’s U.S.-backed Southern Border Program.

Puerto Rican voters in the key swing state of Florida overwhelmingly back Hillary Clinton, according to poll by the Center of American Progress and Latino Decisions. A small majority also favor statehood, driven by those born on the island.

And Trump surrogate U.S. Jeff Sessions (R-Ala.) said the GOP presidential nominee was considering some kind of “self-deportation” plan, reviving a once-toxic term famously used by Mitt Romney in the 2012 campaign. Just 33 days to go before the voters put this election out of its misery.

Haiti postponed its presidential election indefinitely after Hurricane Matthew slammed the island on Tuesday morning. The election, which was scheduled to take place on Sunday, has been delayed since January.

The hurricane left four dead in the Dominican Republic and 26 in Haiti as it continued its passage through the Caribbean. The storm left heavy damage in Baracoa, Cuba’s oldest colonial town, and has caused the largest humanitarian crisis in Haiti since the 2010 earthquake.

The U.S. military base at Guantánamo Bayis fine, though.

Central America is being ravaged by its most intense drought in 30 years, putting pressure on food supplies in an already impoverished region—a crisis which Americas Quarterly writes, affects women disproportionately.

The Intercept’s Jeremy Scahill pounded The Daily Beast for “red-baiting” over a profile of Democratic VP candidate Tim Kaine that suggests his meeting with a liberation theologian James Carney who was later disappeared could cause problems on the campaign trail.

American actor Jamie Foxx of “Ray” fame met with Venezuelan President Nicolás Maduro on Tuesday, AP reports. Foxx hasn’t spoken about the visit, but state-funded outlet Telesur said he was there to show his “support for government housing projects.”

Left-wing former Colombian Sen. Piedad Córdoba says she was harassed by police at the airport in Santiago for an hour on a visit to Chile to meet with Mapuche indigenous leaders. Upset at her treatment by police, she says she decided to return to Colombia without leaving the airport.

Two Colombian men pleaded not-guilty to drug trafficking charges Wednesday, after having been extradited to a court in Los Angeles for having allegedly smuggled tons of Cocaine through Venezuela into the United States.

Federal police in Brazil have asked prosecutors to file corruption charges against former President Lula, Reuters reports, citing an unnamed source. It’s not clear what the reported charges are, but they involve Odebrecht contracts in Angola.

If you haven’t been keeping up, here are four ways Brazil’s changed since Dilma was impeached, from The Los Angeles Times writes.

Argentina’s Grandmothers of the Plaza de Mayo have now confirmed the identity of 121 people who were stolen from their parents during the country’s dictatorship. The group revealed a DNA test showing that the unidentified man’s biological mother and father were leftist activists detained in 1976 and never heard from again.

Egalitarian Uruguay: For the third year in a row, the country tops the Americas Society “Social Inclusion Index.” Read the details here.