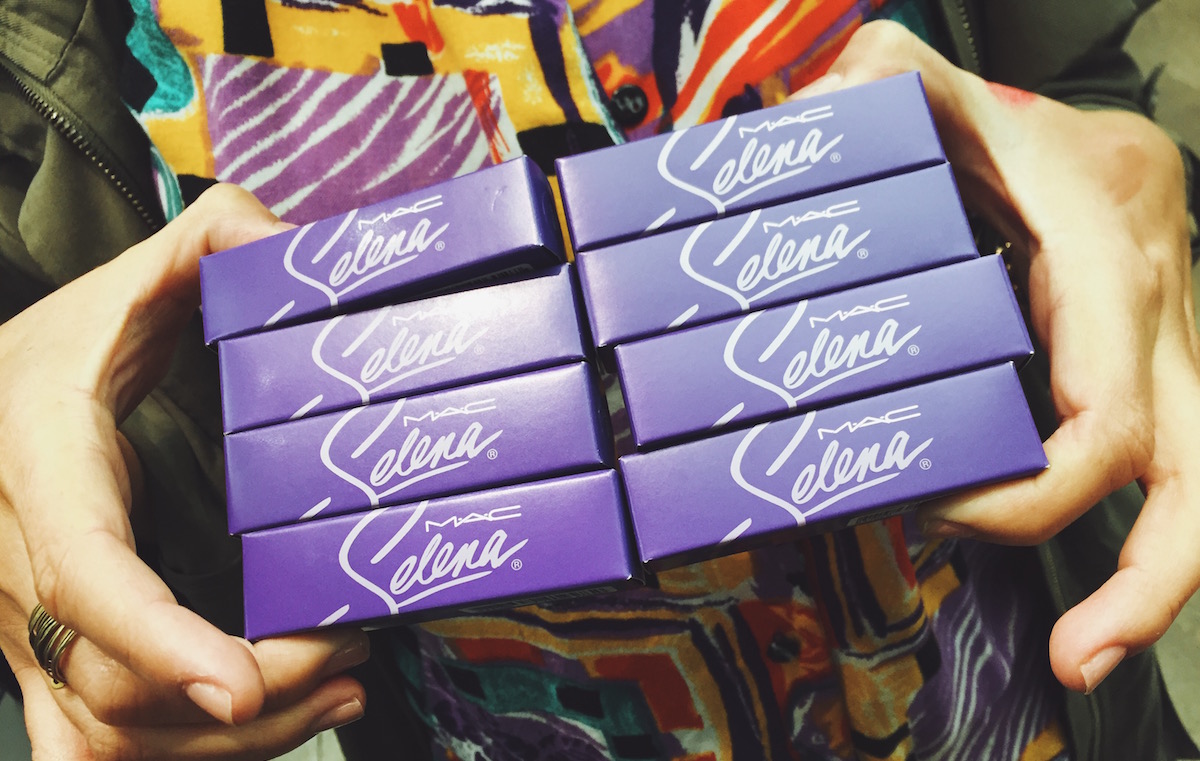 Twenty-one years after her death, Tejano singer and pop culture icon Selena Quintanilla Perez once again became immortalized. It all started when Patty Rodriguez launched an online petition over a year ago with a single mission: to get MAC Cosmetics to release a “Selena Quintanilla for MAC” limited edition collection. A few months and 38,000 signatures later, MAC said the magic words, “It’s happening! We are excited to announce the MAC Selena Quintanilla collection, available in 2016.” Fans of the Tejano singer would soon have the chance to hold Selena-inspired products made by a global beauty brand. The company went on to say, “Like the legend herself, Selena Quintanilla’s fans are an inspiration to us all for their love and enthusiasm.” Her fans clamored and someone finally listened.

Thanks to the efforts of those thousands of fans, that day has arrived.

Outside the @MACcosmetics store in SoHo. #MACSelena launches in stores today. pic.twitter.com/ePDoooFWgj

Latino USA Producer Fernanda Echávarri and I met early on Selena-MAC launch day, October 6th, in the SoHo neighborhood of New York City. Multiple stores in NYC were launching the collaboration, and at that specific SoHo store we visited, the first fan in line, Nicolasa Alamilla, had been there since 6 a.m.

“I’m a different generation of being a Latina woman but I understand the importance of Selena and the legend she has become so I just wanted to come here and be supportive of a young Latina woman who has become an icon and a revolution,” Alamilla said.

The second fan in line, Gerson Sandoval, stood in line before 7 a.m. —after working an overnight shift— just so he could buy his girlfriend Selena makeup. “She wanted to come out and wait but she’s pregnant,” he said. He mentioned that she tried to buy the collection online, but it quickly sold out. She doesn’t know that Sandoval waited in line. He’s going to surprise her with the whole collection.

He was buying the products as a gift, he understands what Selena means to the women in his life. “I was a baby unfortunately when she passed away but I grew up on Selena, especially with my mother, she’s Mexican,” he said. “When you’re Latino, whether you’re a boy or a girl, whatever, every morning you wake up to cleaning and Selena music blasting in the house. ”

Maria Girón was 17 when Selena died. “I always followed her and I was hoping that they would come out with something for Selena and I needed to be here to get her stuff,” she told Latino USA.

As we inched closer to the front of the store, we checked off the items that we’ve had our eye on. Dreaming of You, Como La Flor, Amor Prohibido – all names of Selena songs that had been whipped into creamy lipstick colors. The MAC employees reassured us and everyone in line that they were not sold out, yet.

We made it in! This is for research, obvi. #MACSelena pic.twitter.com/Ds7MrjCXqE

Once we made it into the store, we were surprised Selena wasn’t blasting on the speakers. One employee assured us there was a Selena playlist on rotation and that we just happened to walk in at the wrong time. Could be. It felt like we were outside for at least one Selena playlist rotation. Employees were letting fans in one by one so they could try on the products without interruptions.

Of course, we didn’t need to try anything on. With Selena’s “No Quiero Saber” finally playing in the background, we went straight for the kill.