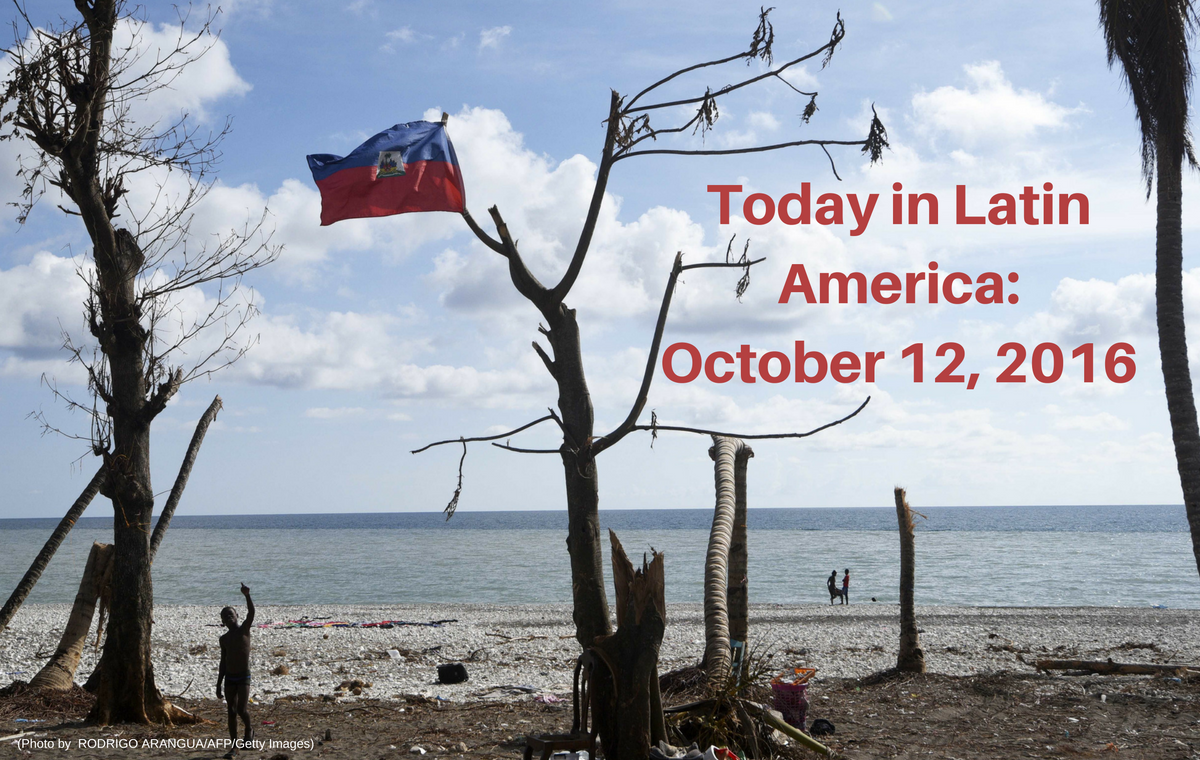 A boy waves next to a national Haiti flag in a tree on a beach destroyed by Hurricane Matthew in Port Salut southwest of Port-au-Prince, on October 11, 2016. (RODRIGO ARANGUA/AFP/Getty Images)

The U.S. government will temporarily stop deporting migrants to Haiti after the country was devastated by Hurricane Matthew, Department of Homeland Security Secretary Jeh Johnson said Tuesday. From AP:


Speaking in Mexico City where he held talks with Cabinet officials on border, migration and security issues, Johnson noted that some flights to Haiti have been suspended in the wake of the storm, which has killed hundreds of people.

“We will have to deal with that situation, address it, be sympathetic to the plight of the people of Haiti as a result of the hurricane,” he said. “But after that situation, after that condition has been addressed, we intend to resume the policy change that I brought about several weeks ago.”

The U.S. had largely suspended deportations to Haiti in the aftermath of the devastating 2010 earthquake. But U.S. officials began to step up removals once again last month, as thousands of Haitian migrants began arriving at the U.S.-Mexico border in Southern California seeking to enter the country.

Local residents have begun to clean up the wreckage as the country awaits humanitarian assistance. Meanwhile, Haitians in Miami appealed to the U.S. government to extend temporary protection status to Haitians in the mainland and allow more Haitians to reunite with their family members in the United States.

A Guardian Opinion piece argues that other countries should respond to this latest tragedy for the Caribbean country as an opportunity to repay centuries of debts.

No big news from the government negotiating table on Tuesday, but a flurry of street protests will continue today. Ongoing mass demonstrations in favor of peace have helped pressure politicians not to lose this opportunity to put an end to the conflict, El Tiempo reports. Demonstrators in Bogota havebuilt a makeshift tent city in the main plaza they are calling a “peace camp.”

FARC negotiator Victoria Sandino tells Semana the group will insist onretaining provisions in the accord supporting gender and LGBT-inclusion in the peace process, despite a conservative backlash. Leaders of the “No” campaign have repeatedly invoked “family values” as part of their crusade to renegotiate the peace agreement.

Colombia’s U.N. mission leader requested approval from the Security Council to allow hundreds of personnel to remain in country to shepherd the peace process, in spite of the Oct. 2 referendum decision to reject the accord.

Looks like “El Chapo” is no longer the king of the Mexican underworld.

Scramble for votes: Puerto Ricans in Florida hustle to register before the Oct. 12 deadline to cast a ballot in the key swing state.

As the economic crisis worsens and doctors continue to flee to the U.S. mainland, Puerto Ricans are forced to wait longer than a year for a medical appointments, Reuters reports.

Russian Defense Minister Sergei Shoigu is eyeing Cuba and other Latin American countries as potential locations for a new military base. Latin Americanist Gregory Weeks told the Miami Herald that he doubts Cuba would agree to any plans, which could be viewed as a threat to the United States, in light of warming relations with the Obama Administration.

Two indigenous activists with the Civic Council of Popular Organizations and Indigenous Peoples (COPINH) survived separate assassination attempts this week, just seven months after their leader Berta Cáceres was shot to death in her home. The attacks come as part of an upsurge of violence against environmental activists in the country that began after the 2009 coup.

Twenty-five African migrants crossing Lake Nicaragua from Costa Rica were stopped by Nicaraguan riot police, El País reports. The migrants, who aimed to reach the United States, had been promised safe passage to Honduras, but were abandoned by their traffickers after arriving in Nicaragua.

Petroecuador, Ecuador’s state-owned oil company, is back in the spotlight after Carlos Pareja Yanuzzelli, a former manager and ex-minister of Rafael Correa’s government, was implicated in a corruption scandal involving offshore accounts in Panama. President Correa has called it “the worst corruption scandal in 10 years.”

Former Peruvian president Ollanta Humala and his wife are under investigation by the attorney general’s office for allegedly laundering money tied to past campaign donations.

Rio de Janeiro state’s security chief resigned Tuesday after ten years of service following shootings in the Pavao-Pavaozinho favela on Monday that spilled over into the popular Ipanema and Copacabana neighborhoods, killing three people and shutting down the streets.

A year after Zika virus broke out in Brazil, The Guardian documents the health toll it has exacted, tracing the impacts of microcephaly.

The Uruguayan government approved visas for the family of a Guantanamo prisoner, who has performed a hunger strike for the past two months to leave Uruguay and reunite with them.