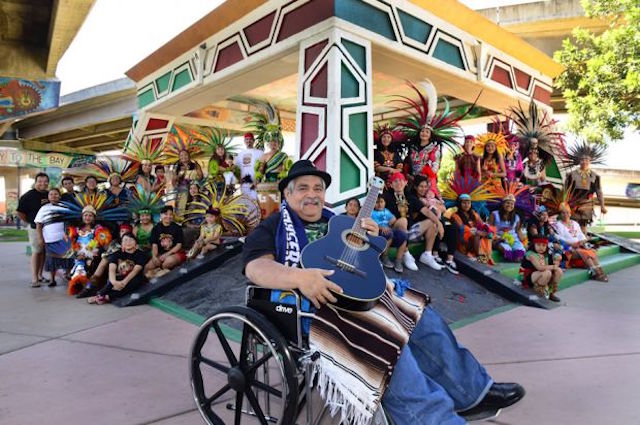 On early Saturday morning, the daughter of Ramón ‘Chunky’ Sánchez shared the news on her Facebook page that the legendary Chicano musician and activist had died, according to local reports from San Diego.

Named a NEA National Heritage Fellow in 2013, Sánchez was a respected and beloved Chicano leader. His death has resonated throughout the Chicano community, both in San Diego and beyond.

VIVA CHUNKY! It was sad to learn of the passing of Chunky Sanchez, who dedicated himself for years to the cause… https://t.co/hGGoKvCfIZ

The San Diego CCD’s tribute to “Chunky” Sanchez will live on in the mural on our car park at the Cesar Chavez Campus. pic.twitter.com/PxHbaJJRSc

Herman Baca, president of the Committee of Chicano Rights, wrote in a tribute on Monday that “Chunky’s weapons for the Chicano Movement’s struggle were his guitar and music. His music was the political cement that kept the Chicano Movement in the community together (for over 45 years) in our struggles for self-determination to end the systemic racism and discrimination against our people.”

In 2012, StoryCorps featured one of Sánchez’s childhood stories as an animation. That video has gotten more than 227,000 views:

Sánchez used his stories and music to promote Chicano rights and fight for the community. For example, his “Chicano Park Samba” song with his band, Los Alacranes Mojados, became the definitive musical account of how Chicano Park in Barrio Logan came to be in San Diego.

According to NBC San Diego, “Sánchez was born in Blythe, California, to Mexican immigrant parents, both of whom were farm laborers. Growing up, he also worked as a farm laborer while he perfected his musical talents and learned to compose his own songs, which became known for their political messages in the Chicano community. Sanchez often performed at rallies and marches for the United Farm Workers Union, many times at the request of César Chávez.”