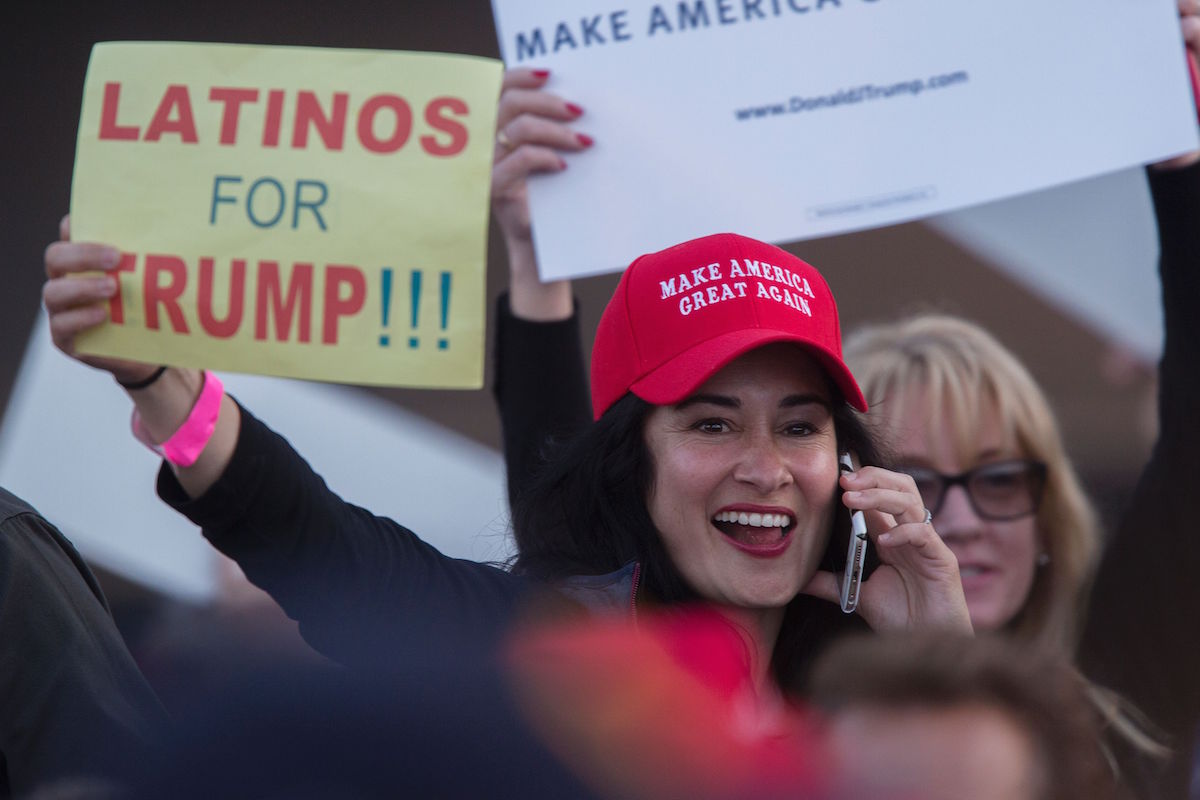 As the post-election questions continue regarding the Latino vote and whether or not President-elect Donald Trump outperformed Mitt Romney in 2012 with this demographic, Latino USA contacted several Latino Trump supporters through the Latinos/Hispanics for Donald Trump Facebook community to tell us why they voted for the country’s 45th Commander-in-Chief. Three supporters agreed to send us answers to our questions.

Here is what they told us:

What is your name, where do you live and what do you do? Also, how old are you?
My name is Jim Tolentino. I live in Julesburg, Colorado. I am 36 years old and I am a truck driver.

Do you identify as Latino? Also, what if your country of origin?
I was born in the U.S.A., and I identify as American-Mexican.

Why did you support Donald Trump?
The reason why I supported Donald Trump is we need a president who cares for the United States. We need secure borders, better education and we need our jobs back.

Why did the media get wrong about Latino support for Trump?
The media is on the side of career politicians such as Barack Obama and Hillary Clinton, and not on the side of the American people. I believe the Latinos that are here want to live in a secure and free nation, free of the cartels and the violence.

Did Trump’s rhetoric about Mexican immigrants, Judge Gonzalo Curiel and Alicia Machado bother you? Why or why not?
As far as President-elect Trump’s rhetoric about Mexicans, that doesn’t bother me at all. It’s the same sentiment that I feel. We do have illegals that cross into our nation that are troublemakers, but at the same time there are hard-working people who come here to work for their families. With this being said, we do not know who else is crossing besides Mexicans, and this poses a serious security risk for the United States. First and foremost, we need to close our borders temporarily, work on our immigration policy and have a vetting process in place, then reopen our borders, so immigrants can come to live and work in a secure nation that is safe from terrorism. Judge Curiel and Alicia Machado do not bother me. They are minor bumps in the road. Every politician or business owner will have detractors. It’s part of life.

What is your name, where do you live and what do you do? Also, how old are you?
Katherine Vasconez. I live in Los Angeles. I’m a corporate lawyer, and I’m 30 years old.

Do you identify as Latina? Also, what if your country of origin?
Yes!!! I was born in Ecuador. My father is a U.S. citizen. I have citizenship through my father. My mother is from Ecuador. We moved to the U.S. when I was just 1-1/2 years old, when my father joined the U.S. Navy. He’s a veteran.

Why did you support Donald Trump?
He respects our veterans and my father and his service mean the world to me. He also represents the voice of many that feel disenfranchised with the current system. As much as I want a woman to be President someday, I believe Donald will make the best President for the state of our country at this time. His tenacity and persistence and ability to prove others wrong is exactly what I saw in him from the start and he has proved me right. As a Latina, I believe in hard work and the way Donald campaigned was hard work.

Why did the media get wrong about Latino support for Trump?
The media wants to believe what is convenient for them to believe. They create their own reality. Latinos and other minorities have been exploited by the system for too long. We too feel disenfranchised.

Did Trump’s rhetoric about Mexican immigrants, Judge Gonzalo Curiel and Alicia Machado bother you? Why or why not?
No, it did not. I do not take comments made of others as a personal attack to myself. I hold myself under high standards and let my actions speak for me. If we lived by the comments others made of us, our spirits would be easily defeated.

What is your name, where do you live and what do you do? Also, how old are you?
My name is William Fernandez. I live in Sterling, Colorado, and I’m 37.

Why did the media get wrong about Latino support for Trump?
All the media was showing was how Trump wanted to build a wall and send back all the Latinos that are over here illegally, but what he actually wants to do is help out and encourage the Latinos that are here and want to be here to become legal law-abiding citizens in America. I agree with Trump that if you’re Latino and you’re over here to cause problems, then yes you need to be deported and never allowed back. My father, uncles,aunts, cousins, they all came over to the United States from Mexico to better their lives, and they have done so. My father retired from the railroad seven years ago after working for 32 years and he is a Trump supporter. He too believes if Latinos want to cause problems while over here, they need to be deported.

Did Trump’s rhetoric about Mexican immigrants, Judge Gonzalo Curiel and Alicia Machado bother you? Why or why not?
No, because I never seen that in the media.

This Friday, Latino USA will premiere its post-election show, right here on LatinoUSA.org. Earlier this year, our show spoke with Latino Trump supporters during the primary season.

3 thoughts on “Why Some Latinos Voted for Donald Trump”