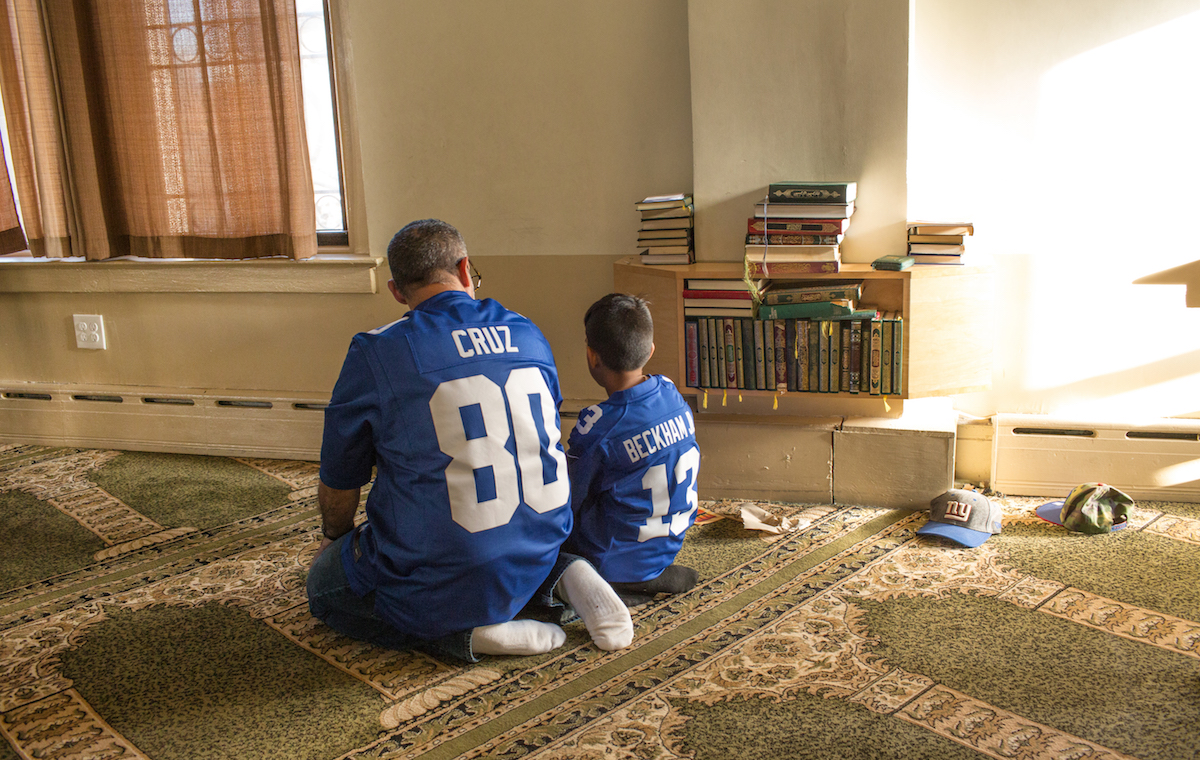 Editor’s note: For three months, photojournalist Federica Valabrega met with Latino Muslims in New Jersey. In her photo essay, Valabrega captures pivotal and everyday moments: a man poses with his conversion certificate; women pray during Salat al-`Asr; and a diverse Muslim crowd gathers at Union City’s Latino Muslims Day. Valabrega’s photographs exhibit how Latino Muslims are building community, and inviting non-Latinos and non-Muslims in unity and celebration. Valabrega hopes to continue traveling around the United States and Latin America to capture more of the Latino side of being Muslim.

The photo essay is being released in conjunction with the latest Latino USA episode, “Muslim & Latino.”

The following are captions and photographs taken by Valabrega: Women praying during Salat al-`Asr, the afternoon prayer at the North Hudson Islamic Educational Center during Latino Muslims Day on November 13, 2016. Organized by the masjid (Arabic word for “mosque”), Latino Muslims Day was meant to foster communication between Latinos and non-Latino members within the community. Gilberto Valdes Ramos poses here with his newly received conversion certificate from the North Hudson Islamic Education Center in Union City, New Jersey. His Muslim name is now Ahmed Abdullah. Gilberto is Cuban, and he took his Shahada (the confirmation of faith to Islam) a year ago. Arianna (left) and Alannah (right) K. are 11-year-old twins from Hackensack, New Jersey. Their mother, Khadijah Tanju (she took her Muslim name from the Prophet Mohammed’s first wife and first follower), is Colombian and their father is from Warsaw, Poland. The twins decided to convert alongside their mother about two years ago. This decision came after Khadijah had remarried a man from Turkey and she found herself wanting to immerse herself in this faith. Since their conversion, the twins have started going to Muslim school where they are required to wear a uniform. They are, on the other hand, not allowed to wear the hijab or any other Muslim garment while visiting at their father’s home, because he still has not accepted their conversion to Islam. Arianna (right) dreams to be a marine biologist and Alannah (left) wants to become a photographer. The twins take judo classes every Monday and Wednesday night in North Bergen, New Jersey. They do not like to wear their hijab to class because they do not want other kids to ask them questions. Ester Baez is from Bensonhurst, Brooklyn. She usually goes to a different masjid in Bay Ridge, but today she wanted to come celebrate with her older son in Union City. Ester has had a very painful life from drug abuse and other addictions, which cost her the custody of her eight children. Her parents were given custody. Then about a year ago, she found Islam though her oldest son, who introduced her to this faith. Soon, she stopped drinking and using.

Ester is now adjusting her Dominican heritage to the newly accepted faith. She has also regained custody of two of her younger children and is fighting to get custody of the others. Ester finds daily challenges in combining her two identities,  but she says she has never felt more at peace and focused as she is now. Here, she poses with three of her children. Wesley Lebron (center), also known as AbdurRazzaq Abu Sumayyah, sits here with his whole family at his mother Teresa’s house. His abuelita Teresa, who is hugging him in the photograph, calls him “malandro” because he never calls her like he used to do when he was younger. Wesley is a first generation Puerto Rican who converted to Islam in 1998 together with his wife Alejandra (far right in green hijab). They have two children: baby Ismael and 13-year-old Sumayyah (right in red hijab). Wesley is now the New Jersey coordinator, national speaker, and instructor for IslamInSpanish, an organization fostering the assimilation of Muslim and Hispanic values around the United States for Latinos who decide to convert to Islam. Khadijah enjoys an afternoon out playing basketball with Arianna, one of her twin daughters. Khadijah does not mind wearing her hijab outside, but her daughter is still not comfortable with it, especially in public parks because she fears judgment and disrespect. Eleven-year-old Arianna says she would rather not have to face such challenges for now.

From Every Walk of Life The North Hudson Islamic Educational Center hosts Muslims from every walk of life, where African American (left), Palestinian (center), Syrian (center right) and Latino (right) Muslims are listening and recording the speaker’s conversation about her conversion to Islam during Latino Muslims Day. Kids playing on the floor of the masjid in Union City in between prayers.

One thought on “Muslim & Latino: A Photo Essay”