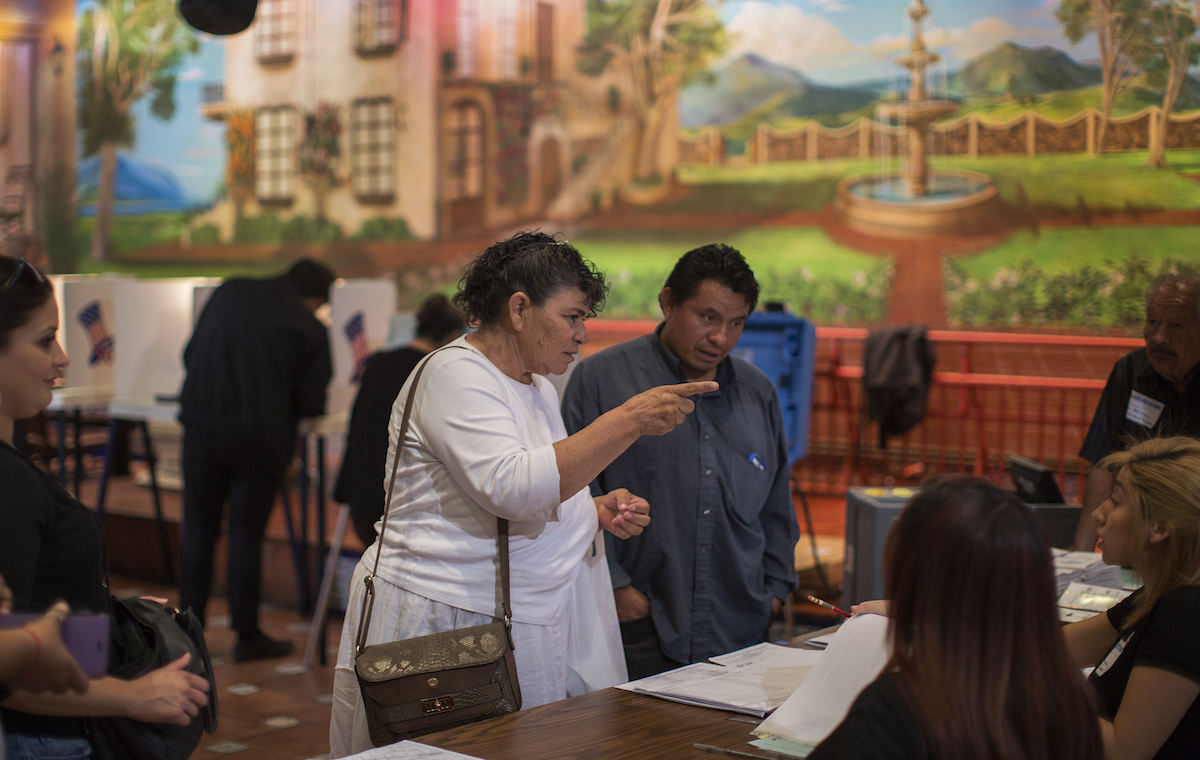 Latinos vote at a polling station in El Gallo Restaurant on November 8, 2016 in the Boyle Heights section of Los Angeles, California. (Photo by David McNew/Getty Images)

As the debate surrounding how the Latino vote played out in the 2016 election, a new analysis by Hispanic Economics is focusing on the presidential voter preferences of U.S. Latinos who speak solely indigenous languages. In an executive summary provided to Latino USA by Hispanic Economics’ Louis Nevaer that will be made public on December 15, the post-election analysis concluded that “the repudiation of the Democratic candidate was strongest among Hispanics/Latinos who speak an indigenous language.”

In an interview with Latino USA, Nevaer also said that only 40% of U.S. Latinos who speak an indigenous language voted for Hillary Clinton.

“Basically, what we are saying is that 60% [of this voting population] voted to punish Obama and voted against Hillary,”Nevaer added.

The findings, according to Nevaer, was based on about 2,200 interviews.

In addition, the executive summary that Nevaer provided made the following conclusion:

In this analysis, we found that a substantial portion of the Hispanic/Latino vote repudiated the failure of the Obama administration to implement comprehensive immigration reform. Hispanic/Latino voters expressed anger over the failure to legalize the millions of “Dreamers” who arrived in this country as minors and live in immigration limbo; at the mass deportations implemented by the Democratic administration—where Obama is derided as the “Deporter-in-Chief”—on a wholesale basis; and the vague promises Hillary Clinton made.

More than a quarter of Hispanic/Latino voters wanted something different—and they voted for a change since the status quo was no longer tenable to them. And the repudiation of the Democratic candidate was strongest among Hispanics/Latinos who speak an indigenous language, evidence of how little understood this constituency remains.

In consequence, this analysis focuses on language comfort levels. English-dominant Hispanics/Latinos tend to be U.S.-born and are, for the most part, proficient, but not fluent, in Spanish. Spanish-fluent Hispanics/Latinos tend to be immigrants or first-generation U.S. citizens living in predominantly areas of heavy Hispanic/Latino population who speak Spanish better than they speak English. Hispanics/Latinos who speak an indigenous language tend to be members of an indigenous nation community that continue to emigrate to the U.S. and are, almost universally, the least likely to be assimilated into the mainstream of Western life. (They tend to be acculturated to Mexican society and alienated from U.S. society; seldom are they assimilated in either society.)

The executive summary also shared its findings across several states. For each state listed, the Latinos who solely spoke an indigenous language showed the least support for Clinton: According to Nevaer, of the 27.3 million U.S. Latino voters in 2016, 18% of these voters are Latino voters who solely speak indigenous languages.

“If you want to incorporate and reach out to the entire community in the Hispanic diaspora, you have to recognize that there are people who don’t speak Spanish or English,” Nevaer said. “You have to understand, ‘what do we need to approach these people?’ Second of all, if we’re dealing with a population that that’s still clinging or thinking or working along the lines of pre-Hispanic community patterns, is that ok, or if that is not ok, how do we educate them in a different way or reach out to them? So, for example, if you had 10 Hispanics who are eligible to vote but they decide because they live in the same house or are part of the same family, the only one will go vote and speak for them, how do we impress upon them that that’s how you do it in the old country but here everyone can vote if you are eligible to vote and everyone should vote.”

You can listen to the full 18-minute conversation with Nevaer here:

At the end of the executive summary, the report also criticized U.S. Latino media, particularly Univision anchor Jorge Ramos and Latino USA anchor Maria Hinojosa, as well as polling firm Latino Decisions, which has been critical of national exit polls about the 2016 U.S. Latino vote:

The failure of the media to understand the dynamics of the indigenous Hispanic/Latino mindset surprises specifically because two of the leading voices in the Hispanic/Latino media—Jorge Ramos and María Hinojosa—are Mexican-born and presumably familiar with the “conflict” between gente de razón versus gente sin razón, a shorthand for how Westernized Mexicans deal with non-Westernized Mexicans.

Compounding the challenges Hispanic/Latino voters faced, both Jorge Ramos and María Hinojosa were partisan in their reporting of the U.S. presidential campaign. With Trump’s victory, these reporters’ hostility to the president-elect brings into question the access they will enjoy to the White House under the incoming Trump administration. Trump, after all, having won after writing off the Hispanic/Latino vote, has no incentive, or apparent inclination, to speak to Hispanic/Latino journalists or the Spanish-language media.

Are either Jorge Ramos or María Hinojosa familiar [sic] an indigenous language?

This is paramount since, for many indigenous-speaking Hispanic/Latino residents in the U.S., speaking Spanish, by virtue of being a language of colonialism, is as off-putting as if they were spoken into any other language. In other words, for most Hispanic/Latinos who speak an indigenous language, when Latino Decisions conducts a Spanish-language survey or a Spanish- speaking reporter seeks them out, it is as much an act of cultural imperialism as if they were surveyed or addressed in English.

That alone remains the greatest obstacle to reaching this segment of the Hispanic Diaspora in the U.S.