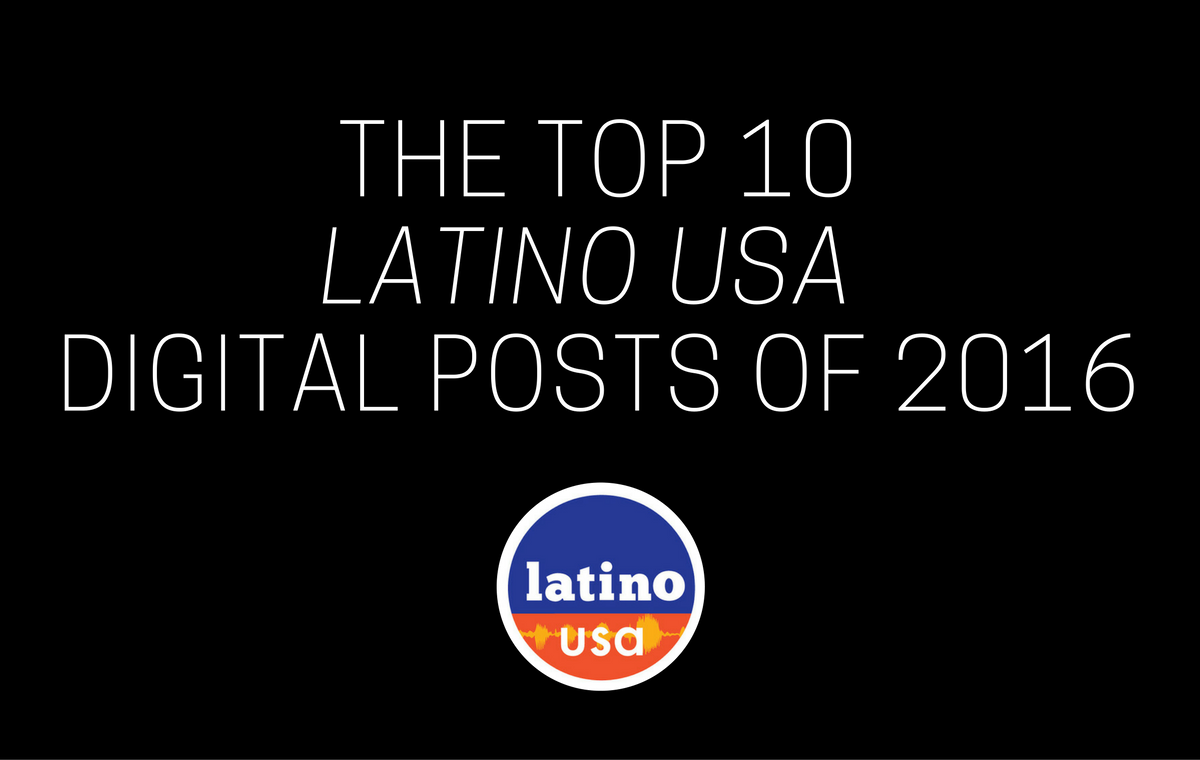 Because Maria Hinojosa strongly believes that all of us at Latino USA have to take two weeks off for the holidays, this top 10 list of the most popular LatinoUSA.org posts of 2016 is happening a little earlier this year.

Don’t worry, even though our offices are closed, we will still have three episodes dropping the next three Fridays, starting on December 16 (which is all about tech’s leaky diversity pipeline). So we will make sure all these three episodes will be up on our site, but in the meantime, I do want to share the great news that 2016 was the most popular year for LatinoUSA.org ever. When we started the year, our digital team made a conscious effort to produce news stories and commentary pieces on the days when a new Latino USA episode wasn’t launching. Or in other words, what do we do on this site from Monday through Thursday?

The result? Our LatinoUSA.org digital team published more than 300 pieces. Combine this with all the episodes and audio stories from our talented producers, and there was a lot of content on this site in 2016.

But which digital posts were the most popular in terms of the most visits and reads? Don’t worry, I curated the list, from 10 to number 1. One thing you should note: when I say “post,” I mean anything LatinoUSA.org published: whether it was an election story, a news story, a video we featured, an individual audio segment or a full Latino USA episode. Also, I didn’t include this site’s most popular destinations, which are our Home page (makes sense), our Episodes page (makes even more sense) and our About section (so you can read our bios?).

9. Documented vs. Undocumented (VIDEO)
When our team saw videos that were generating discussion and debate online, we would usually do a quick post to inform our audience about it. This Univision video a side-by-side day in the life of two families: one that has legal status and one that does not.

8. In New Supreme Court Amicus Brief, Obama Administration Questions Puerto Rico’s Commonwealth Status
This story is technically from 2015 (December 28, to be exact), but it is no surprise to our team that many of our readers are interested in the relationship between Puerto Rico and the United States. And they also wanted to study the actual amicus brief. Click here to read it.

7. Matt de la Peña Becomes First Latino Male Author to Win Prestigious Newbery Medal
Who knew that this very basic story about an award-winning author would hit home with so many? Read it here.

6. Latinx: The Ungendering of the Spanish Language
In January, we were one of the first outlets to broadcast an audio report about the Latinx debate. Here is what Sarah Hayley Barrett and Oscar Nñ produced.

5. The Invention of Hispanics
This 2015 audio story produced by Camilo Vargas and Marlon Bishop continues to get attention and listeners. I wonder why.

4. Vicente Fernández Just Did a Corrido for Hillary Clinton (VIDEO)
It was a rather unique election season, to say the least, but few moments will ever top Chente singing to his fellow Latinos about La Hillary. Catch it here.

3. ‘No Mexicans Allowed:’ School Segregation in the Southwest
Produced by Fernanda Echávarri and Marlon Bishop, this audio story from the Blood and Betrayal in the Southwest episode explored the history of segregation against Mexicans in the United States.

2. Rep. Filemon Vela’s Scathing Open Letter to Donald Trump (FULL TEXT)
A lot out outlets were just focusing on the end of Rep. Vela’s letter, so we decided to publish the entire letter here.

1. The History of Anti-Mexican Violence and Lynching
Also from the Blood and Betrayal in the Southwest episode, this audio story by Marlon Bishop and Julia Shu was shared on Facebook more than 34,000 times. And that’s just Facebook. Give this hidden history story a listen.

Thank you again for a historic year for LatinoUSA.org. I wish you all the happiest of holidays, and we’ll do this again in 2017.