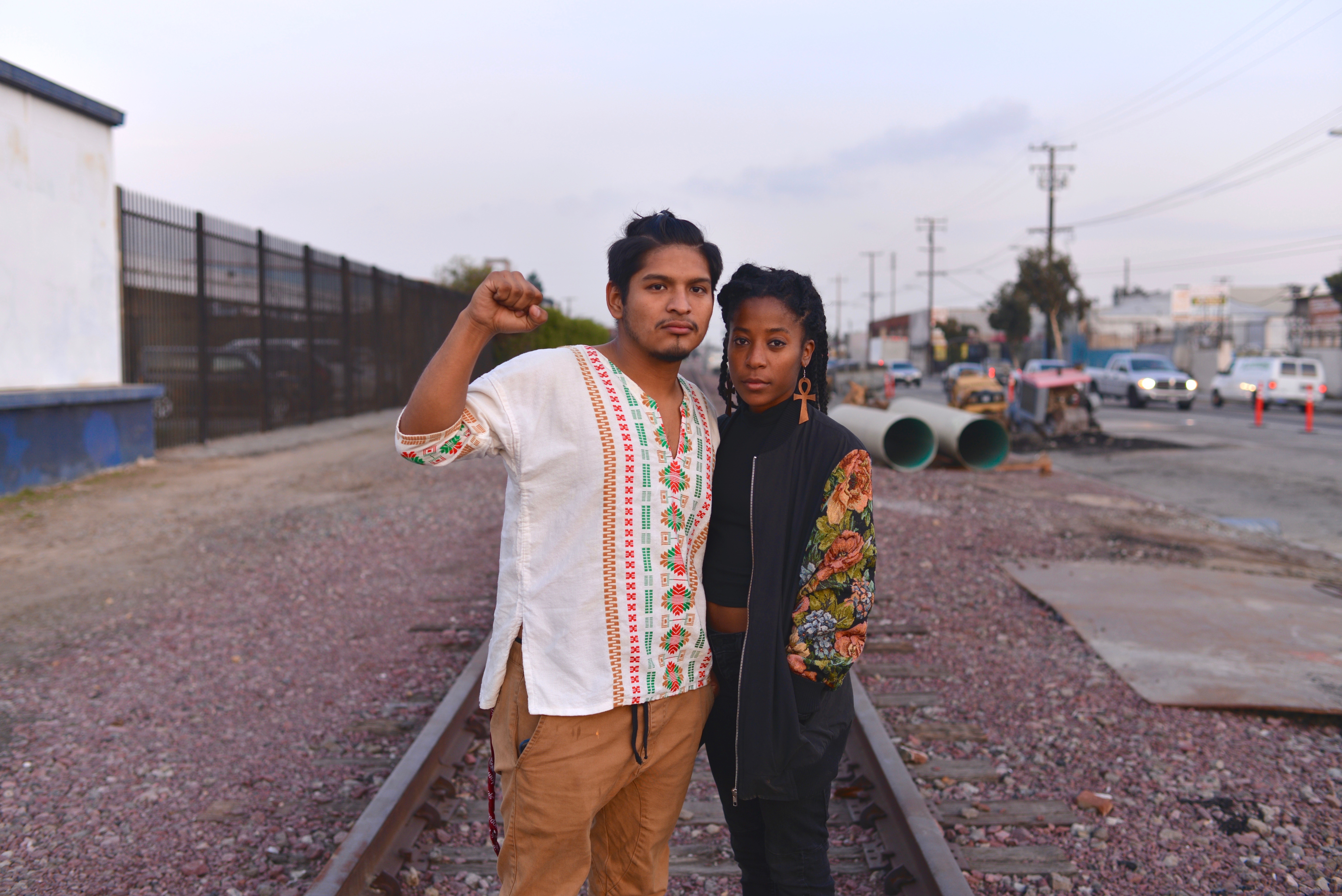 Alfredo Gama and Audrey Edwards : "Black and Brown people often see each other as competition, but we are fighting for the crumbs that white supremacy leaves us with. We need to be aware that there are forces out there that are trying to divide us." Image by Walter Thompson-Hernández

Melanin(a) is an environmental portrait series dedicated to the beauty and struggle of black and brown relationships in Los Angeles. In one of the most divisive moments in the history of the United States, I ask: How are black and brown couples making sense of the current political and racial climate? How does the increased normalization of violence on the black and brown body throughout Los Angeles impact intimacy? And what does a black and brown future look like in the age of Trump? By exploring these narratives through visual ethnography, Melanin(a) aims to build on the existing work of artists and activists who have and continue to create platforms for the preservation of black and brown lives in Los Angeles and beyond.

Hilario, Aide, and Sebastian: “Hatred will be more prevalent in our society.”

Lexx Valdez and Halline Overby: “We have our own issues as black and brown people but there’s also a togetherness that we both share. And we have to look for each other. We have to band together more than what we did before and really look out for each other’s families beyond our relationship right now.”

Aaron and Norma: “We are very pro-brown and pro-black.”

Soleil Boyd and Jose Hernandez: “I’m very aware of anti-black racism. I read about it, I study it, and I experience it but I couldn’t believe what Trump was saying. I didn’t believe it. Jose was offended and he was hurt, but I couldn’t even comprehend what was being said and I thought that there was so much about his life that I didn’t understand and it opened up lines of communication about race for us.”

Cecilia Whalen and Cleveland Whalen: “When Trump got elected, it was like stepping back in time. And I’m not naïve about the racial tension that is out there. I just think that people were keeping it under wraps for so long and now that the leader of the country is going to say it then somehow everyone who feels like that is going to be active. It is going to push us back very far.”

Erin Whalen and Garrett Kynard: “Black and brown love is a perpetual affirmation of our lives as queer men of color in this era. It means having a home to process what we go through as black and brown men. It also means partnering with our families to help them go through what is happening in the Trump era because they are scared about the hate and oppression that we go through.”

Jamie Trujeque and Stacey Trujeque: “Black and brown love has risen out of the depths of struggle, pain and perseverance.”

Claudia Lira and Shaye Ogbonna: “Black and brown love is knowing that we will be raising a thoughtful, kind daughter and will probably be Trump’s worse nightmare.”

Deb Vargas and Erica Edwards: “Trump means that we can’t be indifferent anymore. We have to dream and we have to be ready in ways that we haven’t before and we have to be willing to do the work. For black and brown love, it means doing the work in a very real way and not seeing our histories as distinct and not to collapse them but to be humble and vulnerable enough to cross histories and boundaries in a trump world that would want us to be separate.”

Kaelyn Rodriguez and Daniel Chavez: “Trump is a threat and he is a danger and it means that we have to get ready and be ready and we have to be more intentional about racial coalitions. Right now it’s just about being able to come together because he represents a real danger to our lives.”

Cristina Arredondo and Sherman Ratliff: “Trump is empowering racist people who were hiding in the shadows. And we’re not just looking out for each other anymore. It’s about both of our families. I worry about my parents because they don’t speak English. I worry about his mom when she goes to work. And I worry about eventually being a family and having kids within these next four years.”

Raheem Dawson and Christy Dawson: “It can be really disorienting and it can almost seem like an insurmountable task to survive as a black and brown couple through this, but if you step away from that for a moment and really focus on your person and your relationship there is still ways to see the light and I look at her and the world is an alright place.”

Koatzin Cruz and Chaz-Ashley Cruz: “Our bodies will be at stake now that Trump has become president. And being together right now is a political resistance because whether by law or by social status, black and brown love has always been undermined and historically not valued. Resistance is no longer just about words.”

EDITOR’S NOTE: The views expressed in this piece are solely those of the author and the people he photographed. They do not reflect the views of Latino USA.

Walter Thompson-Hernández is a Los Angeles-based multimedia journalist and current doctoral student at the University of California, Los Angeles (UCLA). His stories and research have been featured by NPR, CNN, BBC, Fusion, Los Angeles Times, Remezcla, and UNIVISION.