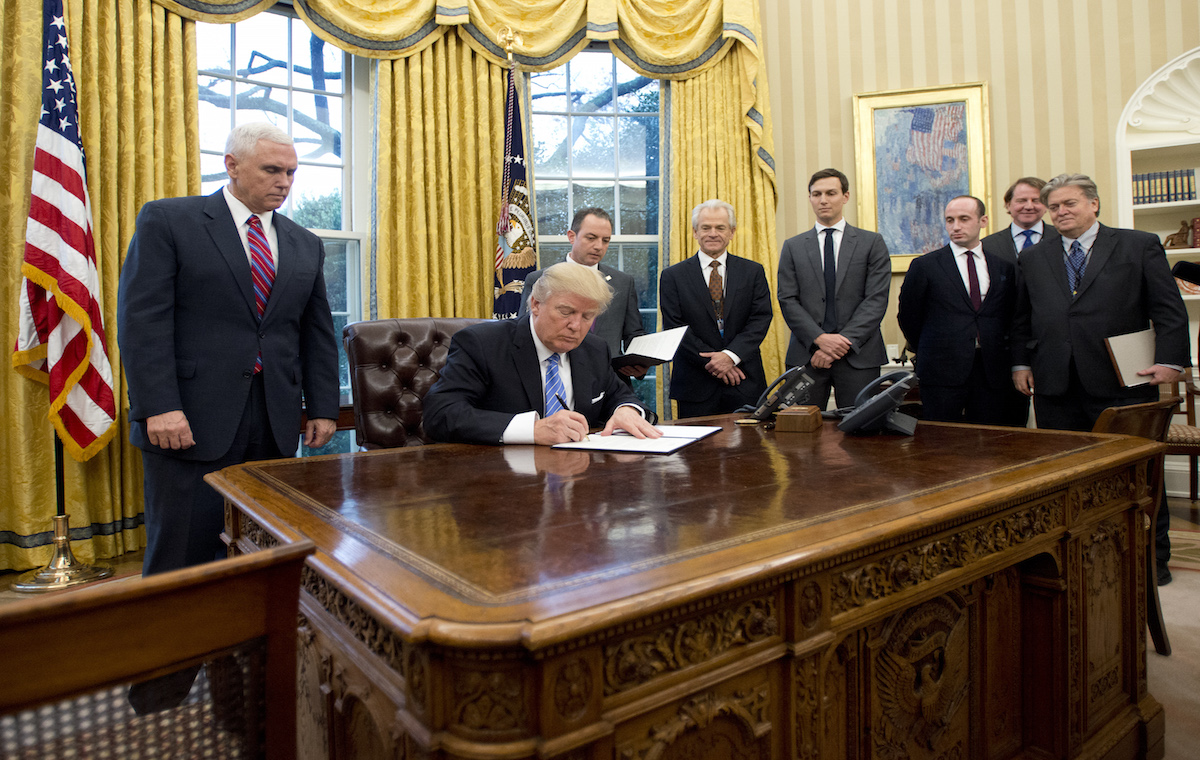 President Donald Trump signs the first of three Executive Orders in the Oval Office of the White House in Washington, DC on Monday, January 23, 2017. (Photo by Ron Sachs - Pool/Getty Images)

“With no immigration action today, Trump left us at ‘stay tuned.’ We have taken Trump at his word, so we believe it’s not a question of if, but when,” Mijente’s Marisa Franco told Latino USA.

“Today was a rollercoaster of emotions for many DREAMers across the country,” said undocumented activist Juan Escalante, digital campaigns manager for America’s Voice. “By keeping uncertainty alive, Donald Trump’s White House is creating harm to DREAMers who are currently working at their jobs, studying in schools across the nation and carrying out their responsibilities like the bright young Americans that they are.”

For the past week, speculation ran rampant within immigrant rights circles that the Trump administration would repeal President Barack Obama’s 2012 executive action that created the Deferred Action on Childhood Arrivals (DACA) program. Anywhere between 750,000 and 800,000 DACA recipients have received two-year work permits and a temporary shield from deportation. In addition, Trump had made Day One campaign promises that he would remove federal funding from sanctuary cities, start working on a border wall and increase deportations.

Earlier this month, during his confirmation hearing, Attorney General nominee Jeff Sessions said that it “would certainly be constitutional” to repeal DACA, but on Sunday, White House Chief of Staff Reince Priebus suggested that the Trump administration is trying to find a working solution with Congress when it comes to DACA. A bipartisan Bridge Act was introduced in the Senate late last year.

“The DACA program must stand until a sensible legislative solution is found, there is no question about it,” Escalante said. “Terminating it without a legislation being signed into law would disrupt my life, and the lives of hundreds of young people across the country.”

In a press briefing on Monday afternoon, White House Press Secretary Sean Spicer said that “the President has been clear that he was going to prioritize the areas of dealing with the immigration system, both building the wall and making sure that we address people who are in this country illegally. First and foremost, the President has been very, very clear that we need to direct agencies to focus on those who are in this country illegally and have a criminal record or pose a threat to the American people. That’s where the priority is going to be and then we’re going to continue to work through the entire number of folks who are here illegally, but right not the clear focus is on that.”

When pressed later in the press briefing if Trump would repeal DACA through an executive action, Spicer said that he “didn’t have anything further on the executive action front,” referring back to the President’s immigration priorities. He also said that the White House does not have legislation from Congress now, and that people should “give us a little of bit of time. We’ll see what Congress moves forward with, and then I’m sure we’ll have a further readout on the executive order piece and on the legislation.”

Rep. Luis Gutiérrez told Latino USA that Monday’s news from the White House indicated that he was “not sure what [Trump] will do to target immigrants and immigration.” The Illinois Democrat also said that “the new President has surrounded himself with the most extreme policy advocates of the anti-immigration movement, pulling from Capitol Hill, the anti-immigration advocacy groups, and the so-called ‘Alt-Right’ movement of nationalists and white supremacists. ”

“The opponents of immigration have an extensive wish list of measures to target refugees, immigrants and asylum seekers, and they are pushing the new President to take immediate action as a symbolic gesture to the voters who supported him in November, even though Trump was supported by a minority of American voters,” Gutiérrez added.

Franco also said that the immigrant rights community will continue to stay engaged.

“The challenge to the immigrant rights community will be to maintain the magnitude of action and defense,” Franco said, “whether it is the revocation of DACA or an expansion of immigration enforcement which will worsen the situation for the millions of immigrants who already lack protection from deportation.”

Meanwhile, POLITICO reported that U.S. Citizenship and Immigration Services is still accepting and renewing DACA applications. It has not been instructed by the Trump administration to stop the process.

NYT: Latinos Have Highest COVID-19 Infection Rate In The Country

NYT: Latinos Have Highest COVID-19 Infection Rate In The Country