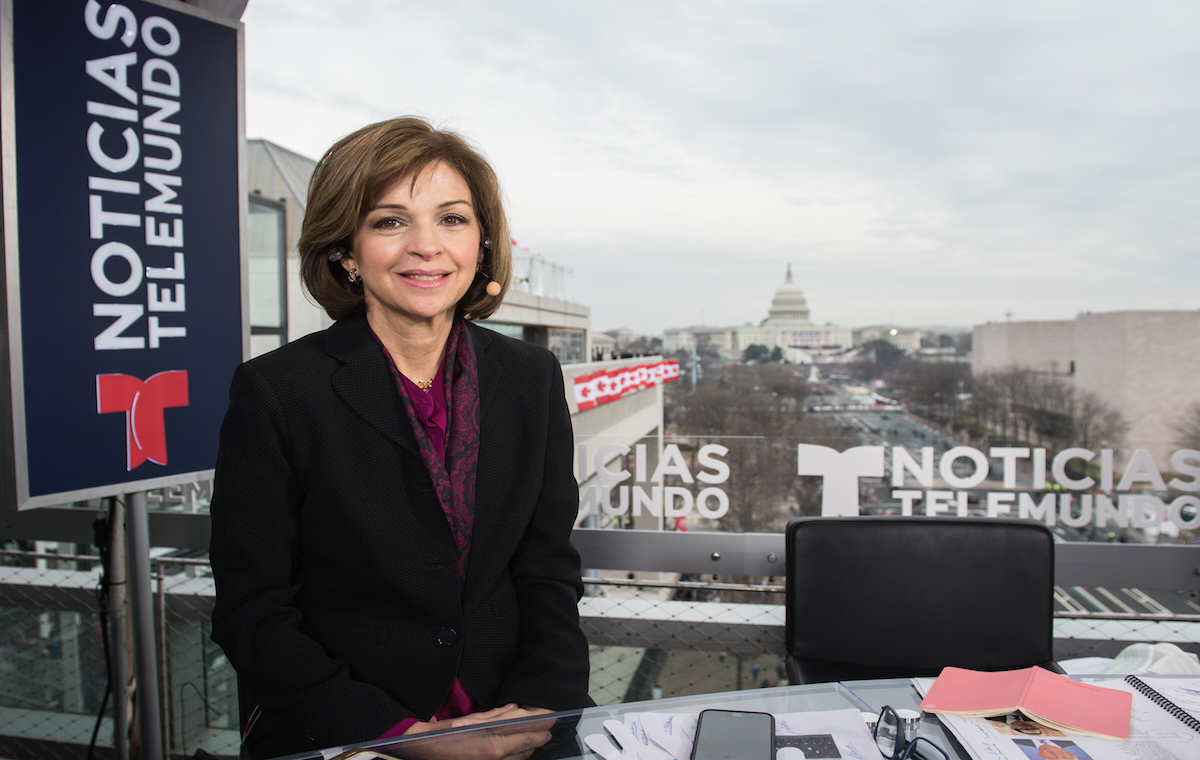 Helen Aguirre Ferree participates in the Telemundo Inauguration broadcast at The Newseum on January 20, 2017. (Photo by Noam Galai/Getty Images)

In a January 30 interview with Phoenix’s KJZZ, special assistant to President Trump and White House director of media affairs Helen Aguirre Ferré addressed several topics, including why there are no Latinos in Trump’s cabinet and the latest immigration executive actions that have raised questions within the Latino community.

Here is a transcript from a shorter edited interview KJZZ posted. To listen to the complete 17-minute interview with Ferré, click on this link from KJZZ.

Phil Latzman of KJZZ: You might be one of the highest-ranking Latinos in the entire Trump administration. There are no Latinos, Latinas, in the cabinet. Does that concern you, that sort of lack of diversity?

Ferré: There is a senior advisor, Carlos Díaz Rosillo, who’s a senior advisor to the President. He’s very prominent in this administration and he works with interagency affairs. There are a number… there’s going to be 4,000 employees that are going to be a part of this administration. Certainly, you’re going to be seeing very many. We have a Deputy Assistant to Public Liaison Jennifer Sevilla Korn and she’s Hispanic. So there are many others who are here. It’s not about… and I think the President, Phil, was so spot on when he said it in his inaugural speech: it’s not about being, whether you’re black or you’re brown or you’re white, we all bleed the same patriotic blood. We’re all in this together. So what really, I think is of greater concern to Hispanic families and to many others is: what are the policies? Are they policies that are really going to benefit us? Is it something that benefits a Hispanic family, it’s going to benefit a black family, it’s going to benefit the white non-Hispanic family, it’s good for everybody.

At this point, Latzman referred to non-partisan Latino organizations who were critical of Trump’s cabinet not having any Latinos on it.

Ferré: I would say that it’d be nice, and there’s no question that it would be nice to see Hispanics in the cabinet. But I don’t see that… I think we have an outstanding cabinet and there isn’t any one member of this cabinet that I would say, “We should take this person out and put in a Latino because a Latino is better.” Why? Because they are Hispanic? No. That’s not… I thought that we were past these days, where we were looking at a person’s merits and accomplishments that really enabled them to be selected to be a part of this group, and when we look at this cabinet and we look at… we do have diversity. We have the first Hindu Indian-American woman who is now UN Ambassador, Nikki Haley. And you look at Elaine Chow, who’s Asian-American. You look at these outstanding men and women who are representing our government and who are really going to shake up the status quo and make sure that government works for all Americans and not for just a sacred few. I think that is what is so much more meaningful than a person’s color, than a person’s ethnic or cultural background. It’s nice but you know what we really need are policies that are enacted, and meaningful change to move the country forward.

Latzman: I know there’s a lot of concern among Hispanics and especially after the immigration edicts going after the sanctuary cities and the construction of the wall, now this is a real thing, and how it might affect our border state, cities that may not officially offer refuge or do offer refuge to undocumented residents. The fears of families being split up. Can you, Helen, allay some of those for everyone that these things will or will not happen?

Ferré: Well, I can tell you a few things. First of all, border security and building the wall was part of President Trump’s campaign promise, one of his promises, and he’s fulfilling his promises. So we’re going to have a secure border. And I don’t know of any nation that doesn’t want to have control over their border. It’s every nation’s sovereign right to be able to do so. We have immigration laws that are going to be continued to be enforced. The Obama administration deported more than two million people in eight years and the laws that are on the books are the laws that are going to be enforced. So what we’re going to be doing is that we’re going to be providing more resources for Border Patrol so that they can actually enforce the laws, and we’re also going to be providing greater resources for those cities and towns that are on the border that sometimes suffer under the burden of having to help comply with the law without the proper resources to do so.

Ferré: Let me tell you something else about the sanctuary cities. So sanctuary cities sound nice, right? But we can’t pick and choose what federal laws we want to comply with or not. You can’t say, Phil, that one day, you know this year, you just don’t feel like paying your federal income tax. But guess what, Phil? I bet you the IRS is going to have a different opinion on that. And I bet you that there’s going to be a penalty and incarceration if you really get out of line for not complying with that federal law. So we all have laws and we are a country where the rule of law stands. If we don’t like the laws, then we work to change the laws, but we begin where it starts and we begin by securing our border and that’s step one. The ones who really have to fear are those who are criminals. Those are the main points. Those who are here undocumented in our country, they’ve always been subject to the risk of being found and deported…

Ferré: There’s going to be conversations… nothing’s that been enacted at this point in time with these first two executive orders affects anybody who is under DACA and there will be further executive orders that will be coming out in days to come that will address those other specific issues, and when they do, I’ll be happy to talk to you about it.

During another part of the longer 17-minute interview, Ferré added more details about Trump’s immigration policy, saying that the White House is looking forward with Congress to pushing bipartisan immigration reform, but right now, the federal government will focus on the first step of enforcement: “If you’ve committed a felony, if you’ve committed a violent crime, please know that the authorities will find you. You will be put in jail and then you will be deported.”

Born in Miami to Nicaraguan parents, Ferré is a former radio and media personality. Before joining the Trump White House, she was the RNC’s Director of Hispanic Communications.