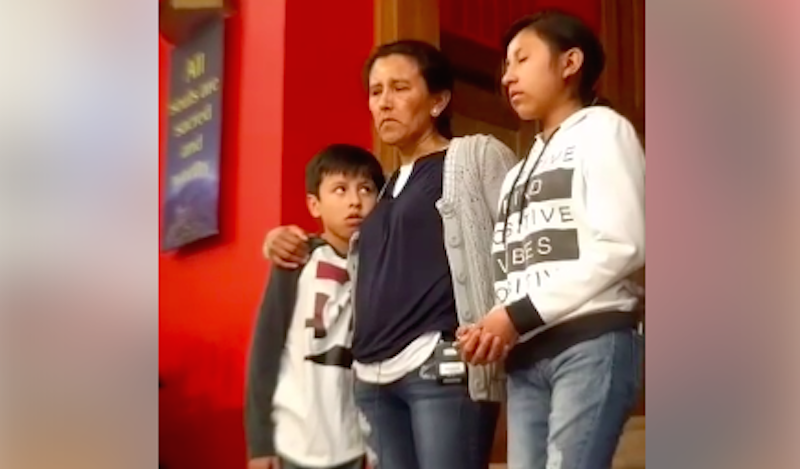 The day after news broke that a Deferred Action for Childhood Arrivals (DACA) recipient was arrested by U.S. Immigration and Customs Enforcement (ICE) in Seattle and a week after an Arizona mother was deported during her yearly check-in with ICE, a Colorado mother of four whose stay of removal was denied by an immigration judge took sanctuary inside a church on Wednesday.

Jeanette Vizguerra, who has four children and has been in a leader in the immigrant rights movement, decided to take sanctuary inside the First Unitarian Society of Denver. Vizguerra had a scheduled meeting with ICE, the first since her stay of removal had expired. Instead, she chose sanctuary over the ICE meeting.

Vizguerra’s case is yet another example of an immigration story that has quickly made national headlines in the last seven days. Last week, Guadalupe García de Rayos was detained by ICE in Phoenix, leading to community protests. García de Rayos was deported to Mexico on February 9. On Monday, Department of Homeland Security Secretary John F. Kelly said that more than 680 immigration arrests were made in a series of new ICE sweeps, raising speculation and concern from immigration advocates that these arrests were a direct result President Trump’s January 25 executive order on immigration enforcement. Finally, on Tuesday, DACA recipient Daniel Medina Ramirez was arrested by ICE, raising worries that more actions against DREAMers are on their way.

It is in this context that Vizguerra’s story has emerged. ICE has already responded to Vizguerra’s case, saying that she has two misdemeanor convictions and that a judge had ordered her out of the country.

In his DHS Monday statement, Secretary Kelly added that ICE’s enforcement actions “targeted public safety threats, such as convicted criminal aliens and gang members, as well as individuals who have violated our nation’s immigration laws, including those who illegally re-entered the country after being removed and immigration fugitives ordered removed by federal immigration judges.”

Before entering the Denver church, Vizguerra shared her reasons as to why she had decided to take sanctuary:

Once she was in the Denver church, another press conference was held.

Detailed information about Vizguerra’s story has already been published Wednesday by several national outlets, such as The New York Times and CNN.

An apt sign at the main entrance of the church where Jeanette Vizguerra has sought sanctuary. Her daughter snuck into this shot. pic.twitter.com/nwBIFEMSZB

Vizguerra’s supporters also announced a Wednesday afternoon DC rally at ICE headquarters in support of her and Ramírez Medina to deliver letters demanding a stay of removal for the both of them. The rally included women and allies from We Belong Together, American Friends Service Committee, Dreamers Mothers in Action, New Sanctuary Movement, United We Dream, as well as faith and labor leaders.

As for Ramírez Medina’s story, BuzzFeed News reported on Tuesday night that “Magistrate Judge James Donohue asked the Department of Homeland Security and other respondents to address by Thursday morning whether Ramirez was still being detained and if so, why, given that he was granted deferred action under DACA.”

Reuters, which first reported about Ramírez Medina’s arrest, said that the DACA recipient, “who has no criminal record according to court papers filed in his case, was taken into custody last week at his father’s home in Seattle by ICE officers.”

ICE said that Ramírez Medina admitted to being a gang member and a new statement from a DHS official is suggesting that the government will provide more evidence about this charge:

Here is what @DHSgov is now saying about detained #DACA recipient #DanielRamirezMedina pic.twitter.com/u8lNim4ufB

When news of Ramírez Medina’s arrest was made public on Tuesday night, one of his attorneys had already denied the gang affiliation allegation:

In case you are wondering #DanielRamirezMedina attorney has already claimed that his client was coerced by @ICEgov pic.twitter.com/3aAyEZ8BBu

A hearing on the Ramírez Medina case is slated for Friday. Given the Trump administration’s mixed signals about whether or not it would repeal President Obama’s DACA executive order, which granted two-year work permits and a temporary shield from deportation for anywhere between 750,000 and 800,000 DREAMers, the Friday hearing could be the first real legal test in a post-Obama world.

Nonetheless, reports of DACA and DACA-eligible recipients arrested and even deported during the Obama years did occur.

4 thoughts on “While a DREAMer Is Detained, Colorado Mother Publicly Takes Sanctuary to Fight Her Own Deportation”