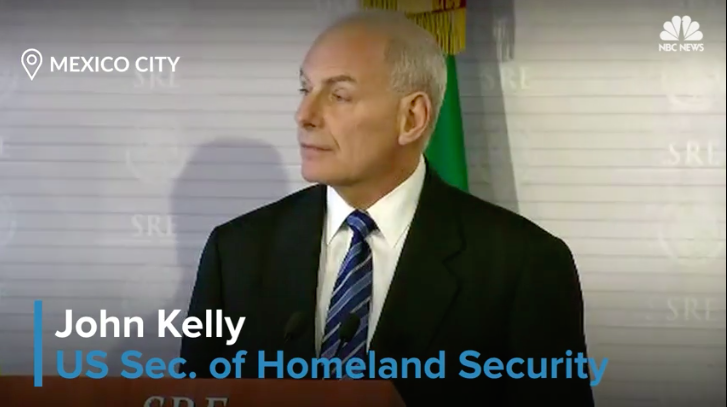 Hours after President Trump said at a Thursday morning White House listening session that the current wave of immigration enforcement actions is “a military operation,” Department of Homeland Security Secretary John Kelly insisted to reporters at a joint U.S.-Mexico conference in Mexico City that there will be “no use of military force in immigration operations.”

“And again, listen to this,” Kelly said near the end of the conference, where Secretary of State Rex Tillerson spoke, as well as Mexico Foreign Minister Luis Videgaray and Secretary of Interior Miguel Ángel Osorio Chong. “No, repeat, no use of military force in immigration operations. None. Yes, we’ll approach this operation systematically in an organized way, in a results-oriented way, in an operational way, in a human dignity way. This is the way great militaries do business. The United States, Mexico and many others. It’s also the way great legal organizations… police, the federal police… do business. So again, I repeat, there will be no use of military forces in immigration. At least half of you try to get that right because it continually comes up in the reporting.”

“You’ve seen what’s happening at the border. For the first time, we’re getting gang members out, we’re getting drug lords out.” Trump said. “We’re getting really bad dudes out of this country. And at rate that nobody’s ever seen before. And they’re the bad ones. And it’s a military operation because of what has been allowed to come into our country. When you see gang violence that you’ve read about like never before and all of the things, much of that is people that are here illegally. And they’re rough and they’re tough but they’re not tough like our people. So we’re getting them out.”

The latest immigration enforcement actions by the Trump administration have led to a growing sense of fear among immigrant communities, especially since many highly-publicized deportation cases of the last two weeks have not involved “gang members” or “drug lords.” Trump also did not address that these types of immigration actions have been ongoing for years. In the same Mexico City conference, however, Kelly also said that the United States is not conducting “mass deportations.”

“Now this is something I would really like you all to pay attention to because it is frequently misrepresented or misreported in the press,” Kelly said near the end of the joint conference. “Let me be very, very clear: there will be no, repeat, no mass deportations. Everything we do in DHS will be done legally and according to human rights and the legal justice system of the United States. All deportations will be according to our legal justice system, which is extensive and includes multiple appeals. The focus of deportations would be on the criminal element that have made it into the United States. All of this will be done as it always is, in close coordination with the government of Mexico.”

On Wednesday, the day before the Mexico joint conference, Kelly repeated a similar point on a trip to Guatemala. As The Washington Post reported: “The executive orders issued by President Donald Trump on border security and immigration enforcement will result in people trying to enter the U.S. illegally being caught at the border, where they will be ‘treated fairly and humanely and returned to their home countries,’ Kelly said. ‘There will be no mass roundups,’ he said. But those caught ‘will be returned to their country much quicker than has been the case for the last decade or so.'”

Kelly, Tillerson, Videgaray and Osorio Chong all made a point in the Mexico City joint conference to create a united front between U.S and Mexico to stop migration coming from Central America. They also acknowledged their differences (without any specific mention of a border wall), but made sure to highlight a spirit of collaboration and cooperation when it came to trade, security and immigration enforcement. The issues of human trafficking from the south and illegal gun sales from the north were also discussed.

“In our meetings, we jointly acknowledged that in a relationship filled with vibrant colors, two strong sovereign countries from time to time will have differences,” Tillerson said.

“In a moment where we have notorious differences, the best way to solve them is through dialogue,” Videgaray said.

“The President was using that as an adjective,” Spicer said. “It’s happening with precision. And in a manner in which it’s being done very, very clearly. I think we made it clear in the past and Secretary Kelly reiterated it, what kind of operation this was. But the President was clearly describing the manner in which this was being done. And so, just to be clear on his use of that phrase. And I think the way it’s being done by all accounts is being done with very much.. high degree of precision and in a flawless manner, in terms of making sure that the orders are carried out and it’s done in a streamlined and efficient manner.”