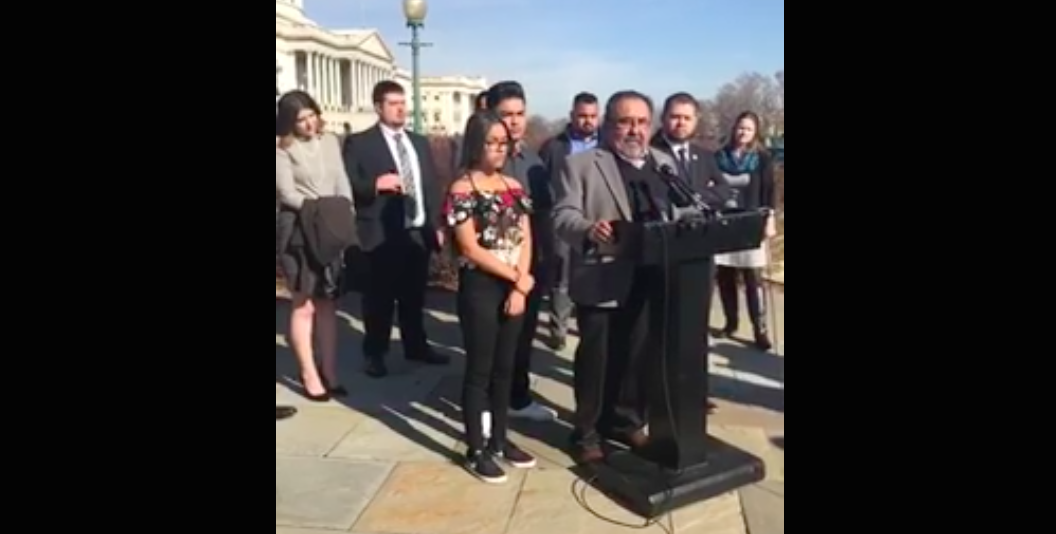 Tuesday morning in front of the U.S. Capitol, Rep. Raúl Grijalva (D-AZ) said that President Trump’s Tuesday night speech to Congress will focus on aggressive immigration enforcement and ignore the rest of the debate regarding the issue.

“There is no doubt in my mind, no doubt in my mind, that part of what will happen is that [President Trump] will spend some time beating his chest about what he’s doing on immigration and security,” Grijalva said. “People talk about the criminals, the bad guys, the bad dudes that he is now on a path to eliminate. He’ll talk about the wall. He’ll talk about those kind of sensationalist, untrue issues going on in this country relative to immigration and border security. And in doing so, gloss over the reality.”

Grijalva’s remarks came during a press conference with Rep. Ruben Gallego (D-AZ) and Ángel and Jacqueline García de Rayos, whose mother, Guadalupe García de Rayos, was deported by U.S. Customs and Immigration Enforcement (ICE) on February 9 after her yearly check-in at ICE’s central Phoenix offices. The two Arizona Democrats were calling on Trump to meet with victims of his immigration policies prior to his speech to Congress.

“This is the danger of Donald Trump’s executive orders on immigration policy,” Gallego said. “They are not going to ‘be looking for the bad hombres.’ Guadalupe is not a bad hombre. Guadalupe’s quite the opposite of that. The Guadalupes of this country are raising their children, are working good jobs trying to make the American Dream, and Donald Trump, in order to score political points with his base, and some rogue ICE agents themselves, are going to be going after the Guadalupes of the world who are only here to raise families. And instead of kicking them out of this country and separating families, we should do our best to keep them together and put her on a path to citizenship and their families on a path to citizenship.”

In 2009, García de Rayos was convicted for criminal impersonation, months after her place of work was raided by former Maricopa County Sheriff Joe Arpaio’s officers. Grijalva said that García de Rayos’ conviction was a “minor infraction” that did not reach “the level of criminality that Donald Trump talks about.”

“We’re talking about real people,” Grijalva said. “Real situations. Real breakup. Real anguish. Real fear in the immigrant community across this nation. And we need to do something that’s both compassionate and just. We need to talk about how we fix a broken immigration system. We need to talk about how we keep families together and not break them up. And those are what’s missing from the narrative that is going on from Donald Trump. The compassion and the humanity.”

“It’s really sad seeing what Trump is doing to these families,” Jacqueline said. “He’s separating us for no reason. We aren’t criminals. We just work. We do don’t anything bad. Our community now lives in fear, fear of being separated from their families. I met someone who recognized me from TV, and he told me that he looked up to me and that he’s really scared that his mom will be deported too. All my friends are constantly sharing things, posting, saying that they’re scared that they don’t want their moms taken away from them because our community is hard-working and we’re just trying to work to get on with our lives.”

“The Democratic and Republican leadership needs to stand up,” she added, “and stop ICE from separating families.”

Earlier this month, the Department of Homeland Security reported that more than 680 immigration arrests were made during a period of several days. It was the first highly-publicized series of arrests since Trump took office and issued new executive orders on immigration, although ICE has gone on record to explain that it has been conducting these types of arrests for years.

“First of all, crime unfortunately does happen, but let’s be clear: Guadalupe did not kill anybody. Guadalupe did not cause a major crime,” Gallego said. “Guadalupe was working hard just to have an opportunity for her kids to have part of the American Dream. And for every conversation about someone being a victim of somebody who’s undocumented in this country, let’s have the conversation of what some of the children of some of these undocumented have done for this country. The amount of men and women who have served their country even though their parents are undocumented. The amount of men and women that have started businesses and have contributed to this society. It’s very easy for someone like Donald Trump, who has a very simplistic worldview and an almost near nothing understanding of immigration and immigration policy, to only take a wide brush and paint this community as something as bad as he wants it to be, particularly just to scare people.”

Gallego later added that immigration enforcement push to arrest the “hardcore criminals” actually requires the undocumented community to cooperate and if the community is afraid of ICE, they will choose not to cooperate, and it will only force ICE to go after more undocumented people and their families who are not hiding from ICE.

“That’s the biggest danger here,” Gallego explained. “The narcotraffickers, the kidnappers, the rapists, the people that we want to get rid of, are going to be the ones that are going to be hiding, and ICE is going to be focusing on the easy targets. There is no security that gets increased by us targeting mothers and fathers. The security only gets worse not better.”

Both Gallego and Grijalva said that Trump’s orders are eliminating due process, which they say was a different from the Obama administration. Their comments also came before CNN reported that Trump “envisions compromise immigration legislation where those who aren’t serious or violent criminals could stay in the US legally, hold a job and pay taxes, without having to worry about being deported, a senior administration official told reporters Tuesday.”

You can watch the entire press conference below:

One thought on “Rep. Grijalva Predicts Trump Will ‘Spend Some Time Beating His Chest’ on Immigration in Speech”