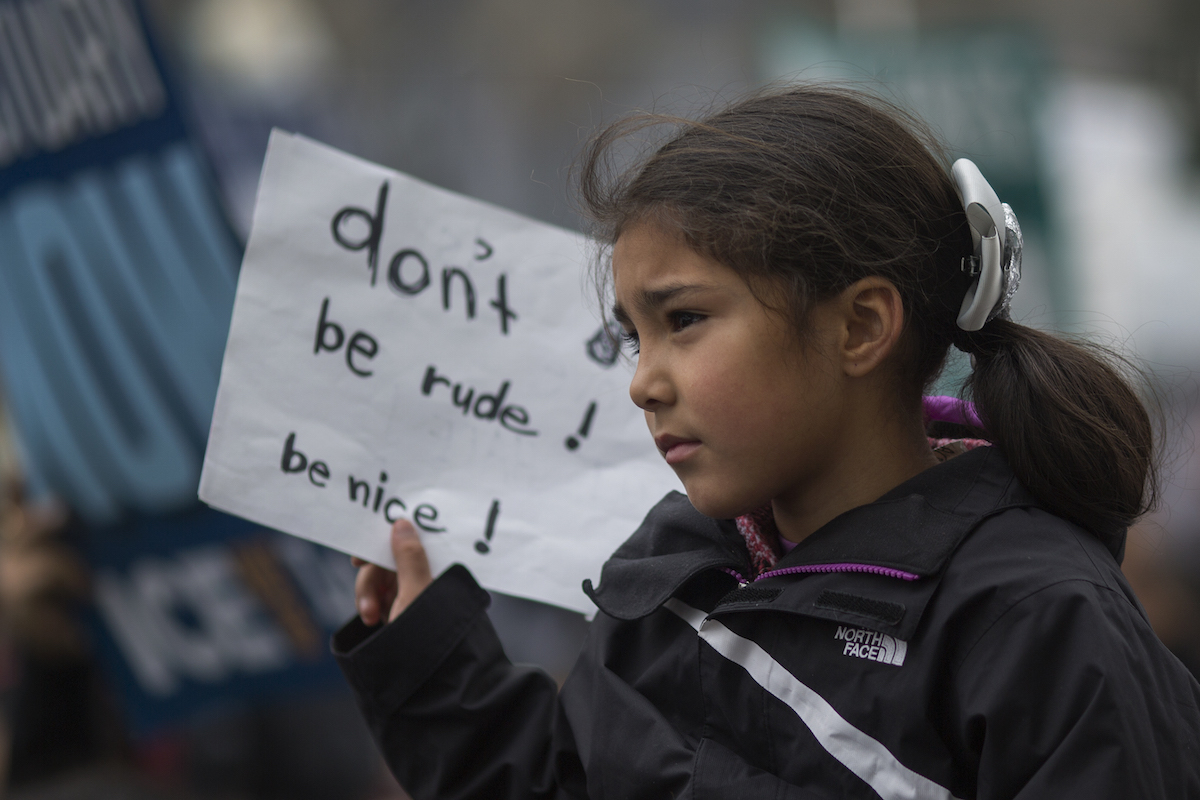 A girl carries a sign in the Immigrants Make America Great March to protest actions being taken by the Trump administration on February 18, 2017 in Los Angeles, California. (Photo by David McNew/Getty Images)

The tweet read “Why deport? Just kill them.” It came from a third-grade private school teacher in Scottsdale, Arizona. She also tweeted, “Or we can just put a bullet in their head immediately.”

The teacher resigned within days, but these types of open, hateful expressions and acts are becoming more and more prevalent in Donald Trump’s America and are taking fear, panic and terror that immigrant students and their families are already experiencing to heightened levels.

This teacher’s vitriolic language is a betrayal to American values and teachers’ overall mission to protect and nurture their students.

Since Trump’s presidential campaign and election, similar outbursts of hate speech, bullying, fear-mongering and violence are on the rise, targeting the vulnerable and marginalized. His words and policies are fomenting fear and validating hate in the land of the free.

On March 6, the president also announced a new executive order, impacting immigrants and refugees from predominantly Muslim countries. But let’s also look at what he is doing and saying about the immigrants already here.

In Trump’s recent joint address to Congress, he denigrated immigrants by saying, “We are removing gang members, drug dealers and criminals that threaten our communities and prey on our very innocent citizens.”

He also announced the creation of the office of VOICE (Victims of Immigration Crime Engagement), which will collect data and stories related to crimes committed by immigrants. This cynical, one-sided portrayal of the undocumented will only serve to demonize and tar them with the same bigoted brush. Some of those being swept up in the raids do not have a criminal record and have called the United States home for 10 to 20 years.

In Arizona, we are seeing the impact.

The first deportation case since Trump’s presidency took place in Arizona. Guadalupe García de Rayos, a married mother of two who came to the United States with her parents when she was 14, went to her eighth voluntary immigration check-in since her 2008 arrest and conviction for using a fake Social Security number. She had always been released, and went back home to her family until that night on February 8 when she was deported 24 hours after being detained. A family was torn apart. Two children were separated from their mother. “While it is politically expedient for this president and congressional Republicans to scapegoat immigrants, Muslims and refugees, the price is heavy for the families who are splintered and the livelihoods that are upended. Deporting a working mother of two does nothing to make our country safe, and it is the opposite of what makes America great,” Grijalva said.

The day after the third-grade teacher resigned, Homeland Secretary John F. Kelly issued two implementation memos on border security and enforcement of the immigration directives. They empower federal authorities to more aggressively detain and to accelerate the deportations of undocumented immigrants, even if they have not committed any crimes.

The sweeping guidelines also include the hiring of thousands of additional enforcement agents and enlist local law enforcement to help make arrests.

Sheriff Antonio Estrada of Arizona’s Santa Cruz County believes the new immigration policies are “terrorizing” border residents. In a recent article by The Arizona Daily Star, Estrada stated that the policies are spreading “fear and panic in people, and that’s not what this country is about.”

Throughout his campaign, Trump took a hard line on immigration, promising to build “a big, beautiful wall” along the border and to deport as many as 11 million undocumented immigrants.

Trump’s vision widens the pool of undocumented immigrants prioritized for deportation. It uses a broad definition of “criminal” and gives immigration officers the ability to make their own judgments on threats to public safety, regardless of whether the person has been convicted of a crime. This, like Arizona’s harsh and controversial SB-1070 law, can lead to racial profiling.

As of now, the new orders from Homeland Security do not affect the Deferred Action for Childhood Arrivals (DACA) program, an Obama administration policy that allows young, undocumented immigrants who were brought to the country as children to remain in the U.S. to study or work.  However, Trump’s new policies and threats to eliminate DACA have caused anxiety among DACA students, even when they were vetted through the application process.

A few DACA recipients, such as Daniela Vargas, who came to the U.S. from Argentina at age 7, have been detained (she was later released). There is also the case of 23-year-old Daniel Ramírez Medina, who case is still ongoing in Seattle, and recently, Latino USA spoke with Josué Romero, a 19-year-old DREAMer who spent three days in police and ICE custody.

To be fair, there have been a few cases of Trump supporters being bullied or harassed. For example, a Pennsylvania student and Trump supporter dropped out of school because she had been harassed when she revealed on Facebook that she was looking for a ride to a Trump event.  She felt overwhelmed by the hurtful online comments. She criticized the college for being in a bubble. She also said that the idea of “safe spaces was hypocritical because they were only safe for individuals who followed a certain ideology.”

But these incidents are fewer than the surge of racist, anti-immigrant, anti-Muslim, anti-Semitic and anti-transgender incidents in classrooms, college campuses and communities around the country.

Our American values are getting lost and are being perverted in the land of Trump, replaced by open xenophobia and scapegoating. Every American should look inside themselves and see their own humanity. Then, they should look to the immigrants and their families among us and understand they possess the same human soul and have equal inherent worth.

Dolores Durán-Cerda, Ph.D., is the Acting Provost of Pima Community College and is a Tucson Public Voices Fellow with The OpEd Project.