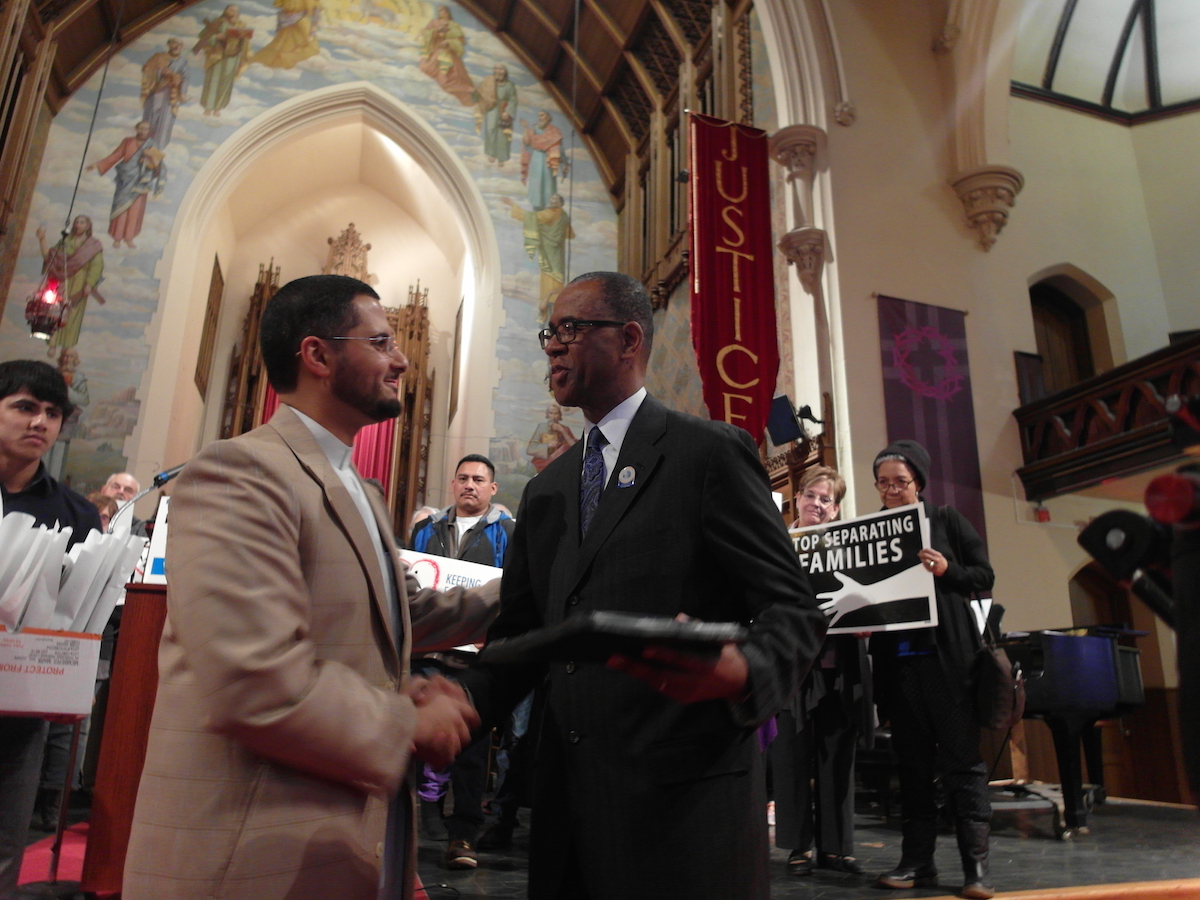 A coalition of faith-based leaders and immigrant rights activists announced Tuesday, March 14, 2017, at Central United Methodist Protestant Church in Detroit the formation of a sanctuary network for undocumented immigrants in Michigan. (Photo by Serena Maria Daniels)

DETROIT — The question over what to do should a family member be unexpectedly detained by Border Patrol agents has become a focal point for local organizers since the inauguration of Donald Trump.

So much so that this week, a coalition of faith-based leaders have opened their places of worship as part of a statewide sanctuary movement, reminiscent of the Underground Railroad, which ended at the Detroit-Canadian border at the height of American slavery.

As of now, nine churches and a synagogue throughout parts of the southeast and western parts of Michigan have volunteered to provide temporary shelter, food and legal assistance for families who have found themselves separated from loved ones who’ve been detained or deported. Others are considering joining in the effort, including at least one Islamic organization, and more have expressed interest in acting in solidarity by providing other services.

“During the period of slavery, so many children were separated from their parents,” said Rev. Dr. Louis Forsythe II, pastor at Pleasant Grove Baptist Church in the city’s east side, one of the congregations involved in the movement. “It’s what connects us today. How can we not get involved? We may worship differently but we have our humanity.”

The announcement this week is just the latest in a number of organizing efforts across the country that include “know your rights” workshops, trainings for non-immigration attorneys to assist with an influx of calls for service and a “Day Without Immigrants” boycott that resulted in the closures of hundreds of immigrant-owned businesses and people calling in sick for work last month.

By law, harboring an undocumented immigrant is considered unlawful, though U.S. Immigration and Customs Enforcement (ICE) officials are generally discouraged from conducting enforcement activities in “sensitive locations,” including churches, schools and medical facilities.

“The ICE sensitive locations policy, which remains in effect, provides that enforcement actions at sensitive locations should generally be avoided, and requires either prior approval from an appropriate supervisory official or exigent circumstances necessitating immediate action. DHS is committed to ensuring that people seeking to participate in activities or utilize services provided at any sensitive location are free to do so without fear or hesitation,” says a statement provided to Latino USA by ICE officials.

Among the participating places of worship is the historic Central United Methodist Protestant church in downtown Detroit, which has been housing a family seeking political asylum from an African nation.

“We’re used to having people come in and out and making the space work,” she said.

The family includes four children under the age of seven, a husband whose father was killed and a wife who was severely injured when she was thrown out of a window before the family was granted refuge in the United States.

When the family arrived in the U.S., they tried to flee to Canada, but were stopped at the border. Zundel did not disclose with Latino USA what country they originally fled from out of concern over whether authorities are trying to locate them.

That proximity to the Canadian border has long been a point of tension among the city’s undocumented immigrant community, which ranges from about 95,000 to more than 126,000 throughout Michigan—mostly Latinos from Mexico or Central American countries.

Detroit in particular, home of the Ambassador Bridge —the busiest border crossing between the U.S. and Canada— gives immigration officials amplified policing authority compared to interior states, making for unique cause for concern among the region’s Latino immigrant community.

Several years ago, ICE authorities in southwest Detroit were accused of wrongdoing for allegedly stopping parents suspected of immigration violations outside of schools when they were picking up their children. ICE wasn’t found of any wrongdoing, but it had to rework its sensitive locations policy to clarify where ICE agents are supposed to prioritize their enforcement efforts.

On the local level, Raquel Castaneda Lopez, the city’s first Latina councilmember, pushed to implement a municipal ID card program, geared toward undocumented immigrants, the homeless and other vulnerable populations that struggle to obtain acceptable forms of identification.

But the fear of getting stopped and detained during routine traffic stops remains a constant fear in southwest Detroit, where a majority of Latino immigrants reside.

Once President Trump was sworn in, unofficial “migra watch” pages on social media have reported alleged ICE and Border Patrol sightings throughout the community, with some documenting the sightings on their smart phones.

ICE officials maintain that their enforcement activities have not been increased, but that doesn’t stop the worry.

The anxiety can be felt among community organizers throughout the region, including those with Michigan United, a non-profit immigrant rights coalition based in Detroit, which sought the formation of the sanctuary movement.

During a typical week last year, the office might receive a couple of a calls a week from residents in need of assistance to help a loved one who was detained, said Adonis Flores, an organizer with Michigan United.

Since Trump took office on January 20, Flores said his office has been fielding two to three calls a day from families afraid of the possibility that they will be separated should a relative be apprehended.

Michigan United has held a series of “know your rights” workshops that go over a range of responses from what folks should disclose to law enforcement officials if they get pulled over to guiding parents at risk of deportation on how to authorize power of attorney to non-relatives for their children should they be unexpectedly detained.

For Flores, 28, who arrived with his family in Detroit from the Mexican state of Guanajuato when he was a child, the resistance to Trump’s hard stance on immigration is personal.

In 2012, Flores was among the first to be granted Deferred Action for Childhood Arrivals (DACA) under the Obama administration. With that legal presence, Flores has been able to get a driver’s license, work legally with Michigan United and continue pursuing his higher education at Wayne State University.

But Trump’s calls for a border wall and travel bans put DACA recipients like Flores on high alert, and with good cause. Just a few weeks ago, his brother was deported.

“I was very nervous that President Trump was going to cancel DACA immediately so I didn’t even enroll for school this semester,” Flores said.

While his outlook remains uncertain, Flores is encouraged by the solidarity that has grown as of late—particularly from the region’s sizeable Muslim community (southeast Michigan is home to one of the largest Arab and Muslim American populations in the country), which traditionally not have been known to mobilize with Latinos in the region.

“It’s creating a lot of solidarity between the Muslim communities and others,” Flores said. “I’m seeing a lot of Muslims standing next to their Latino brothers and sisters.”