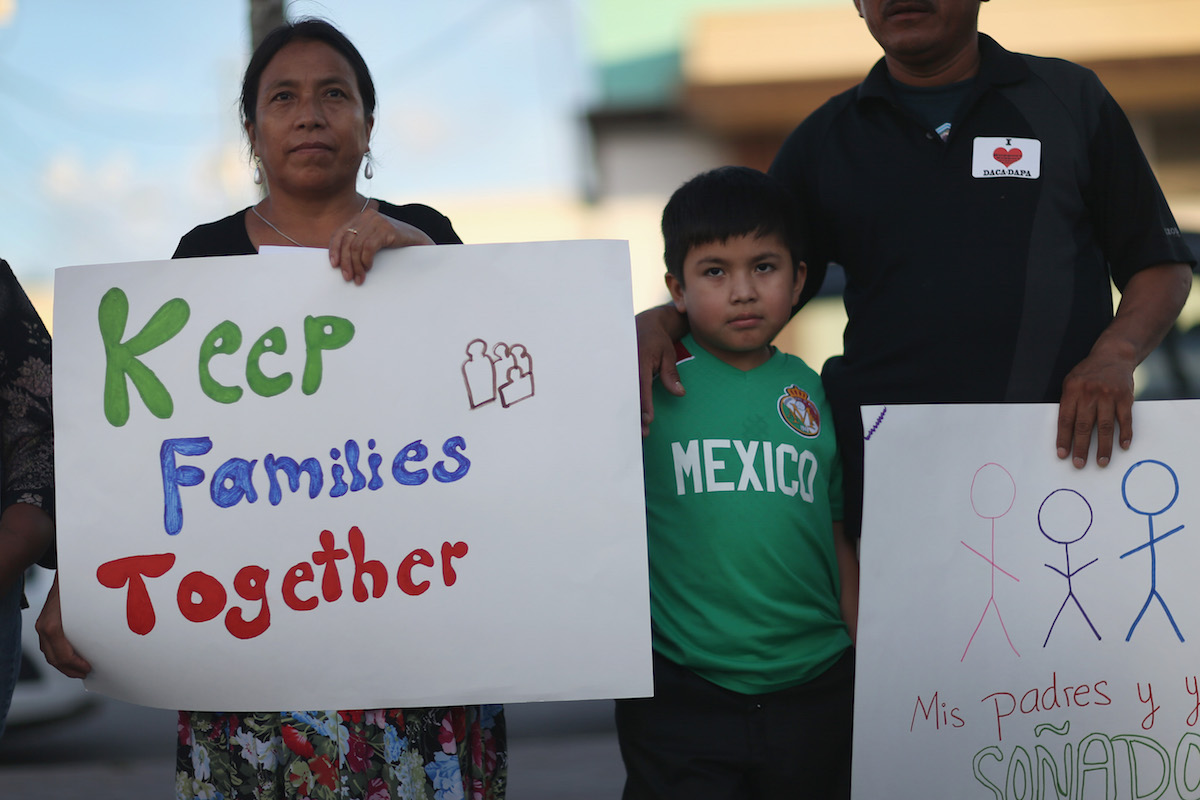 The president aims to shift the United States towards a merit-based system, which would continue the privileging of “good” and “deserving” immigrants as part of two competing frames.

Under the Trump administration, almost all undocumented immigrants are subject to deportation. A select few, namely the DREAMers, who benefited from President Obama’s Deferred Action for Early Childhood Arrivals  are exempt—at least for now.

If comprehensive immigration reform is to take place, we must consider a third approach activists have developed: emphasizing commonality across undocumented immigrant experiences.

The activism of a community-based organization in the greater Chicago area, Organized Communities Against Deportation,  is emblematic of this approach, complicating the binary of “good” and “bad” immigrants.

Staging a civil disobedience action by blocking buses leaving the Broadview Detention Center, protesters have demonstrated their commitment and determination to ensure the security of all undocumented people.

Yet for undocumented immigrants, taking part in an act of civil disobedience is extremely risky, bringing with it arrest and the potential for deportation.

Many DREAMers are now pursuing higher education degrees and have garnered bipartisan support for their inclusion in the United States. At the same time, other members of the undocumented immigrant community have not received such support.

Acknowledging the relative privilege they hold within the undocumented community, DREAMers have leveraged their position as those deemed worthy of inclusion to actively fight for the inclusion of others—their parents, peers and relatives.

DREAMers have brought attention to the differential treatment they experience in contrast to their parents and the internal divisions it presents for a united undocumented immigrant movement.

As part of the Our Parents were the Original Dreamers campaign, DREAMers focused attention on the role of parents and elders in ensuring their success and also having a dream of their own. This narrative simultaneously highlighted the hopes dreams of DREAMers, but also sought to paint their family members as having equally worthy aspirations.

This framing is contrary to the language in the U.S. Supreme Court decision, Plyler v. Doe, which named undocumented youth as having no choice in the decision to migrate and therefore, not guilty for their parents’ actions.

After identifying and transgressing the “good” and “bad” immigrant dichotomy, activists have advocated for an expansion of the rights and protections afforded to them under the DACA program.

These efforts resulted in President Obama’s announcement of Expanded DACA and Deferred Action for Parents of American Citizens (DAPA). Though litigation for the case is still ongoing, if enacted and not repealed by the Trump administration, this policy would increase the rights for undocumented parents of U.S. citizens. It demonstrates the far-reaching efforts of activists not only to symbolically state their objections to a problematic binary framing, but to enact measures to rectify the situation.

As the Trump administration continues to develop its efforts for a merit-based immigration system, it is clear that such a system would not only perpetuate the status quo, but also exacerbate divisions between “worthy” and “unworthy” immigrants.

A holistic approach to the treatment of immigrant communities underscores the promise that the United States holds for immigrants, refugees and others seeking to raise their families, work and attend school.

It is important for those of us who are citizens and who come from immigrant backgrounds and others with shared convictions, to contact our legislators and hold policymakers accountable during this pivotal moment in the future of U.S. immigration law and policy.

This is not about “good” vs. “bad” immigrant. This is about treating human beings with dignity, respect and fairness.

Kevin Escudero is a Presidential Diversity Postdoctoral Fellow in American Studies and Special Advisor to the Provost on Undocumented and DACA Students at Brown University. He received his Ph.D. from the University of California, Berkeley and M.S.L. from Yale Law School and is a fellow with the Public Voices Greenhouse through The OpEd Project.

One thought on “Immigration Reform 2.0: Going Beyond the ‘Good’ vs. ‘Bad’ Immigrant Framework (OPINION)”