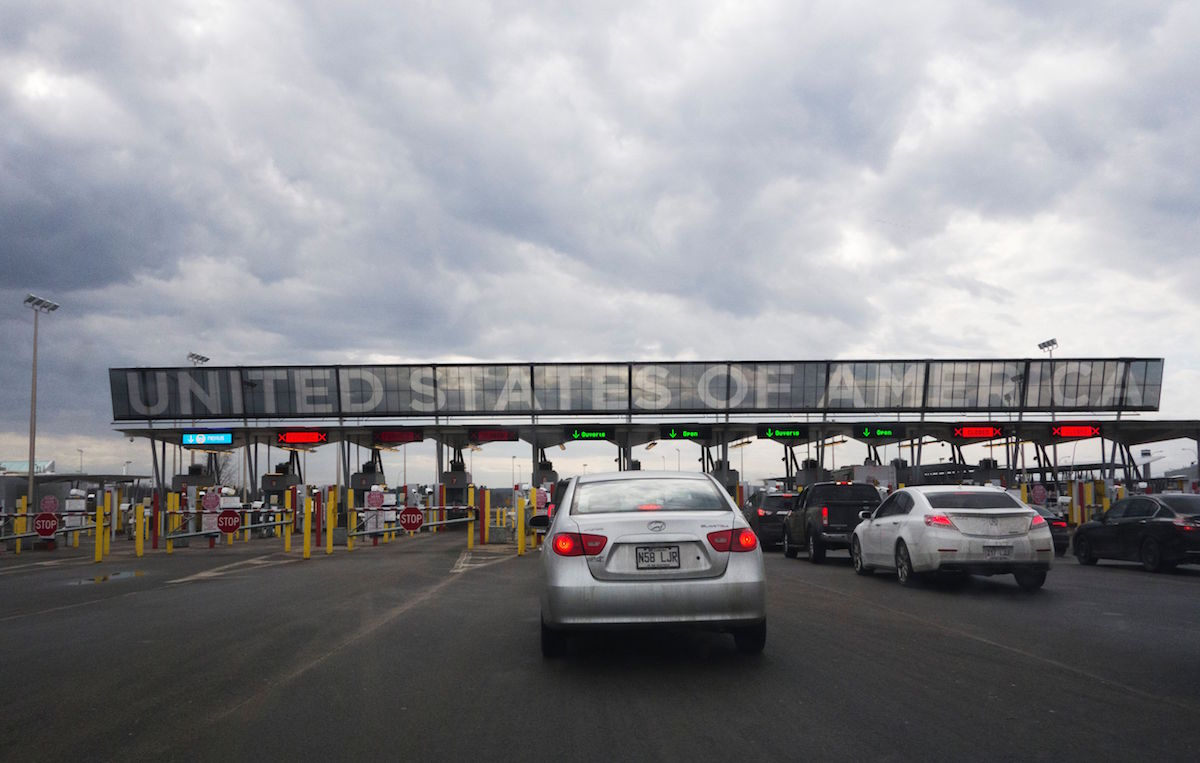 Cars line up to cross into the US at the US/Canada border on February 25, 2017, in Saint-Bernard-de-Lacolle, Quebec. (DON EMMERT/AFP/Getty Images)

EDITOR’S NOTE: The views expressed in this piece are solely those of the author and do not reflect the views of Latino USA.

Immigration is a word that has been on everybody’s lips as of late. The looming new policies are sending immigrants and green card holders into uncharted tumultuous territories and leaving the rest of the country apprehensive about the future.

When Donald Trump was announced as the new president, after what was deemed as the most dramatic presidential race of all time, the Canadian immigration website crashed. As millions sought solace in the neighbor to the north, the United States was left wrestling with the fate of millions of undocumented (and even documented) immigrants.

Canada is continuously pushing immigration boundaries by improving its system and making sure its attract the best and brightest from across the world. Even President Trump complemented Canada’s immigration system. The country’s Express Entry program, a direct pathway to quickly obtain permanent residency, further accentuates the contrast between both countries’ policies and views on immigration.

Could a system like this work in the United States? Is it really easier to immigrate to Canada than to the U.S.? Here is a breakdown of the ins-and-outs of immigration of both sides of the border.

Those who want to settle permanently in the United States must first obtain an immigrant visa. There are a few ways to get an immigrant visa. A foreign citizen can be sponsored by a relative who is either a U.S. citizen or lawful permanent resident, or a prospective employer, for example. In Canada, those with education and experience are required to pass a language aptitude test and show that they have enough money to support themselves, and their families, if they have one, for the first few months. This will lead to a permanent immigration visa, and both spouses have the right to work under the Canadian skilled immigration program. In the U.S., the H1-B visa for new skilled immigrant workers, limited at 85,000 annually, is a temporary visa, and it is not extendable to the spouse.

Contrary to Canada, in the United States, many perceive immigration as a threat to the American workforce. While Canada favors economic immigrants, U.S. Immigration is focused on family-based immigrants. In 2016, for example, the U.S. capped extended family-based green cards at 226,000 versus 140,300 for economic immigrants. The federal government’s approach to labor market policy has generally handled foreign labor demand through temporary visas and guest-worker programs, rather than with permanent residency. In fact getting a green card is a lengthy and expensive process. Talented immigrants, like engineering doctorates and physical sciences doctorates, are frequently “forced” to leave the United States and end up settling in Canada.

Canada has created a clear and easy immigration program for skilled workers. It is without a doubt much easier, and faster, for professionals to immigrate to Canada than to the United States.

Foreigners who want to live in Canada permanently are required to fill out a form that does not take more than 15 minutes to complete. This form includes information like the applicant’s age, resume, language skills, education—to find out what immigration programs they are eligible to apply for. While skilled workers in the U.S. have to wait anywhere from five to 11 years to get green cards, the waiting time in Canada averages at about six months.

The simplicity of the Canadian immigration infrastructure ranks applicants based on a points system and has no quotas or caps. The system consists of a possible 100 points, and only 67 are needed for an entry visa. Applicants can get points based on English and French language skills (28 possible points), education (25 points), experience (15 points), adaptability (10 points), age (12 points) and job offers (10 points). Highly-ranked applicants are pre-screened by the federal government and invited to apply for permanent residency. Those who do not obtain enough points can stay in the database for up to a year, making it easy for employers looking for foreign talent to find them, and safe in the knowledge that they can likely have them start working within six months.

This system has overturned the traditional, first-come-first-serve model that Canada and the United States have long followed. And while the U.S. focuses on keeping families together, Canada is pickier—opting for high-skilled immigration.

The United States and Canada have clear and diverse views regarding immigration. Canada has cultivated an immigrant-friendly reputation, championing newcomers as an asset to both the economy and multiculturalism. The U.S. is currently left struggling with the divisive nature and tone set by the new administration.

Immigrants want to come to the United States because they see opportunity and because they want to become a part of the fabric of a country that is free and diverse to its core. And while it’s hard to determine the impact of Canada’s new system, what is clear is that many are choosing Canada over the United States, where there are fewer hurdles to overcome and where the approach is much more welcoming to outsiders.