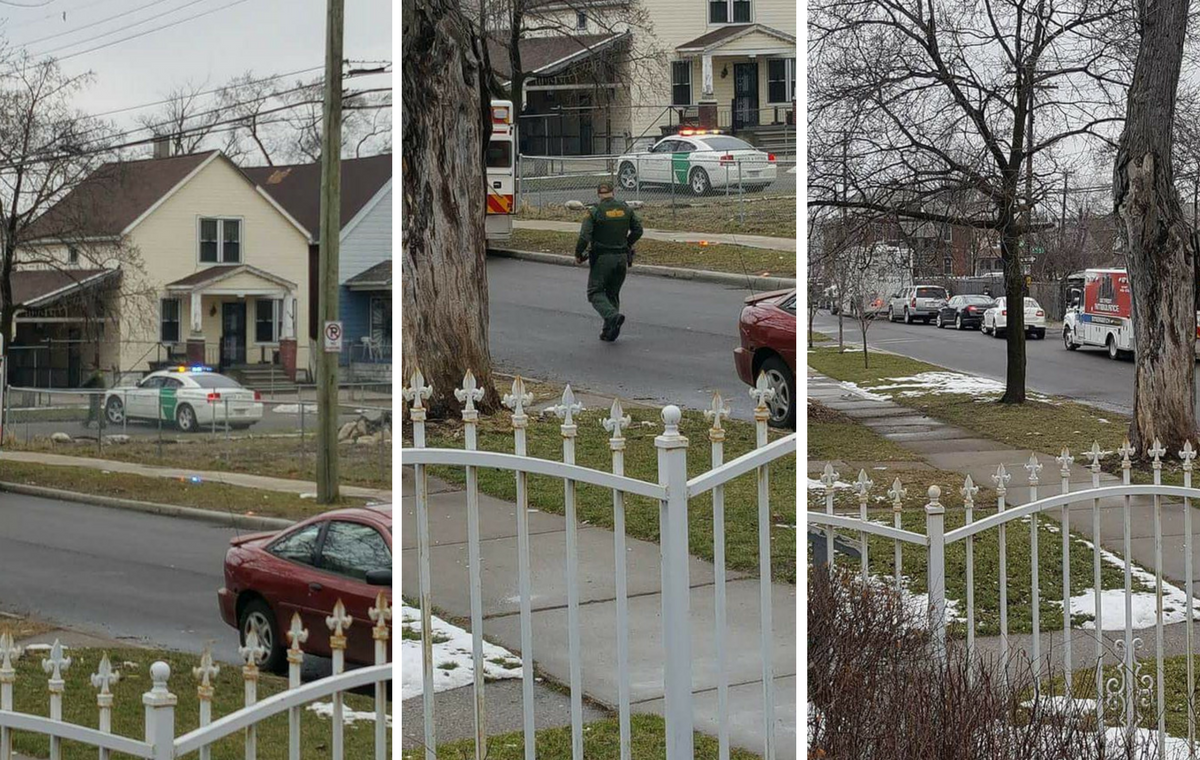 This is a series of three photos taken on Saturday March 18, 2017 from a residence, during a raid conducted by U.S. Immigration and Customs Enforcement in southwest Detroit (Photos by Daniela Marie Cuevas)

DETROIT — The scene in a neighborhood on this city’s southwest side over the weekend looked, according to Jose Franco, like the type of immigration sweep many in this predominantly Latino community had been fearing for months.

Swarms of nearly 150 local and federal agents had cordoned off several blocks. Residents warned each other not to speak to U.S. Immigration and Customs Enforcement (ICE) officials at the scene. Others stayed put in their homes, to avoid being rounded up in the chaos.

“My [Facebook] timeline was filled with friends and friends of friends posting photos and videos [of the raid]”, Franco said. “I drove over there to see what the hell was going on.”

The multi-jurisdiction operation turned out to be part of an investigation of an illegal cockfighting and gambling den in an abandoned building. But the operation nonetheless resulted in widespread immigration enforcement. In all, 50 people were taken into federal custody on suspicion of violating immigration law, a civil offense. Only one individual was arrested on criminal offenses, ICE officials have confirmed.

An ICE spokesman said the detainees have been taken to a facility in Youngstown, Ohio, and that their court proceedings will be held via video teleconference with a court in Kansas City, Missouri.

For immigration attorneys and others who advocate for the community, the case provided clues on what immigration policy will look like under the Trump administration.

“People are dealing with realities that are much harsher than they have been for a long time,” said Susan Reed, lead attorney for the Michigan Immigrant Rights Center.

Reed told Latino USA that that new reality includes several tactics as noted in a series of memos issued by the Department of Homeland Security earlier this year. In addition to increased ICE enforcement actions in U.S. cities along the Mexican border, all undocumented immigrants present during criminal or immigration raids —regardless of whether they are engaging in illegal activity— are subject to detention.

Examples of this enforcement strategy are already taking shape across the country.

Last month, 55 people were detained on immigration-related charges, following searches of eight Asian restaurants in Mississippi as part of a years-long criminal workplace investigation. In Santa Cruz, California, tensions flared among city officials who accused ICE of conducting a “secret immigration raid” during an investigation of an international gang that led to the detention of 11 undocumented immigrants from several locations (10 of those taken into custody were subsequently released).

The latest Michigan case also concerned advocates because the detainees were transported some five hours east of Detroit to Youngstown and will face deportation proceedings in a third city (Kansas City), leading to confusion of how or where to obtain proper legal counsel. Reed said such a practice was somewhat common during the George W. Bush administration, but not so more recently.

“It’s an incredible challenge for someone who walked down street from their home in Detroit… and to end up in another state, not knowing if they need an attorney in Ohio or Kansas City,” said Reed.

Michigan has among the toughest laws in the country for animal fighting, with penalties that can include prison time, hefty fines and seizure of any property that’s been found to be used in the illegal activity.

But unlike during the final years of the Obama administration, which focused primarily on deporting immigrants with violent criminal histories, Reed and others are reminding people that even just being in the presence of such illegal activity now can be cause for detention.

According to Michigan state representative Stephanie Chang (D), whose district encompasses parts of southwest Detroit, she and her staff became aware of Saturday’s incident when, like Franco, she began to hear of panic in the neighborhood that immigration officials were conducting the sort of sweep taken place in other parts of the country.

“I had no idea it was about cockfighting,” said Chang. “I heard that there were a bunch of Border Patrol agents. I was like, ‘what was going on?’”

Chang’s office has been encouraging constituents to know their rights: don’t offer information to immigration officials about national origin, don’t carry a foreign passport and do not provide a false name, which makes it harder for family members to locate loved ones through ICE’s online detainee locator.

Beyond that, Chang, herself a first-generation American, has been vocal about her opposition of policies that she said hurt children of immigrants.

“Families in southwest Detroit are literally afraid to go to church on Sundays because they fear that ICE will conduct a raid,” Chang said in a joint statement. “Immigrant serving organizations are already getting multiple calls each day about ICE arrests in our community. I am extremely concerned that this implementation memo will stoke even greater fear in young children who are afraid they will lose their immigrant parents to deportation. Rounding up undocumented immigrants who aren’t violent criminals on the street, and separating families, is simply inhumane. The families in my district deserve better than this chaotic mess, which is going to have a high cost to taxpayers. I am heartbroken for the residents who will feel the impact of this un-American policy, especially our youngest residents who will undoubtedly end up losing their parents.”

One thought on “Detroit Cockfighting Sting Results in Dozens of Immigration Detentions, Stirring Fears in Community”