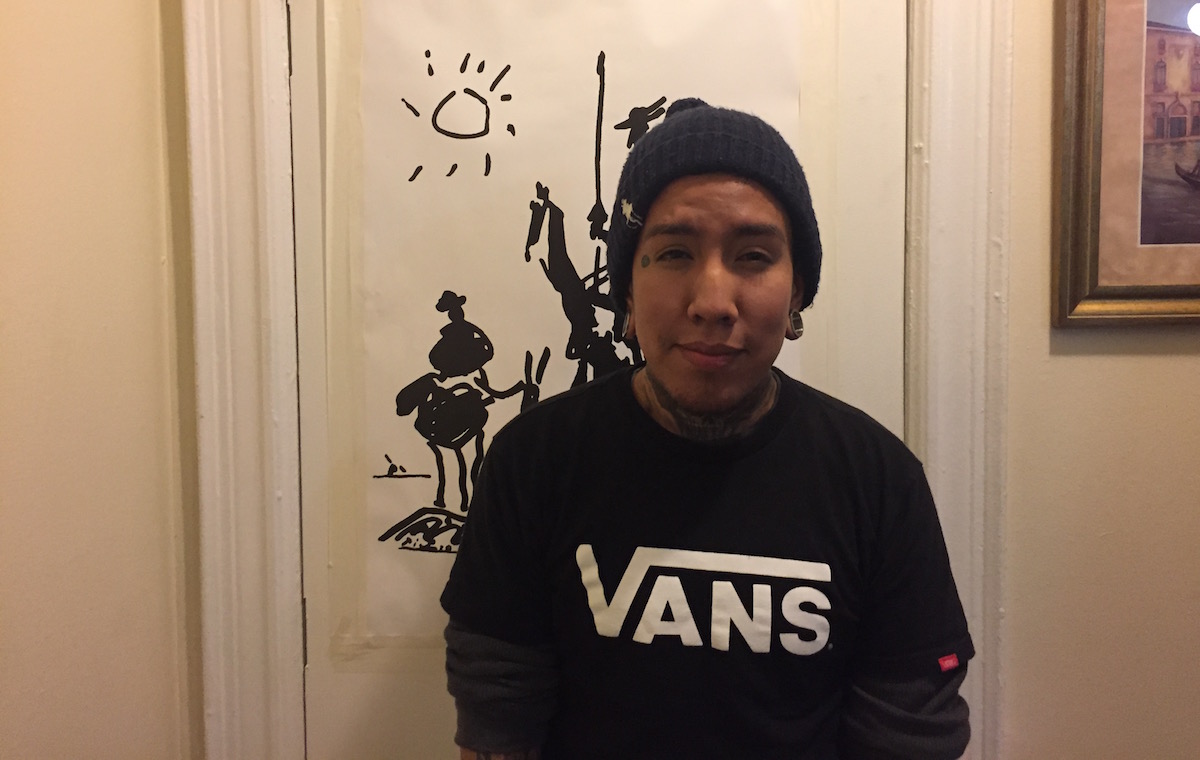 The first thing I noticed about J is his accent. (Because he’s undocumented, I am only using the first letter of his first name to protect his identity).

J is 27. When he was little, his family moved from Mexico to the United States. When he was 10, they landed in Queens, and he’s been a true New Yorker even since. He loves the 7 train. There’s a moment on his train ride when you can see the whole New York skyline and the Empire State Building, he says with a smile.

J lives with his dad in an apartment in Queens. They’re both pretty into decorating. “You can figure out who I am in like a matter of seconds,” J jokes as he shows me his room.

You get that he’s really into books and movies and going out for a beer with his friends, like most people his age. He’s covered the walls in art and posters, like that photo of the couple kissing in Times Square after WWII and a bunch of his own sketches.

J’s a tattoo artist. He has tattoos on his neck, down his arms, and that’s usually the first thing people notice about him.

“When you see somebody with tattoos, you automatically think he’s a criminal,” J jokes, then turns serious. “You know people probably see me as a criminal — even though I am not.”

In fact, J had never been in trouble with the law—no warnings, no tickets, no nothing. Until one night in 2014.

He was walking back to the tattoo parlor where he works in Queens after dropping a friend at home. When all of sudden, he was attacked.

“I got hit with a blunt object. I got knocked out, and I got robbed,” J remembers.

His head was bleeding. He says when he looked up, he thought he saw the person who attacked him walking down the block. So, J followed him. He remembers yelling at him that he wanted his stuff back.

“And then all of a sudden, I see a police car approaching. I thought they were there to help me out,” J explains.

They weren’t. J was arrested and charged with burglary, a felony.

This was J’s first interaction with the police, and it marked the start of a long journey through the criminal justice system.

The police confirmed J’s arrest, but they still haven’t given me a copy of his arrest record.

According to records from his lawyer, the man who J followed alleged that J tried to break into his apartment and threatened him. So the man ran outside to escape J and call the cops.

J was sent to Riker’s, a prison in New York City. His dad could have posted bail, but J’s lawyer advised him against it. The moment J was processed, he was flagged for U.S. Immigration and Customs Enforcement (ICE) because he’s undocumented. So if he had posted bail, he would have been immediately detained by ICE, regardless of whether he was guilty or not.

J was adamant that he was innocent. He refused to plea to anything. So he sat in prison waiting for a court date for almost a year.

“I still to this day, I have no words to describe how that made me feel,” J explains. “You know it’s like, that’s what I hate, being blamed for something you didn’t even do. Why, why, why, am I even spending time here? Why I am I being accused of this at all?”

After more than 11 months, J got a trial in front of a jury. Unlike most defendants, he decided to testify.

“I told the story that I am telling you, and they heard. They listened. They didn’t saw tattoos. They saw who I was,” J remembers.

The jury found him not guilty. J was free to go. He went home and back to work.

A few months later, he applied for DACA – a program started under Obama that grants temporary relief to undocumented people like J who were brought to the U.S. as minors.

Farhang works in a tiny, windowless office. A filing cabinet butts up against her desk chair.

She thought J had a good shot at DACA. She pulls out the stacks of papers they sent to the government: 12 letters of support, one from his father, his criminal defense attorney, his boss.

“We had an editor’s choice awards certificate for outstanding achievement in poetry. We had his high school diploma. We had college letters of acceptance from three different colleges,” Farhang leafs through the applications pages.

They submitted sterilization certificates from a local animal hospital to show that J takes good care of his pets. Over the years, he’s had a pit-bull, 2 cats, 4 birds.

“So what we submitted here was a thick packet to show them who he was as a person,” Farhang holds up a stack of paper an inch thick.

And what they got back?

“One short paragraph telling us that it would not be sufficient,” Farhang says.

Only about six percent of DACA applicants are rejected, about 94,000 people. There’s no way of knowing how many were denied because of run-ins with the law, but immigration attorney Genia Blaser, at the Immigrant Defense Project, says that these are people who are just more likely to interact with the police, whether they committed a crime or not.

“Particularly in low-income communities, communities where there are people of color, particularly in different Latino communities, there’s a lot of police presence,” Blaser says. “And so the police ticket and charge cases differently depending on who it is that they are talking to and what community they’re in.”

For example, minor offenses like being in a park after it closes, drinking on a stoop, or even yelling really loudly wouldn’t get you in trouble in some neighborhoods but could cause someone to be ticketed in places where there are more police.

“There is a lot more police presence in some of the outer boroughs in the Bronx, Brooklyn, and Queens,” Blaser explains.

No Hope for J?

Farhang, J’s lawyer, had hope for J’s application, but she says, once an undocumented person has a run-in with the law, no matter the result, it’s difficult to get relief from deportation.

J’s situation wasn’t good under President Obama, and now, under President Trump, it could get worse. Just five days into his presidency, Trump signed an executive order targeting undocumented immigrants. The order greatly expanded the list of reasons that a non-citizen could be deported to include immigrants who have been charged —but not convicted— of a crime.

Weeks later, the Department of Homeland Security released memos that could call for the deportation of anyone who is in the U.S. without authorization.

So Farhang worries that J’s old charge —that felony burglary charge will resurface. Plus, since J applied for DACA, immigration officials have his address and where he works.

“And we are obviously concerned, based on this new executive order, that his information will be used against him,” Farhang explains. “And he that might be considered a priority [for deportation] now.”

Farhang has told J what to do if ICE knocks on his door. They’ve made sure his dad has copies of all his documents and Farhang’s phone number. J even considered changing his address, but ultimately decided against it.

J reads the news every day —he buys two papers— one in English and one in Spanish.

J opens up El Diario, a Spanish-language newspaper. There are stories of possible raids, rumors of people being stopped, even on his train.

“Today I had to go to a Corona, and then I then had to take the 7 train, and then that’s when I was like, ‘Aww, man…’ I heard that they stopped the 7 train and started searching people. So I’m like…” J sighs.

J says he doesn’t believe all the rumors, but he is more aware. Like on the subway, instead of looking at his favorite skyline, he’s watching out for people who don’t fit, like big, bulky guys who could be undercover ICE agents.

But, he says, he’s determined to stay.

“I know I am part of this country in a way,” J explains. “I have so many memories, so many years, I have done so much. I am not going to give up. Doesn’t matter what they throw at me. I’m not giving up.”