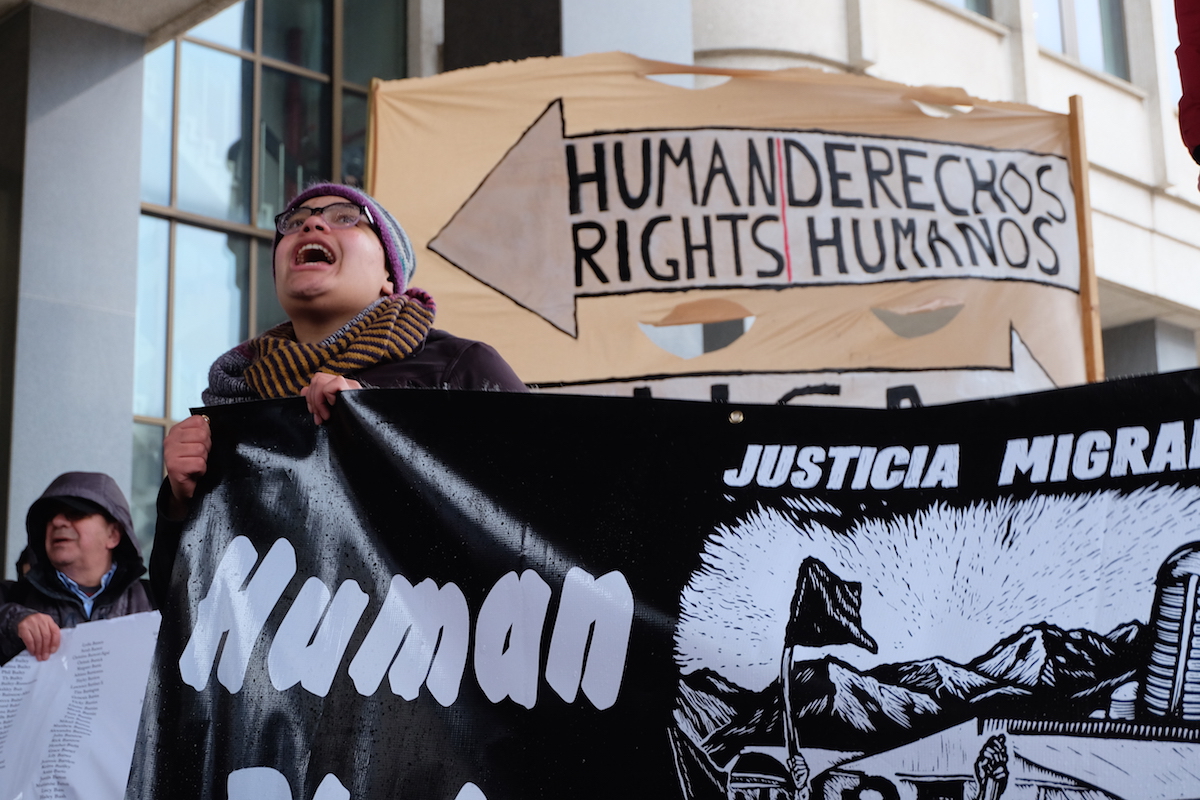 Protesters calling for the release of three detained Vermont immigrants in Boston on March 27, 2017 (Photo by Sarah Betancourt)

BOSTON – Four-year-old Solmarie clung to her mother Lymarie on the third floor of Boston’s immigration court while her great-grandmother Dolores rubbed her back in clockwise circles. She kept craning her neck to see if her father was on the screen, only visible to journalists on the left side of the room.

Chants from hundreds of activists on the street below drifted through the room to the point where Judge Paul Gagnon complained about the sound.

Everyone was waiting for six detained immigrants to be video conferenced in from Strafford County Jail in Dover, New Hampshire, for their bond hearings.

Two of the six were Zully Palacios, 23, and her boyfriend Enrique “Kike” Balcazar, 24, immigrant activists who were arrested in a car by undercover U.S. Immigration and Customs Enforcement (ICE) officers on March 17, outside of activist group Migrant Justice’s offices in Burlington, Vermont.

Lymarie Deida was waiting to hear the fate of her husband, dairy worker Cesar “Alex” Carrillo-Sanchez, 23, who had been arrested by ICE officers on March 15 while heading to a hearing at the Edward Costello Courthouse in Burlington for driving under the influence.

While talking to a crowd of over 100 protesters outside the Boston court on Monday, Deida said, “I’m here to say not one more. I’m here to say free Kike, free Zully, free Alex, because me and my daughter need him home.”

Deida and Carrillo have been married for a year. Solmarie is their daughter. Carrillo had worked on dairy farms since arriving in the United States from Mexico at the age of 16, and has no criminal record. He was being held on $21,000 bail, which Gagnon rejected in place of no bail, deciding that Carrillo’s arrest under the influence posed a credible threat to public safety.

Attorney Matt Cameron, who represents all three defendants, stressed that a Vermont court had already dismissed Carrillo’s drunken-driving charge, but that did not change Gagnon’s ruling that Carrillo would not be released.

What Are the Charges?

Migrant Justice organizers and Cameron claim that the arrests were an act of political retaliation. During an interview, Cameron told Latino USA that Balcazar had found out he was being “targeted” after organizer Miguel Alcudia was temporarily detained by ICE last fall. One guard allegedly told Alcudia that his “friend Enrique would be next.” After hearing about the alleged incident, Balcazar retained Cameron’s counsel.

Balcazar is an active community organizer in Vermont, and served on Vermont attorney general T.J. Donovan’s Immigrant Task Force, which was created in January as a response to President Trump’s immigration executive orders. Donovan could not be reached for comment.

ICE and DHS spokesman Shawn Neudauer told Latino USA in a statement, “ICE officers conduct targeted arrests of criminal aliens and other immigration violators. ICE does not target individuals based on political beliefs or activism.” He referred to an internal DHS memo dated February 20, 2017, which outlines the implementation of Trump’s executive orders and enforcement priorities.

According to ICE, Carrillo was arrested when being “charged locally with a DUI and self-admitting to federal authorities that he had unlawfully entered the U.S.” Palacios was arrested for overstaying her visa, and Balcazar for having an active immigration violation.

On March 17, four undercover ICE vehicles, including one with Massachusetts plates from Homeland Security Investigations, surrounded Palacios and Balcazar after they left work. Palacios was the target for arrest.

Neither Palacios or Balcazar have criminal records, a main factor for immigration arrests since the Obama administration, and the recent executive order from President Trump prioritizing violent offenders.

During the hearing, Cameron read segments a letters of support from Vermont senator Bernie Sanders for both Balcazar and Palacios, which had been sent to Chris Cronen, director of ICE’s Boston field office.

In the letters, Sanders said, “It is unclear why these two individuals would possibly be considered enforcement priorities, even under President Trump’s executive order on enhancing immigration enforcement.”

The Sanders letters were accompanied by 10,000 signatures of support, and at one point during the hearing, Cameron handed over to Gagnon a large packet of the letters with the signatures.

Gagnon acknowledged that the letters of support carried significant weight, but repeatedly referred DHS counsel Rusher’s allegations that Balcazar would not put the car in park when he and Palacios were surrounded by ICE agents, and kept asking why he was being arrested in a manner that was “combative and noncompliant,” and took “four attempts to retrieve fingerprints.” Rusher also said that Balcazar “felt entitled to be in the United States,” and that she wouldn’t trust the community supporters to not “aid and abet him,” if he was released on bail, in the argument that he posed a flight risk.

Cameron countered that right to an attorney and knowledge of charges were a legal right. Balcazar’s $14,000 bail was reduced to $2,500 by Gagnon with a warning that “this was no way to behave when law enforcement stops you.” Bail for Balcazar was posted by Migrant Justice on Tuesday morning.

Cameron stressed that his clients are being targeted for their prominent stature in the activist community of dairy farm workers.

“They’ve been the target for some time of surveillance and targeting, and we know they were the targets,” Cameron told the press on Monday afternoon. “There’s nothing about Enrique that would set him apart other than outspoken advocacy for his community.”

Migrant Justice (MJ) is an activist organization run by Vermont immigrants, many of which are dairy workers. It started in 2009 after dairy worker José Obeth Santiz Cruz was pulled into a mechanized gutter scraper and was strangled to death by his own clothing. Several Migrant Justice organizers have been detained by ICE in the past few months. Balcazar had organized in the campaign for Vermont driver’s privilege card, a program that allows individuals to acquire a driver’s license without having to prove residency.

Balcazar has been an activist involved with Migrant Justice for several years, and was an advocate for Vermont’s driver’s privilege card law, a policy implemented in 2014 that allows individuals to get a driver’s license without proving legal presence in the United States. The majority of dairy workers in the state are undocumented, and have sought a legal way to operate a vehicle over the years. The “bias-free” policing law bars state troopers from racial profiling and asking individuals about their immigration status, unless they are suspected of having been involved in criminal activity.

A total of five immigrants involved in dairy farm organizing for Migrant Justice have been detained in the past year. This includes Victor Diaz, detained last April, and Miguel Alcaldia, who were both released. Will Lambek, a spokesperson for the organization, told Latino USA, “It is a systematic attack on MJ.”

In Diaz’ detention, the charge sheet listed him as a “known associate of Migrant Justice.”

There were more questions than answers in the case of Zully Palacios.

“We are still trying to understand why she was a target of an [Homeland Security Investigation (HSI)],” said Cameron during his argument. Palacios has a valid Vermont driver’s license, but had overstayed her visa by eight months. He continued, “I’ve never heard of HSI chasing down a J-1 visa.”

According to DHS counsel, an anonymous “concerned citizen” had tipped them off to start an investigation, although it was not made clear what the investigation into Palacios is specifically.

Rusher said that Palacios had refused to get out of the car, and placed a phone that was recording the incident in her jacket pocket when immigration authorities apprehended her. Rusher said, “she wouldn’t give up her cell phone, and she was broadcasting live, putting officers in grevious harm.” Cameron countered that there is nothing illegal about recording police officers while being apprehended, and said he is a supporter of recording police. Gagnon chastised Palacios for recording during the stop, and decreased bail to $2500 with no conditions.

Cameron did not confirm that Palacios was broadcasting to Facebook, but defended her right to be able to do so. No further details were given about the investigation.

Famed environmentalist and Vermonter Bill McKibben also expressed his support of Palacios and Balcazar’s human rights at a recent Montpelier rally. He told Latino USA, “In rural areas particularly, we depend on our neighbors, and just the way we’d never drive by someone who’d run their car into a snowbank, so we should never drive by someone who’s been harassed by the powerful on account of their views.”

On the day of the Monday hearing, the National Education Association called for the release of Balcazar and Palacios, and announced it would present Migrant Justice with a civil rights award in June, the first time a recipient has been preemptively announced.

James Duff Lyall, executive director for the ACLU of Vermont, walked through the various bills and laws that have been implemented or are on the table in the Vermont Legislature in an interview with Latino USA.

Earlier this month, legislators passed a bill that would allow Vermont governor Phil Scott veto power over agreements between federal government immigration agencies, and local law enforcement. Although the bill passed with bipartisan support in early March, the ACLU thinks legislators could go further to require all police departments to adopt a “fair and impartial” policing policy, which would prohibit racial profiling by local police.

According to Lyall, this is already a problem in Vermont. He explained, “Absolutely, that problem has been rampant in Vermont. We settled a lawsuit over the summer with the Department of Motor Vehicles in which they conspired with authorities.” The Vermont Department of Motor Vehicles agreed to pay $40,000 to a Jordanian immigrant who was detained by ICE after applying for a driver’s privilege card in 2014. The DMV had opened a fraud investigation without cause and alerted immigration authorities.

Palacios and Balcazar will be released on Tuesday morning. Carrillo can appeal by April 26, and has a deportation hearing also set for April. Gagnon recommended he apply for a marriage visa to improve his chances of re-entering the United States.