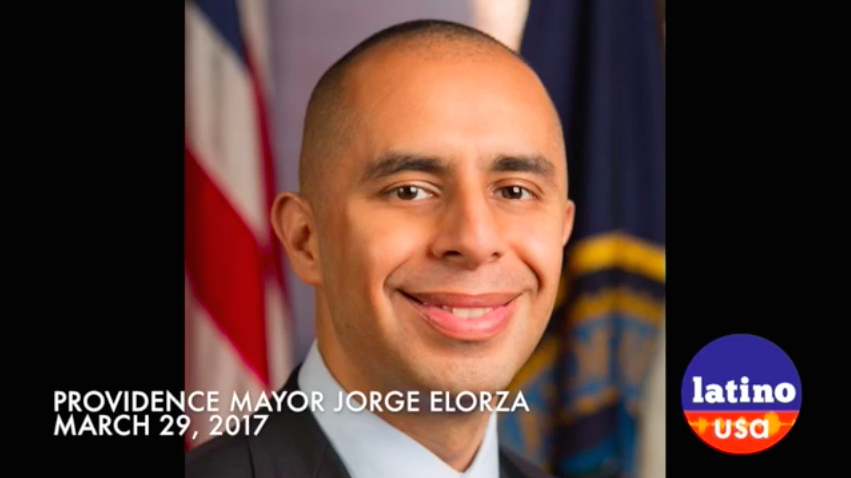 In a phone conversation with Latino USA on Wednesday, Providence mayor Jorge Elorza said that the Trump administration should express more clarity about recent immigration enforcement executive orders and Department of Homeland Security (DHS) memos, while also toning down rhetoric against immigrants.

Elorza’s remarks came right after he and other members of the U.S. Conference of Mayors (USCM) leadership team met in Washington, D.C. with DHS Secretary John Kelly. The Wednesday meeting was closed to the press, but the 40-year-old mayor of Rhode Island’s capital city shared his immediate thoughts in a 10-minute conversation.

“We found it very frustrating that we have not gotten clarity on exactly what a sanctuary city is or how [the Trump administration is] going to define it,” Elorza said. “And also on this detainer issue. We asked the Secretary to establish this line of communication so that we could get much more precision and details, because what’s happening right now is that you hear rhetoric coming from the White House and also from the Attorney General that’s all about crime and criminals.”

“And you hear from mayors. We’re talking a different language,” Elorza continued. “Of course, folks who are committing violent crimes, they should be arrested and if they’re undocumented, they should be deported. But as mayors, our main interest is making sure that our cities our safe. We have many undocumented immigrants who are living in our communities. They are living otherwise law-abiding lives. They’re simply going about their business and want nothing but what’s better for their families. So we want to release some anxiety and fear that they’re feeling as well. And so how can we have one conversation, so that we’re not talking past each other, because at the end of the day, we all have the same goal: that’s to keep our streets and our cities and our country safe. And along with that, we want to make sure that we’re focusing every resource that we have at every level in targeting the most violent criminals. Folks that should be off of the streets. So since we have the common goal and that common purpose, let’s make sure that we’re defining terms, we know where we stand and figure out how we can work together to accomplish that goal.”

When asked about Kelly’s reaction to what USCM shared, Elorza said that the DHS secretary was “very receptive to that message.”

“[Kelly’s] a military man. He is not a political person,” Elorza said. “He spent his entire life in the military and so he’s about… he’s mission-driven, he’s results-oriented. Not political. So what you hear from Attorney General [Jeff] Sessions —with an anti-immigrant agenda, the language and the message that he communicates— was very different than what we heard today from Secretary Kelly. This was much more measured and it was all focused on public safety. Frankly, there’s a lot of heated rhetoric and a lot of unnecessarily inflated rhetoric that we hear around immigration. We didn’t have any of this during [Wednesday’s] conversation. It was, how we do we focus most of our resources so that we can get the truly bad people, people committing violent crimes, off the streets and if they are undocumented, make sure that they’re deported as well, while at the same time, letting folks know that if you’re living your life, if you’re not committing any crimes, you’re simply working or studying, and providing for your family, that you are not a priority.”

“Every city in the country already complies with and cooperates with ICE and with other federal agencies when it comes to getting the most dangerous people off our streets,” Elorza added later in the conversation. “Let’s keep the focus on that.”

Elorza also said that if Sessions were to remove Department of Justice’s funds for those cities Sessions claims are not cooperating with the federal government, his city would challenge that.

“We’ve done a lot of research on this and we’ve spoken with a lot of attorneys,” Elorza said, “and they’ve all told us that it’s very unlikely that [DoJ] will be able to withhold funds, given the existing policies in virtually every city in the United States. So we feel that we stand on very strong legal grounds, and any attempt to withhold federal funds, based on our current policies, would be patently unconstitutional.”