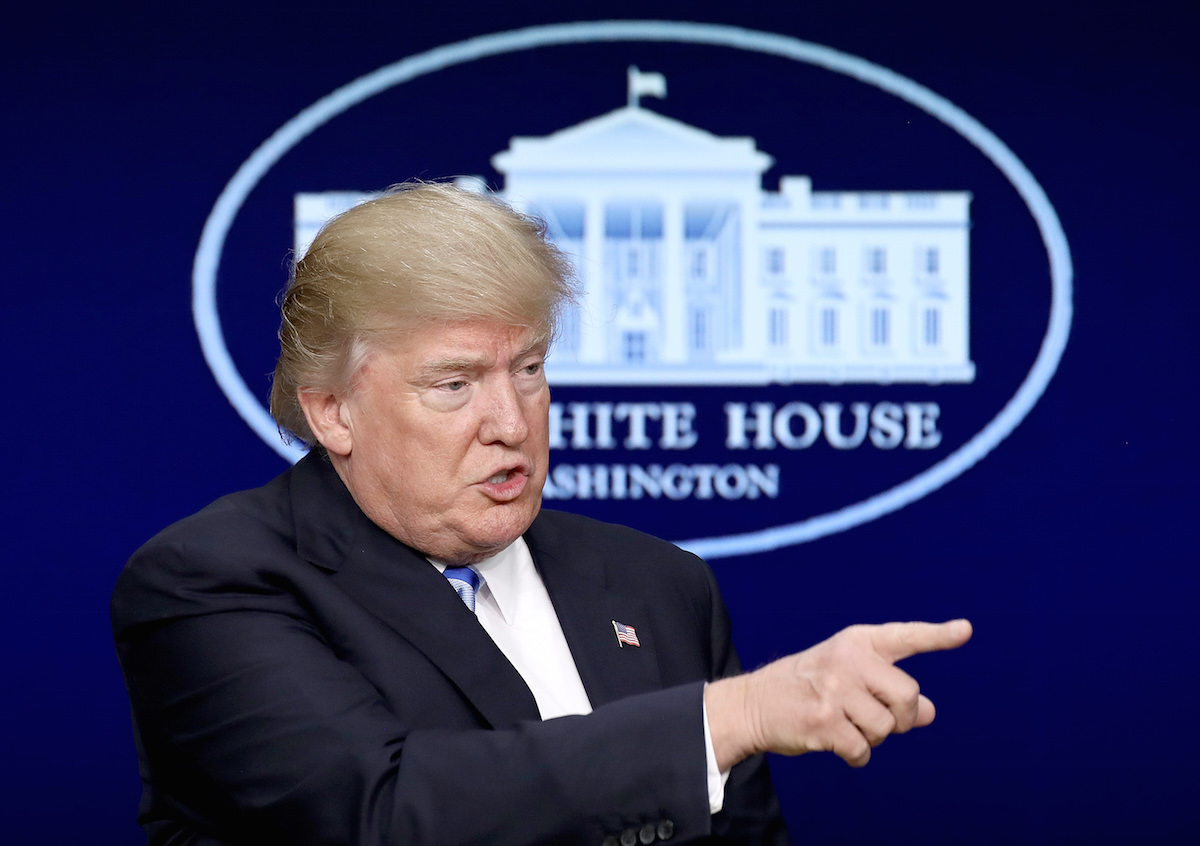 WASHINGTON, D.C. — After years of enjoying a cozy relationship with the Obama White House, a number of leading Latino organizations now find themselves looking in from the outside, with few opportunities for common ground with the new Trump administration. Yet for other organizations, the results of the 2o16 presidential election have sent their stock soaring after years of being ignored.

This Latino power shift breaks largely along ideological lines, but not exclusively. And while all of the organizations interviewed by Latino USA list themselves as non-partisan entities, they all have different philosophical differences about the role of government.

With a president who has already reversed himself on some key campaign promises (deporting DREAMers and repealing Obamacare without a replacement) and is calling for greater government involvement on trade, job creation and infrastructure spending, few things are certain about what the next few years will bring—meaning that virtually every national Latino group is eager for a seat at the negotiation table.

Still, after a contentious presidential election that started off with Trump suggesting that many Mexican immigrants are rapists, to questioning the integrity and credentials of the Mexican-American judge, to affirming his support to build a border wall along the U.S.-Mexico border and forcing Mexico to pay for the cost, not all of the Latino groups are quick to forgive and forget.

Rhetoric Is Still an Issue

Brent Wilkes, executive director of the League of United Latin American Citizens (LULAC), the country’s oldest Latino civil rights organization, wonders if President Trump will pivot and realize that campaign season is over.

“It’s hard to see where areas of agreement would occur between LULAC and the Trump administration. This President is still using rhetoric to attack immigrants,” Wilkes told Latino USA.

Eric Rodriguez, vice president for advocacy and legislation at the National Council of La Raza (NCLR), a powerful Latino civil rights organization with huge influence among many members of Congress, said that NCLR also wants to work with the Trump administration. When asked about the new political climate, Rodriguez spoke fondly of working closely with previous Republican administrations, noting President George W. Bush’s genuine interest in helping the Latino community, particularly on issues of home ownership and access to credit. But like Wilkes, Rodriguez thinks President Trump’s harsh anti-immigrant rhetoric may poison the well of cooperation.

“We have very serious concerns about the unleashing of ICE [U.S. Immigration and Customs Enforcement] on our community,” Rodriguez said. “It impacts Latinos regardless of immigration status, and certainly the economic stability of millions of American families. How can you take away a family’s bread winner and turn around and argue that you are improving economic opportunity for those families and communities you have upended?”

But for others, like Arturo Vargas, executive director for the National Association of Latino Elected Officials (NALEO), the first problem with the new White House is that his group is being shut out of the process.

“This administration has virtually no contact with the Latino community,” Vargas said. “We have reached out to them since day one and have invited the President and the Vice President to our events, but have received declinations.”

What the White House Says

“The administration has been meeting with Hispanic leaders in all areas of importance including healthcare, education, entrepreneurship and meaningful job creation,” Aguirre Ferré said. The Miami native and former Univision Radio host was previously part the Republican National Committee and is seen as a key liaison between the Latino community and the Trump White House.

Allen Gutierrez from The Latino Coalition, a group representing Hispanic business owners, says that this White House is already exceeding the level of engagement to the Latino community than previous administrations.

“I don’t ever recall President Obama or even President Bush meeting with Hispanic leaders during the transition period. The fact that [President-elect Trump] did this is very telling and encouraging,” Gutierrez said.

The Latino Coalition has already scored big in the early days of the Trump White House. Vice President Mike Pence and Linda McMahon, the Administrator of the Small Business Association recently spoke at their policy summit held in Washington, D.C.

NALEO’s Vargas did acknowledge attending the meeting with the Trump transition team and other leaders in the Latino community, but said that he has seen little to no engagement since then. Besides, “the President has an obligation to engage with the Latino population… Latinos are the second largest population group in the U.S. and any policy decision affects Latinos.”

On this, the Trump White House and Vargas agree, according to Aguirre Ferré.

“There isn’t an initiative the President has been working on that will not benefit Hispanic families,” she said.

It’s Not About Immigration?

According to the Pew Hispanic Center, Latinos recently ticked off their priorities for the new administration and Congress. Immigration was not the top issue. According to the poll, immigration was the fifth most important issue for those polled, well behind education, terrorism, job creation and healthcare. The findings confirm what Daniel Garza of the LIBRE Initiative and other center-right groups have been saying for years during the Obama administration: for many Hispanics, job creation is paramount. Garza had been especially critical of President Obama’s policies for relying too much on the federal government to grow the economy and fix health care. As a result, the LIBRE Initiative drew the ire of the Obama White House. Cecilia Muñoz, a key aide to former President Obama penned a harsh op-ed deriding the LIBRE Initiative for employing scare tactics to discourage Latinos from signing up for the Affordable Care Act.

“They trained their rhetorical guns at us,” Garza said.

Not surprisingly, Garza is encouraged from what he is seeing from the Trump White House and said that the economy is improving.

“Stocks are up because of his pro-business agenda,” Garza noted.

However, Garza said that there is certainly room for improvement, and that he would like to see the White House embrace the free market even more.

In addition, Javier Palomarez, president and CEO of the United States Hispanic Chamber of Commerce (USHCC), joined Trump’s Diversity Coalition, even after he was one of Trump’s harshest critics during the campaign, a topic he addressed in a recent segment with Latino USA.

Another question remains: can all of these different Latino organizations, despite their ideological differences, work together for the community? Maybe. When asked, all the groups said that they were open to working with other Latino organizations, but there are few issues (namely, immigration reform) that seem to unite them.

But at a time when conventional political norms are being turned upside down, few don’t want to rule anything out. Recently, heads turned when a number of outlets reported that among the business owners bidding to build a wall along the U.S.-Mexico border included Hispanic-owned businesses.

“We think building a border wall would be a huge waste of government money and would do everything in our power to block it,” Wilkes said. “But if this goes through, then yes, we absolutely want to see Hispanics get a piece of that business.”

Therein may describe the conundrum that represents the Trump White House for many Latino organizations.