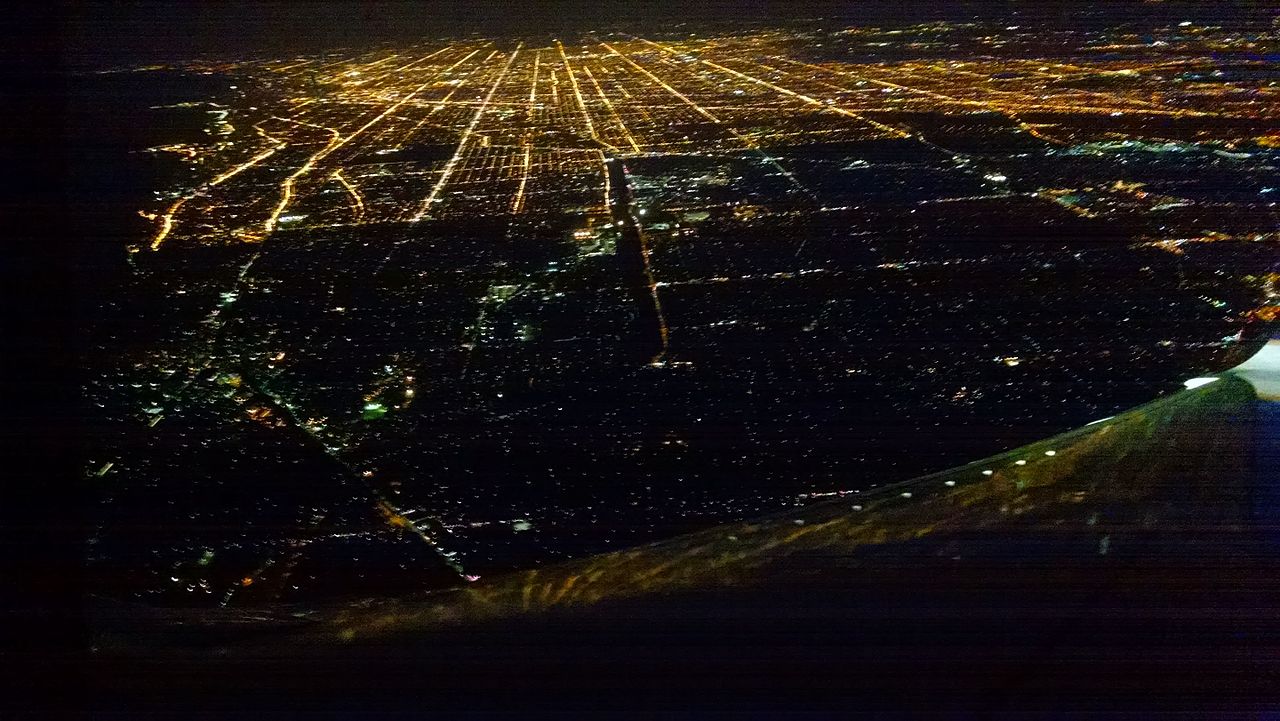 An aerial view of the Chicago area at night in August 2015, viewed from an airplane. (Photo by Ndshankar/Wikimedia Commons)

CHICAGO — For “Benjamin,” a pseudonym for a 16-year-old Latino boy (whose family shared their story on the condition they remain anonymous), the question if his parents are unexpectedly deported is a moral one:  “For the longest time, I’ve put my family first. But now, if my parents leave, do I go with them or leave them alone?”

As the youngest and only legal resident in the family, Benjamin is a natural-born U.S citizen. He does not know —or want to know— the struggle his parents faced near Mexico City in the early 90s.  He knows the opportunities here will not be found there.  So if one day the Trump administration’s policies force his parents to leave, he wonders, “Do I have nothing but have family or have something but no family?”

Benjamin’s father, 47, and his mother 45, arrived separately to the U.S. more than 20 years ago.  They tell their stories in Spanish.  Both crossed illegally. His father crossed hills at night.  A year and a half later, his mother crossed with 8-year-old and 1-year-old sons.  The only thing she told her children about the crossing was, “Don’t talk too much, and stay close to me.”

After they crossed the border and reached the expressway, she and her boys —along with five other people— squished into a Camaro until they arrived in Phoenix.  Then they traveled to Los Angeles. After a couple of days, they flew to Chicago to meet up with Benjamin’s father.

When they arrived in Chicago at the airport in 1997, Benjamin’s mother recalls feeling a great sense of tranquility.  She remembers that, “landing here meant we made it, that we were out of danger. The worst had passed.”

At the same time, she recognizes, they left everything behind.

Until Trump’s presidency, a significant fear for Benjamin’s parents was raising boys on Chicago’s Southwest side, where violence is a common element.  Their two older sons, now 28 and 21 and both Deferred Action for Childhood Arrivals (DACA) recipients, graduated from high school and went on to obtain management positions in retail stores.  Benjamin’s father and mother said they kept a close eye on them.  When their oldest son bought a car and when it was vandalized —spray painted, windows smashed, tires flattened— they decided to move.

Today, they live, like many other immigrant families do now, in a quieter, safer neighborhood near Midway Airport. But ever since Trump’s win, they cannot stop thinking about the “what ifs.”

Benjamin’s father, who makes up part of the 8 million unauthorized workers in the U.S., and works in the food service industry, says, “We’re in fear. Scared to go out, scared to be at work, scared that something is going to happen there. And I start to think: if something like that happens, [if we’re deported], what’s going to happen to my children?”

In a recent Latino USA interview, president and CEO of the United States Hispanic Chamber of Commerce Javier Palomarez spoke about the thousands of immigrants who left Alabama because of “draconian laws.”  Two years later, Palomarez explains, the state reported an $11 billion loss in taxes and revenue.  “Listen—if you’re not buying the emotional side, the civil rights side, maybe you’ll buy the economic argument,” Palomarez emphasizes.

But despite the calls to focus more on the economic benefits that immigrants bring to the country, distressing reports like the one of a father who was picked up by U.S. Immigration and Customs Enforcement (ICE) outside his daughter’s school still weigh on Benjamin’s father.

The Pew Research Center found that 66% of undocumented immigrants have lived in the U.S. for at least a decade.  A deportation is not a simple relocation. In 2016, the U.S. deported over 240,000 immigrants.

For undocumented immigrants, confronting their fear and confronting ICE could be disastrous. Benjamin’s mother, who also works in food service, recalls that “with Obama, we had the hope that there would be some change that would benefit all of us.  When this President [Trump] came to power, hope turned into fear because we don’t know what’s going to happen.  We’re in limbo. We’re stuck between fear and worry.”

When Benjamin’s parents confronted planning for the worst-case scenario and looked into setting up a power of attorney for their 16-year-old son, the U.S. citizen, they couldn’t. Their oldest son, as an undocumented immigrant and DACA recipient, does not qualify. They don’t know a U.S. citizen they could ask to take on this legal responsibility. So Benjamin’s parents continue to think: What do we do?

One solution Benjamin’s father would like to see the U.S. implement is something similar to DACA for adult undocumented immigrants, similar to the Deferred Action for Parents of Americans and Lawful Permanent Residents (DAPA) program President Obama tried to implement through executive action. Benjamin’s father says it could be “something temporary that could be renewed. With time, they could see each person’s behavior. This is an opportunity they could give us, with a path to residency.”

Chicago Mayor Rahm Emanuel recently proposed a municipal ID card program for undocumented immigrants living in this city that describes itself as a “sanctuary city.”

While the municipal ID could not be used for legal residency, it would be a way for undocumented immigrants to “identify themselves while filing police reports, buying city stickers, paying bills or seeking to gain access to public buildings,” according to a Chicago Tribune article.

But supporters worry this information could be passed along to ICE, even though city officials said the ordinance prevents the city from collecting or keeping personal information. While the city says it has $1 million in the budget to launch the program, too many unanswered question make the municipal ID program questionable.

For now, while his family remains intact in Chicago as they have for 20 years despite their mixed status, Benjamin continues to earn high grades, take AP classes, read a lot, and apply for competitive programs to guide him to and through college. He’ll be the first in his family to attend. He wants to study political science. Or neuroscience.

“And in Mexico,” she adds with agitation in her voice, “you live day to day. You eat or you buy clothes.  You never think about having a car because you either put gas in the car or you put food on the table.”

But the tension in her voice fades when she talks about living in Chicago.

“I go downtown. I love Chicago,” she shares.  “It’s my country. It’s my city. This country has given me so much that my own country did not give me.”