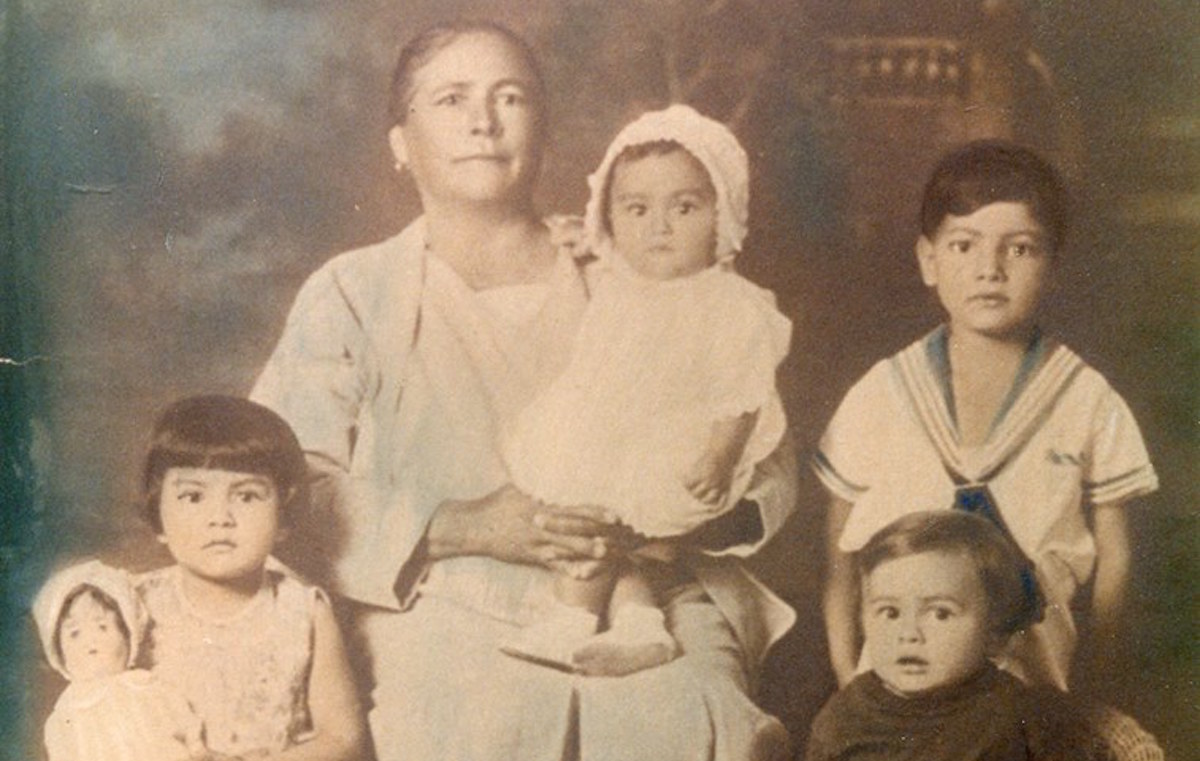 Guadalupe Guerra and her U.S.-born children (left to right) Teresa Ruelas, Francisco "Frank" Guerra, Jose "Joe" Guerra and Rafael "Ralph" Guerra circa 1930s. The Guerra family was forced to move to Mexico in 1932 during the Mexican Repatriation of the 1930s. (Courtesy of Abraham Ruelas)

The Mexican Repatriation of the 1930s may have happened almost 90 years ago, but many family members of survivors of this era are still feeling and processing the repercussions. In Latino USA‘s “Out of Sight” episode, 91-year-old Emilia Casteñeda shared the story of her and her family being “repatriated” to Mexico in 1935. She was eight years old, U.S.-born and grew up in Boyle Heights, a neighborhood in Los Angeles. As she recalled, her Mexican father couldn’t find a job during the Great Depression.

“There were no jobs for him, just for the Americans,” she said.

After nine years, and with her birth certificate finally in hand, Castañeda found her way back home to Los Angeles, where she settled down and started a family. Castañeda was one of the thousands of children of the Great Depression who was swept up in a process called “The Mexican Repatriation,” where about one million Mexican and Mexican Americans —including U.S. citizens— were forced to leave the U.S. and go to Mexico.

When Castañeda’s daughter, Christine Valenciana, reached college age, she began to do research for an oral history class where she read some information that sounded eerily familiar.

“I happened to run into a little paragraph there about something that happened in the 1930s,” Valenciana told Latino USA. “That there were train loads of Mexican that went to Mexico from the United States and I thought, wait a minute, this kind of sounds like my mother’s family and her cousins. That’s when I first started making the connection.”

She decided to interview her mother and other family members. “I was surprised and I was very saddened to begin understanding what actually happened,” Valenciana said. “What counts more than anything is how people’s lives were affected. Not just those particular people, but subsequent generations. I mean I really didn’t get to know my grandfather as a result of this.”

Abraham Ruelas also never had the chance to meet his grandfather. In 1932, his mother Teresa and her brothers, all born in Fresno, California, were sent to Mexico along with their parents. There, her father was murdered, and Teresa and her siblings helped their family raise money by selling candies. Teresa made her way back to the U.S. at a later age with the help of her great-uncle, who lived in California at the time.

Ruelas didn’t learn of his mother’s history until two summers ago, at his uncle’s funeral.

“It was shared as part of his eulogy. It was a big shock to me,” Ruelas said. “I had never heard that part of the story and it kind of helped things make sense because I could never figure out why it was that my mom was born in Fresno and she was in Mexico and came back to the United States.”

“My dad raised us to be very patriotic Americans,” Ruelas added. “I think I’m still processing it. That my mom and her family were kicked out of the United States even though they were American-born and that the United States would do that to their own.”

Ruelas is currently an eighth grade history teacher. He teaches about “The Mexican Repatriation” and shares his own family history with his students: “I bring in my own [sources] and it’s part of my own personal history so I share it that way as well. So that it’s not just this historical event, but it’s a historical event that had an impact on my own family and the kids can relate to that.”

Because this piece of history is not currently included in classroom textbooks, a majority of descendants of survivors find out their family members were involved in this deportation process through research of their own. Journalist Araceli Cruz found out while looking for information for an article she was writing about a year ago.

In an article Cruz wrote for Vivala, she revealed that her grandmother Evelia was born in Guadalupe, a small city in Northern California, and she was about three years old when her family “had to ‘voluntarily’ relocated to Mexico with the money that the government gave them.”

Unlike the other U.S.-born children who were forced to move to Mexico, Evelia never returned to her birth country.

“All this information was under my nose and I just never discovered it,” Cruz said.

Her grandmother passed away when Cruz was young, and she regrets never having the chance to ask questions about the dark past in her grandmother’s life. But since Cruz’s career path led her to discovering her own family history, she turned her own shock into something productive.

“My family from Mexico and my cousins from California who didn’t know the whole story are grateful and they’re also in shock,” Cruz said. “I feel like I’m doing my family a service for investigating myself. I feel like their parents probably knew but they just didn’t talk about it.”