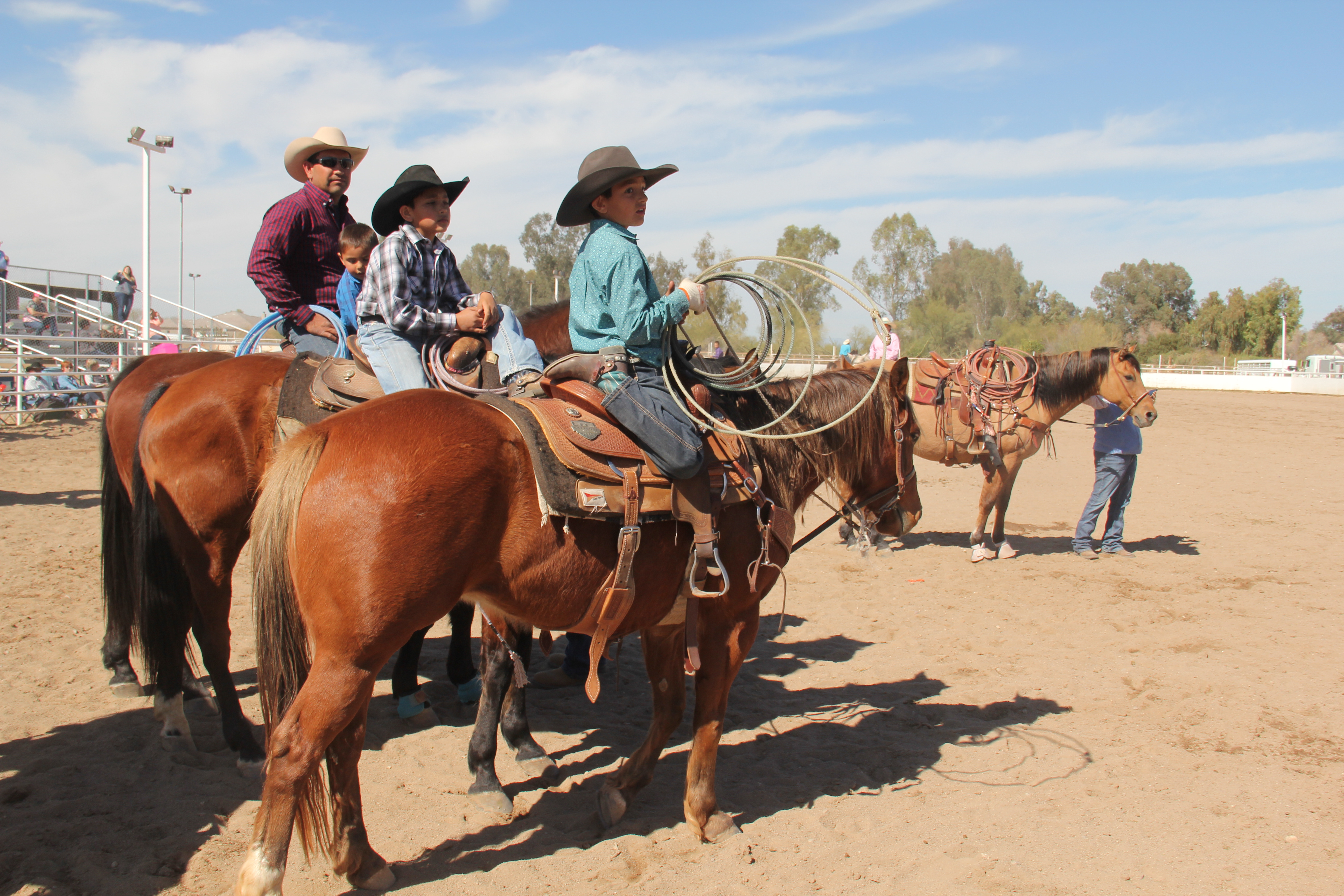 Latino USA recently went to Arizona for this week’s special episode on the rodeo.

We wanted to go where the Mexican tradition of rodeo meets the all-American cowboy. Producers Fernanda Echávarri, Marlon Bishop and Antonia Cereijido and Latino USA host Maria Hinojosa spent the weekend getting to know the cowboys of Southern Arizona.

Michael Calmelat grew up roping and dreamt of joining the professional world of rodeo. Today, he does team roping events with his son Little Michael, and together they are moving up the ranks.“My dream for him is to give him the opportunity that I never had, so he will have the opportunity to do it early in life,” Michael said. Unlike most kids, Little Michael and his 15-year-old sister Angelina come home from school and practice on roping on their horses instead of watching TV or playing video games. Michael and Rachel often practice with their kids. This family spends a lot of time together, outdoors. Rodeo is a central part of their lives, so much so Rachel calls it their religion.

Pedro Egurrola, 21, is one of the most talented young Mexican-American team ropers in Arizona. He grew up ranching —as did his father, and all his relatives as far back as they can remember— and started competing in rodeos when he was 10. Today, he lives in Casa Grande, Arizona, where he competes on a college rodeo team and works on horses. “I’ll probably be doing rodeo forever,” he said. Pictured here is Pockets shortly after his first ever time competing in the Tucson Rodeo. Pedro has 10 horses, and Pockets, he says, is the favorite.

Arturo Romano, Jr. comes to all of his father Arturo Romano, Sr.’s jackpot competitions. A jackpot is basically the pick up version of rodeo where people show up to compete in the hopes of winning money. The younger Romano was practicing his lasso skills at the side of the arena, and his advice for those first learning to lasso is “if they ever laugh at you, just still follow your dreams.”

Billy Padilla, 64, is from Patagonia, Arizona. He’s third generation Mexican-American and owns a 300-head cattle ranch close to the border. “What I’ve noticed growing up is that the Mexican cowboy came over to the American side and a lot of the American ranch owners picked up a lot of the habits and traditions of the Mexican cowboy,” Billy said. His son Damian Padilla is one of the best ropers in Southern Arizona and often competes in team roping with his son Damian, aka Little Damian. Just like the Calmelat family, the Padillas have rodeo at the center of their lives. At this junior rodeo, proud grandpa Billy watched his grandson Little Damian rope and get second place. First place in team roping went to Little Damian’s buddy, Little Michael Calmelat.