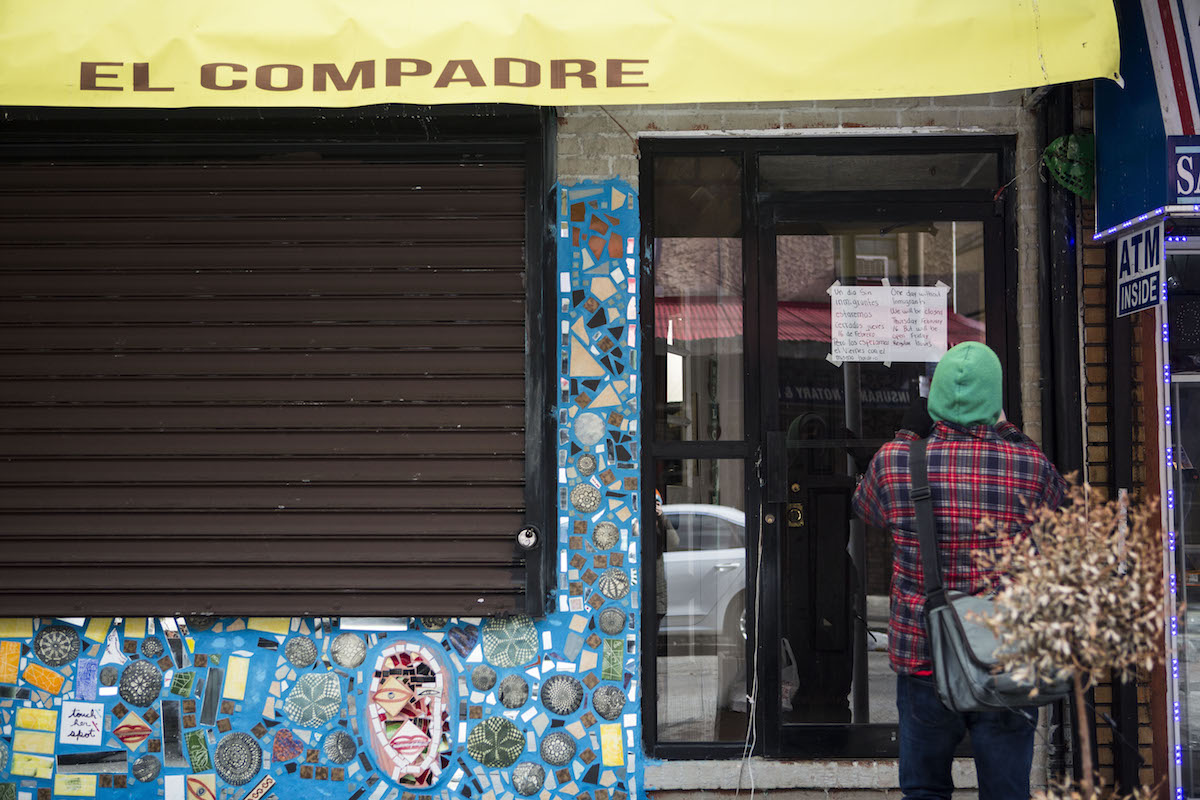 In February, this Latino-owned business closed in Philadelphia during the "Day Without Immigrants" campaign. (Jessica Kourkounis/Getty Images)

Before Donald Trump became President of the United States, sentiment towards Trump among Latino small business owners was best described as a “like-hate” relationship.

Based on a December 2016 survey among Latino small business owners conducted by my company, Camino Financial, 51% of respondents stated they were not satisfied with an incoming Trump administration. However, 44% of the respondents believed Trump would be good for their business, 22% thought nothing would change, while the remaining 34% believed their business would be worse off.

Nonetheless, now that Trump has been in office for close to three months now, sentiment among Latino small business owners is shifting, not towards hate, but even worse: fear and uncertainty. Fear and uncertainty are terrible for business. For example, our company engages with over 1,000 small businesses owners per month interested in getting a small business loan. Our customers are mostly first- and second-generation Latino immigrants. Yet immediately following the announcement of the President’s immigration executive orders at the end of January, our company experienced a 35% drop in business loan applications in February.

Upon experiencing this, I spoke to a fellow executive who manages an auto financing company focused on first-generation Latino consumers. His portfolio is close to $100 million in loans. The executive mentioned his company’s volume took a pitfall in February as well, its first monthly volume drop in the last three years.

These trends suggest two very important insights. First, Latinos (first- and second-generation) are drawing back on taking risks with capital. Second, businesses relying on the purchasing power of Latinos could experience potentially dramatic declines in financial performance if the sense of fear and uncertainty continues. President Trump is putting at stake $668 million in gross sales and $1.4 trillion in untapped potential by neglecting Latino small businesses. How is that for the U.S. economy growing at the rate of inflation?

Has Immigration Clouded the Issue?

Based on the same survey mentioned above, immigration ranked third place (next to education), among the most important issues to Latino small business owners. The top two issues were health care and employment.

As it relates to immigration, the President’s strong stance put at risk an estimated 500,000 to 800,000 small business owners who operate without legal residential status. Many of these business owners are employer firms who pay taxes but are at risk of deportation, as seen in the example of Roberto Beristain. Moreover, there are millions of additional firms, including pro-Trump farm businesses, who rely on the labor of undocumented residents taking jobs that would otherwise be difficult to fulfill.

Health care reform does not show promise to Latino small businesses. This is an area where potential cost savings would exist for businesses with over 50 employees, who under the Affordable Care Act (“ACA” or “Obamacare”) are mandated to offer health care to their employees. On the other hand, the great majority of Latino small business owners do not employ over 50 people. The repeal of ACA would result in the loss of tax benefits available to businesses with less than 50 employees that offer health care to motivate and retain employees. As within the Republican Party, there is a divergence in views on what is the “right” approach to tackle health care among Latinos. One would have hoped our business-minded President would have bridged the divide between diverging views to arrive to a deal. All we got was a lousy bust.

Trump still has a chance to tackle two remaining issues that matter to us: education and employment. In addition, Latino small business owners generally support tax reform that will put extra dollars in their pockets and give them the firepower to build their businesses and create more jobs.

Flawless execution will be required for Trump to regain lost ground among Latinos. Otherwise, he will lose the small segment of right-leaning Latinos who likely voted for him last November (~20% of Latinos voted for Trump) and even worse, place our economy at risk.

But there is good news: Latinos are not waiting for Trump to change.

This community is already bringing change to Trump by building coalitions that protect their interests and fuel the U.S. economy. At Camino, we recently launched a “No Business Left Behind” campaign to raise $10 million to lend to ALL businesses despite their residential status. To date, we have placed $1 million in microloans, mostly to first-generation Latino immigrants. We also collaborated with a group of Latino small business coaches to create a Facebook group called Latino Small Business Owners, which grew to over 1,000 members in its first three weeks (and growing). In addition, organizations such as the Latino Coalition, the Latino Donor Collaborative, and the Latino Entrepreneurship Initiative at Stanford are raising awareness of the impact of Latino small businesses. These efforts reflect a rise in political and business activism among Latinos. Activism meant to hold our elected leaders accountable and grow our economy.

Latinos are paying attention to what’s happening on Capitol Hill. It’s time Trump reciprocate and give us the attention we deserve.