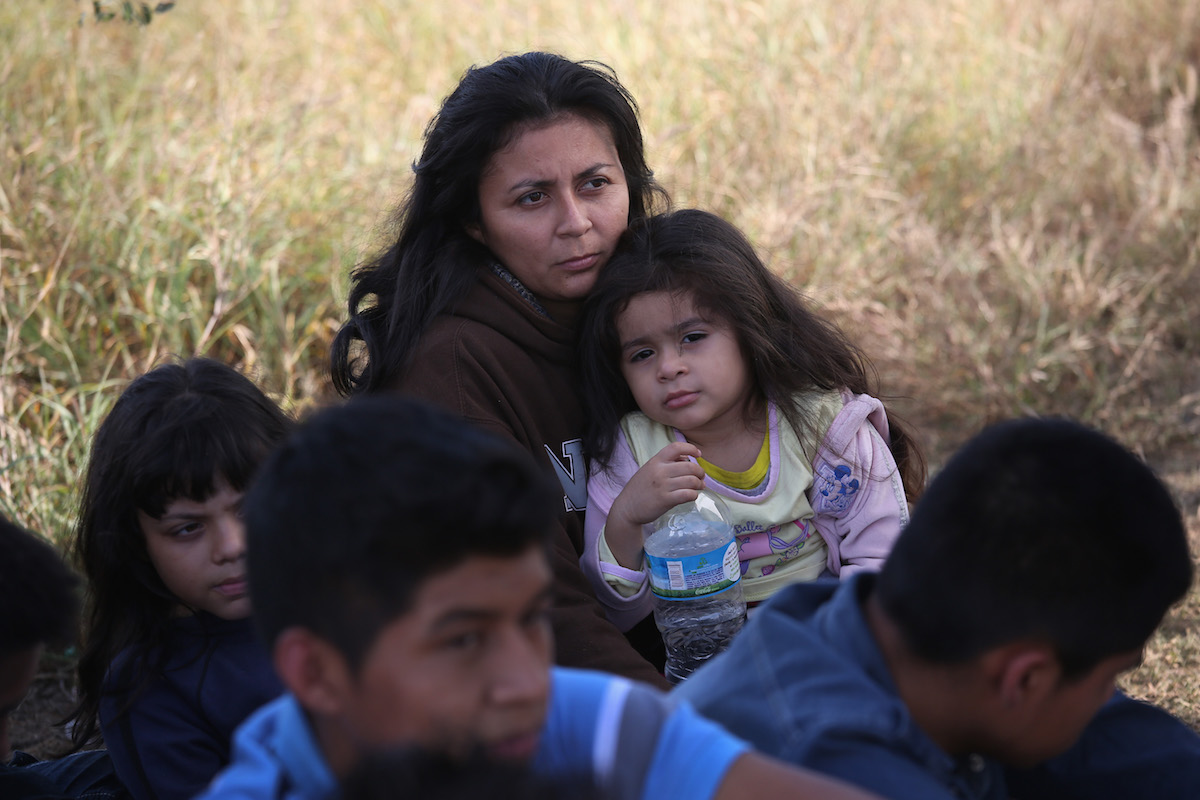 A Honduran mother holds her daughter, 3, after she turned her family in to U.S. Border Patrol agents in 2015 near Rio Grande City, Texas. (Photo by John Moore/Getty Images)

The year is 2017. In the basement of a local church in Tucson, Arizona, I helped a woman from Nebaj, Guatemala, try on a blue sweater—among clothes donated by church members. She had worn the same clothes (a magenta-colored sweatshirt and polyester pants, both now dirty and tattered) for over two weeks during her journey north. Her husband is already in the U.S., he traveled north first, when the violence in their village got personal, and threats were made to the family, to pay up or they would be hurt. Once north, he called on his wife and daughter to follow. Now they are in Tucson, getting ready to board a bus to the Midwest. Granted temporary asylum, they will stay with relatives while they await a hearing to determine their future.

While our news media reports on the Syrian crisis, and most recently, the horrendous killings of innocent children in a hospital, the Trump administration has just begun to delve into U.S. foreign policy. He was moved by those photos from Syria, and I couldn’t agree more that “no child of God should ever suffer such horror.”

At the same time, the U.S. needs to examine a crisis closer to home. Central American refugees, many children victims of violence, are now at risk of being sent back due to the Trump Administration’s proposed bans. A particular program, designed to protect Central American children seeking asylum in the U.S. was put into place under the Obama administration, but with the new policy proposal, this program is temporarily halted.

These children, Central American asylum seekers, are also children of God, and they are asylum seekers, in large part due to U.S. foreign policy and interventionism long before Trump or Obama were in office.

Back in the 1980’s when the U.S. and Soviet Union were in a “Cold War,” it also was a real war fought out in Guatemala, El Salvador and Honduras. At the time, the United States claimed that it were promoting democracy in Central America in order to stave off communism fomented by the Soviets. Yet it is estimated that over 100,000 refugees fled Guatemala and almost double that escaped from El Salvador during those years.

While peace accords were signed in El Salvador in 1992 and in Guatemala in 1996, the truth of the matter is neither democracy nor peace can be imposed from the outside. Both countries were left with festering wounds from our Cold War—wounds of poverty, violence and a sense that others from the outside had determined their destiny.

During the late 1980’s, after obtaining my degree in Public Health, I served with the Catholic Church in a war zone of El Salvador, accompanying internally displaced refugees. I then went to Guatemala, continuing to volunteer, working with a Mayan women’s health network, where government health services could not be adequately provided during its Civil War.

After the peace accords were signed, I returned to El Salvador to work with an international health organization rebuilding water and sanitation systems in rural villages where infrastructure had been destroyed. While the U.S. helped rebuild infrastructure destroyed during the war, the investment was far less than the $6 billion dollars of funding that had poured in to help fight during the Cold War.

As a result of U.S. and Soviet intervention, Central America was left with a legacy of violence, and thousands of families, including my own, had someone killed, kidnapped or wounded during that time. Peace never came to the region, and the unresolved inequalities and amnesties that let war criminals escape justice fuels new waves of violence and corruption. The post-traumatic stress continues today, manifested in nonfunctional democratic institutions, extremely divided political parties and rampant gang violence, where even bus drivers, school teachers and children are held for ransom.

Now as a volunteer at a church’s temporary shelter for Central American refugees, I spend time visiting with women and children: refugees filing for asylum from the violence and havoc of what could have been a democracy.  These women share their stories. They are from places in Central America all too familiar to me. Nebaj, Guatemala, was an area of extreme violence and genocide from a brutal dictator in the 1980s, Efrain Rios Mont, who was backed by the U.S at the time and yet recently tried as a war criminal.

At the shelter in Tucson, I hear a story from a Salvadoran woman, also applying for asylum, whose daughter was being forcibly recruited by a Salvadoran gang, and the local police were unable or unwilling to do anything to protect her. It’s another failed institution that does not promote rule of law.  So the woman and her 14-year-old daughter fled without a moment’s notice for fear for her daughter’s life. She and her daughter risked everything, traveling through Mexico, being detained once there. They tried again and made it to Tucson, planning to reunite with relatives in Tennessee.

As the United States gears up to “make America great again,” let us learn from our past, admit our mistakes and include our Central American neighbors in our new opportunities for prosperity, peace and “greatness.” These are countries that the U.S. directly intervened in militarily and economically to free the region of communism and promote democracy. If there is democracy now, why are these people fleeing?

We, as a nation need to question the model of democracy we have exported.  We are starting a new administration with a new view on our role in the world.  The countries in Central America suffered so much, and we failed to support the necessary social and economic development after our military intervention. Now their people are fleeing at any and all costs, including risking their lives to make it here. At the very least, we should recognize and honor Central Americans requests for political asylum. But we can do better than that. And we should do more than that.

We can create an America that is socially and economically developed so that we will not want or need to migrate, or fear our police, or mistrust our own institutions – in the United States and in Central America so that we may all prosper in a dignified manner. I agree completely, “No child of God should ever suffer such horror.”

Gail Emrick is an international health and economic development specialist, with a joint Masters Degree in Public Health and International Affairs from Columbia University. She is an Arizona native, and a Tucson Public Voices Fellow with The Op-Ed Project.