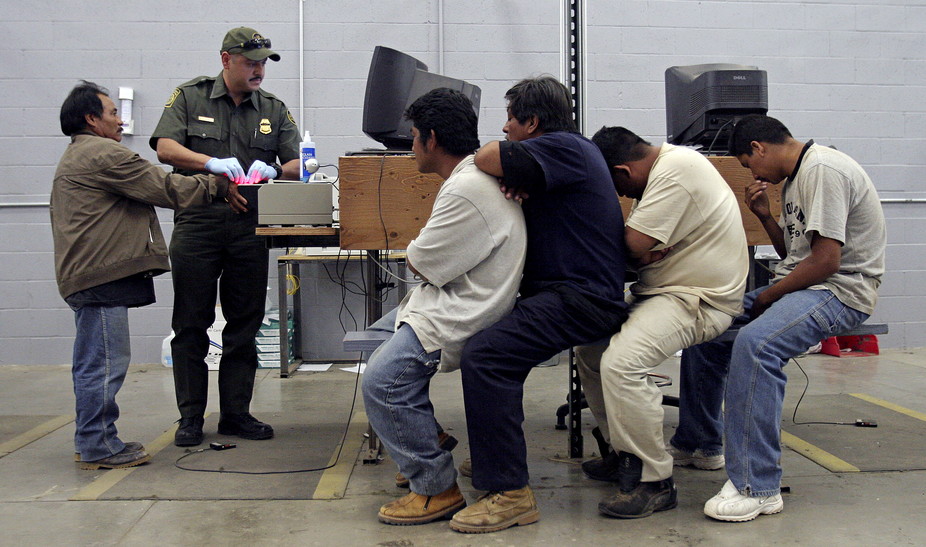 A man has his fingerprints scanned by a U.S. Border Patrol agent while others wait their turn. (Reuters/Jeff Topping)

In the U.S. today, a single immigration case takes an average of 677 days simply to get to the initial scheduling hearing.

There are more than half a million cases in the system, and just over 300 judges working on them. The Trump administration’s push to aggressively enforce immigration laws will make this backlog worse.

Since 2002, funding for immigration enforcement has more than quadrupled, from US$4.5 billion to $20.1 billion in 2016. During the same time period, resources for immigration courts have increased by much less—74 percent.

His budget requests would add to the more than $40 billion that the Department of Homeland Security will receive this year. It would include $4.1 billion to start building a border wall and $2.65 billion to increase the number of immigration detention beds. In comparison, the fiscal 2018 budget requests $80 million to add 75 new immigration judges.

As a law professor, I have devoted my career to representing asylum seekers and studying our nation’s immigration courts. I witness the daily effects of the immigration court backlog on the lives of immigrants.

The U.S. has 57 immigration courts nationwide. The judges in these courts preside over cases in which an individual is in the U.S. and the U.S. government alleges that they may be removable. This includes immigrants who have recently arrived and are seeking asylum protection, lawful permanent residents rendered potentially removable due to a criminal conviction and undocumented immigrants who may be allowed to stay in the U.S.

In 2015, the TRAC Immigration Project out of Syracuse University estimated that full resolution of cases in the backlog would take from 2 to 6 ½ years. Asylum applicants who are seeking U.S. protection from persecution in their home countries may wait five or more years simply for an interview to assess their claim.

The backlog has arisen largely because of an increase in the number of Central American women and children seeking asylum. Many families without authorization are sent to detention centers to be held while they undergo expedited removal.

The expedited removal process was created to bypass the immigration court system and allow for the swift removal of undocumented immigrants. However, if those immigrants say they’re afraid to return home, the Department of Homeland Security must give them a “credible fear interview” to determine if they are eligible for asylum. These individuals can then take their cases to immigration court.

Asylum officers are sent to detention centers to conduct credible fear interviews. Approximately 85 to 90 percent of families interviewed are granted the right to present their case in immigration court.

As of February 2017, there were only 527 asylum officers working in the nation’s eight asylum offices, even though the United States Citizenship and Immigration Services has authorized hiring as many as 625. The nonprofit Human Rights First estimates that 272 of those officers are needed just to conduct credible fear interviews.

Effects of the Backlog

As I have detailed in my work, delays in processing immigrants cause hardships for asylum seekers.

While an asylum seeker is awaiting a decision in their case, they often face financial instability, difficulty finding employment and prolonged separation from immediate family members. Years of delay also make it more difficult for immigrants to find pro bono legal representation.

There’s evidence that such expedited removals circumvent due process for asylum seekers. In some cases, U.S. border officials have even failed to properly implement safeguards to protect asylum seekers from being returned to harm or death. Recently, the U.S. government did not attend a hearing before the Inter-American Commission on Human Rights regarding Customs and Border Patrol illegally turning asylum seekers away from our southern border.

The nonprofit Human Rights First estimates that the U.S. needs at least 524 judges working to address the immigration court backlog, in addition to more law clerks and administrative support.

Solving the problem of our nation’s backlogged immigration courts should be a priority for any administration to ensure that the system functions in a timely and efficient manner.

One thought on “Is the US Immigration Court System Broken?”