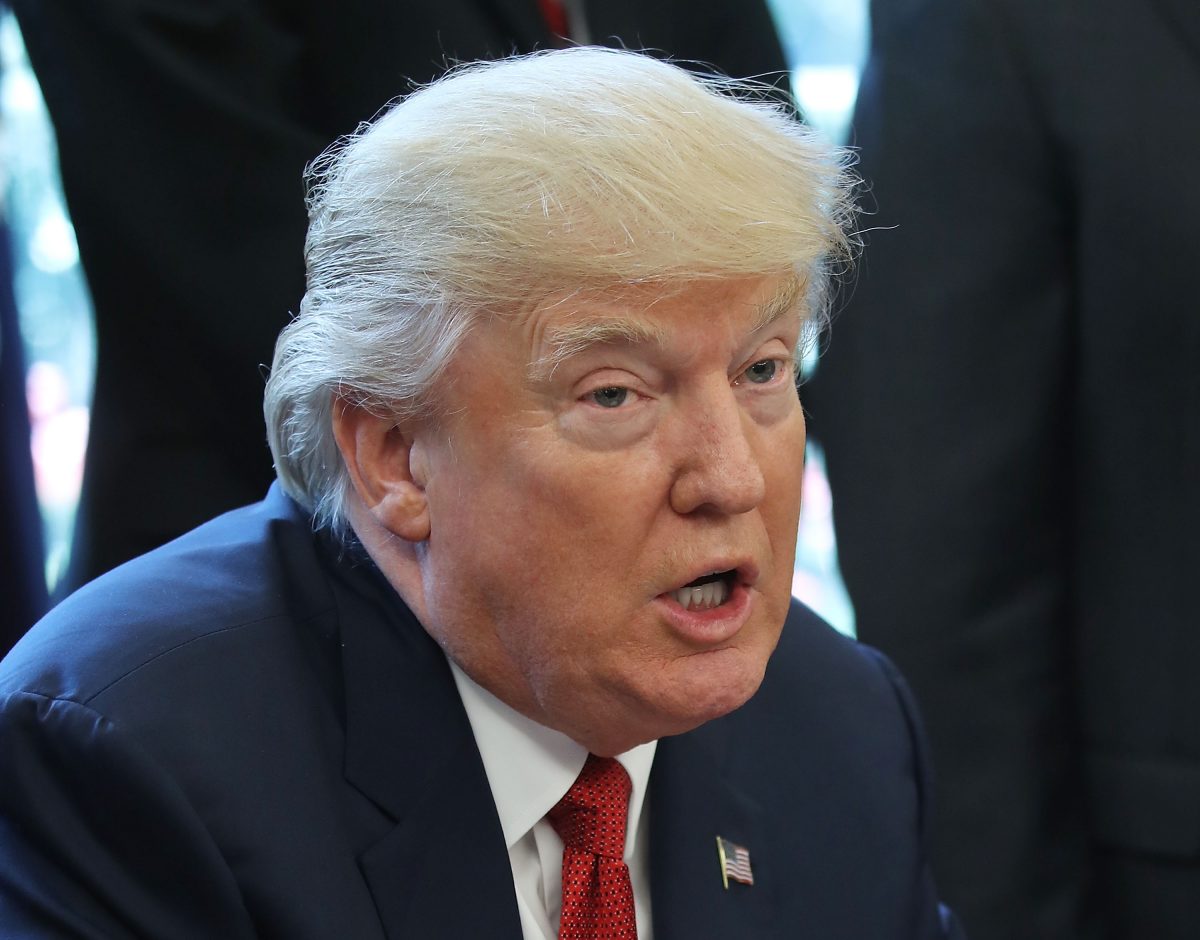 U.S. President Donald Trump in the Oval Office at the White House, on April 20, 2017 in Washington, DC. (Photo by Mark Wilson/Getty Images)

As Donald Trump nears his fist 100 days in office, a coalition of 46 leading Latino advocacy organizations said in an April 19 media release that “we will defend our priorities from attack” in a new administration.

The release summarizes a Wednesday event in Washington, D.C., where many members of the National Hispanic Leadership Agenda (NHLA) met to discuss what it deems as “Latino priorities” from its 2016 Hispanic Policy Agenda report. Some of the priorities included immigration, health care, the economy, education, the environment, and women’s rights—issues that NHLA said “have come under attack.” The NHLA release also noted the importance of “why the Latino community must embrace its political power by remaining engaged and alert through community education, mobilization, digital organizing, and participation in the upcoming census.”

At the event, NHLA also shared a new “First 100 Days: Analysis of the Trump Administration’s early impact on Latino priorities” document, listed below.

What follows are all the quotes in the release attributed to NHLA members:

“Latinos have always been a critical part of our nation’s success, and demographics demonstrate the Latino community’s increased importance in the future,” said Thomas A. Saenz, NHLA Vice Chair and MALDEF President and General Counsel. “The current administration’s apparent willful ignorance of Latino significance will not excuse, in history or at the polls, a failure to address the policy priorities that best serve the Latino community and the nation as a whole.”

“As a community that is integral to our nation’s current and future prospects, Latinos look to any new administration for a strong and optimistic vision of the future, an investment in the health and education of working families, and protections for individual rights and the most vulnerable members of society. In his first 100 days, Mr. Trump has instead advanced policies that needlessly tear families apart through draconian deportation actions, put people’s rights and safety at risk, and seek to bar millions of Americans from health coverage. He has proposed slashing funds from education, health care and more. This approach threatens our nation’s progress and—to say the least—does not reflect the values nor the policy priorities of Latinos, or for that matter, the vast majority of our fellow Americans. We will work in coalition with our partners to hold this administration accountable for their actions,” said Janet Murguía, Co-Chair of NHLA’s Economic Empowerment and Labor Committee and NCLR President and CEO.

“Despite a record Latino turnout in the 2016 elections, President Donald Trump has failed to take into account any of the Latino community’s policy priorities during his first 100 days in office,” stated NHLA Treasurer and LULAC CEO Brent Wilkes. “Rather, Trump has combined his divisive anti-immigrant, anti-civil rights agenda with an economic plan targeted towards further enriching the wealthiest Americans at the expense of everyone else.”

“Today, Latino leaders and community advocates came together to address many critical issues of the utmost importance to the Latino community. The challenges that Latinos face have only grown in the last hundred days, with widespread violations of our rights, divisive anti-immigrant and anti-Latino policies, attacks on women’s health and our LGBTQ familia, rollbacks of environmental protections, and attempts to destroy the Affordable Care Act, which has helped millions of Americans access affordable healthcare, including more than four million Latinos,” said Hector Sanchez Barba, Chair of NHLA and Executive Director of the Labor Council for Latin American Advancement. “Our community has come under serious attack. At the same time that we defend our community, we are also on the offense, offering a positive vision for advancement so that Latinos are afforded the same protections and opportunities as all others. Latinos will not sit quietly as our rights are attacked.”

“The first 100 days of the Trump Administration have been a bumbling, and quite frankly, terrifying mess marked by unconstitutional executive orders, alternative facts, divisive rhetoric and nonsensical budget directives. This administration’s backwards emphasis on criminalizing immigrant communities, targeting religious groups, militarizing border communities, gutting vital government programs, and undermining protections for our environment that have existed for a generation has led to widespread fear and instability across our nation. Working with a divided Congress, the President also sought to repeal the protections provided in the landmark Affordable Care Act, which helped over 4 million Latinos gain health insurance coverage, including cuts to women’s health, preventative services, and most egregiously, would deny health coverage to millions of the elderly and low income. In short, the President has failed at taking a serious look at the nation’s challenges and has refused to build consensus on the real needs of Americans, including on the vital issues of immigration, health care and economic development,” said Laura Esquivel, Co-Chair of NHLA’s Environment and Energy Committee and President of Hispanic Federation.

“As we approach the completion of the first 100 days of the Trump Administration, as advocates, we need to channel our energies in productive and impactful ways. Our compass must remain pointed in the direction that benefits the Latino community nationwide. Though the winds may change in Washington, our goals and efforts remain the same. Now is the time to step up and utilize the voice and strength of our community to keep our agenda moving forward, rather than simply react to chaos,” said Amy Hinojosa, NHLA Latina Task Force Member and President and CEO of MANA, A National Latina Organization.

“In its first 100 days, the Republican Administration has demonstrated that its citizens are not a top priority. From trying to strip millions of healthcare, signaling to privatize public education, and gearing up a mass deportation force that tears American families apart, Latinos have faced the brunt of the President’s cruel policies. American Latino voters have never been more attuned to our democratic process and we encourage the President to reconsider and course correct and we will hold him and Congress accountable,” said Maria Teresa Kumar, NHLA Member and President and CEO of Voto Latino.

“President Trump has been consistent in his unabashed goal of weakening our critical environmental and public health protections in advancement of his own financial interests and those of his corporate allies. GreenLatinos and NHLA will continue to forcefully oppose this Administration’s anti-environment agenda, because it places Latino communities and the health of our families in jeopardy,” said NHLA Member Mark Magaña, President and CEO of GreenLatinos.

“Mobilizing the Latino community in the first 100 days of Trump administration’s attack on core civil liberties is just the beginning of getting ready for the 2018 election. The local organizing that is happening and the political power being built in municipalities, campuses, and states is a result of people understanding the power their vote yields beyond the Presidential Election. The road ahead will be paved with obstacles, but luckily we have the opportunity to work with organizations ready to take on the challenge of building long-term sustainable political power,” said Ben Monterroso, NHLA Member and Executive Director of Mi Familia Vota.