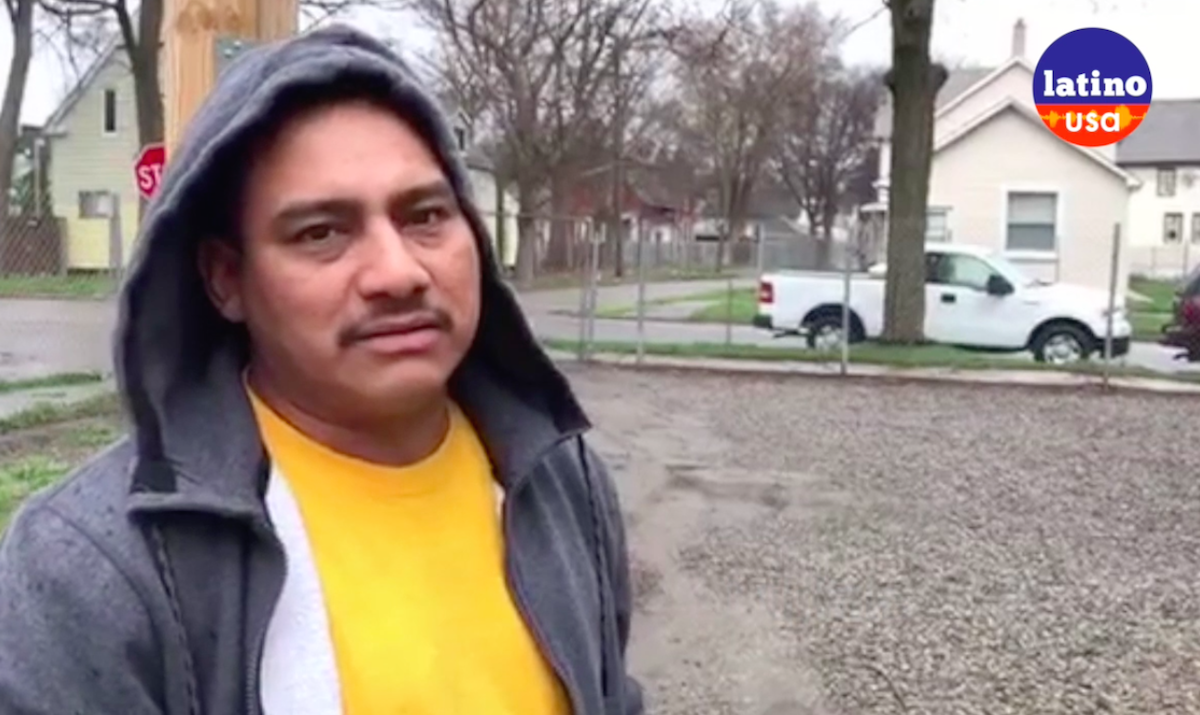 Mario Hernández-Delacruz, days before he was deported. (Screengrab from video by Serena Maria Daniels)

DETROIT — Mario Hernández-Delacruz always seemed to have had a game plan for his family when it came to keeping his family together.

The father of three daughters (two U.S.-born and one DACA recipient) who has spent nearly 20 years in the United States even though he is undocumented, Hernández-Delacruz has always figured out a way to remain in his home in southwest Detroit since he first came into contact with Immigration and Customs Enforcement (ICE) nearly a decade ago.

Three times he’s been ordered to purchase one-way tickets to his home country of Mexico, and each time he’s been successful in prolonging his stay.

Hernández-Delacruz is active in the local immigrant rights movement, using his story of perseverance to speak up for others like him. He’s run a successful carpet installation business. He watched his eldest, Estrella, earn her bachelor’s degree in hospitality studies last August. Each year, he took on another home improvement project to turn his modest Detroit home into a small castle for his girls and wife, Matilde.

Most importantly, since removal proceedings began for him in 2008, the result of a state police stop for driving with a cracked windshield, Hernández-Delacruz has made sure to cooperate with ICE officials regularly, checking in to prove that he’s willing to play by the rules.

This year, as the Trump administration has vowed to crack down on immigrants in violation of immigration law, Hernández-Delacruz was ordered once more to purchase a one-way ticket out of the United States April 14 and say goodbye to his family.

In the week before his ordered removal, Hernández-Delacruz told Latino USA he would choose to fight.

“Buying the ticket is not the problem. It’s my family that will stay here,” the 44-year-old father said. “It’s difficult for me to think about what they’re going to do here alone.”

This time around, Hernández-Delacruz would appeal to the same ICE office he’d been reporting to for the past nine years to have his case reopened and ultimately to have it administratively closed.

To buy time, he would he would get the paperwork started to apply for what’s known as a U visa, which is granted to undocumented immigrants who have helped law enforcement in the investigation of criminal activity.

Victor Mendez, an organizer with BAMN (the Coalition to Defend Affirmative Action, Integration and Immigrant Rights and Fight for Equality By Any Means Necessary), met Hernández-Delacruz at an immigrant rights march a few weeks before his scheduled flight, and explains that that special visa could be a possibility because Hernández-Delacruz helped Detroit police investigate a string of thefts and vandalism in his neighborhood by suspected gang members.

“We believe that Mario wants to fight for himself,” says Mendez.

To assist with the application, Hernández-Delacruz would turn to Shanta Driver, an attorney and executive director for United for Equality and Affirmative Action Legal Defense Fund, who says that she rushed in the days ahead of his pending departure to gather enough documents in support of his U visa appeal, thus granting him a stay in his removal order.

Driver calls Hernández-Delacruz’s predicament a “silent deportation” in that ICE agents have never come to his house, pounding on his door. He’s never been in trouble with the law, other than that 2008 traffic stop and he’s been vigilant about reporting to ICE regularly, lest he be considered uncooperative.

“He’s very much the opposite of the kind of person who should be deported,” Driver says.

Yet when Hernández-Delacruz reported to ICE earlier this year, instead of a routine check-in, he was told his time was up.

Just a day before takeoff, he was running out of options.

Latino USA first came into contact with Hernández-Delacruz in March at Central United Methodist Church in downtown Detroit. He and a coalition of immigrant rights supporters were there as part of an announcement that a handful of Michigan churches would join a statewide “sanctuary movement” where undocumented immigrants could seek shelter and presumably avoid detention.

As his case was being considered, Hernández-Delacruz also deliberated whether a sanctuary church would be a safe option for him.

By law, harboring an undocumented immigrant is considered unlawful, though ICE officials are generally discouraged from conducting enforcement activities in “sensitive locations,” including churches.

The so-called “new sanctuary movement” was born in the 1980s at the Southside Presbyterian Church in Tucson, Arizona, when refugees from the civil wars in Central American fled to the United States. It eventually swelled to include several hundred other congregations across the country and won inclusion in asylum laws in President Reagan’s 1986 immigration reform. In recent years, the movement has been reignited, though in much smaller numbers.

Though Hernández-Delacruz showed his support of the reimagined Michigan movement, in practice, he and his family had to decide whether this option would be right for him.

Unlike in the 1980s, when immigrants seeking refuge in churches benefited from large numbers and publicity, today Hernández-Delacruz would likely be alone, in a church far from his family (the congregation he belonged to in southwest Detroit did not belong to the network), and if ICE agents found out he skipped out on his flight, what would become of his family?

“It became terribly stressful for the family when all of their options were laid out in front of them,” Driver says.

Hernández-Delacruz has always been the sole breadwinner for his three daughters and wife. Though his eldest Estrella holds a bachelor’s degree, she only works part-time, not enough to support everyone.

Going into hiding and evading ICE after all these years of cooperation, would throw away any chance, however distant, Hernández-Delacruz would have from getting at U visa.

And so on April 14, Hernandez boarded his one-day flight to Cancún, where his mother and sister live. He hasn’t been back in nearly 20 years.

Asked if he knew what his plans were, he replied in Spanish via text while waiting for his flight at the airport: “No sé.” (“I don’t know.”)

2 thoughts on “The ‘Silent Deportation’ of Mario Hernández-Delacruz”