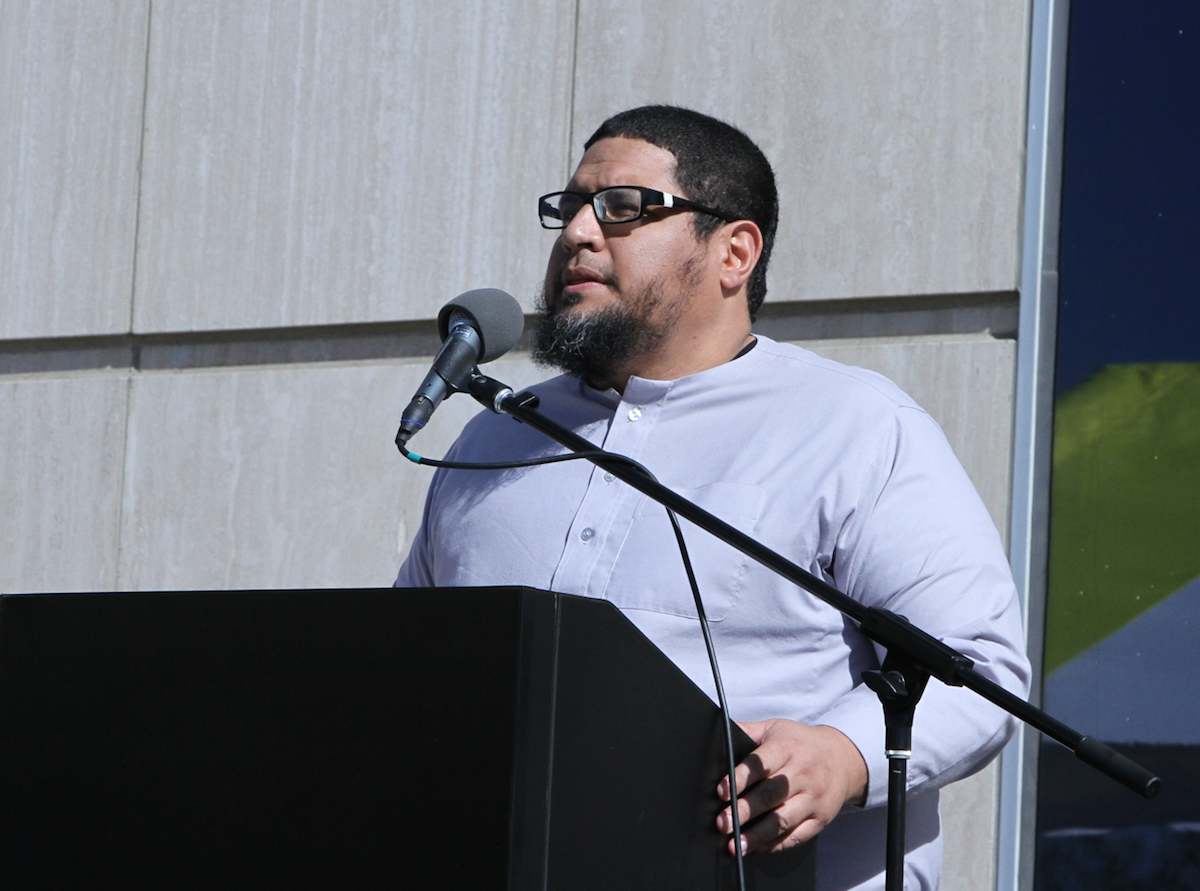 Imam Isa Parada shares some word at the grand opening of what is believed to be the nation's first Spanish-speaking mosque. (Courtesy photo from Islam In Spanish)

HOUSTON – Growing up in a neighborhood where gang violence and crime prevailed, Isa Parada could have ended in prison or dead. Instead he chose to convert to Islam, a decision that tested his family bonds and forever changed his life. Today, he is the first full-time Muslim leader, or imam, at Centro Islámico, believed to be the nation’s only Spanish-speaking mosque.

His journey began when his parents immigrated to New York from El Salvador in search of a better life and moved their family to Houston after learning the cost of living was lower and the neighborhoods were safer. Parada, who previously attended Catholic school and was an altar boy, was suddenly thrust into a hostile environment plagued with negative influences. Though his working-class parents had instilled in him the importance of hard work, faith and family, Parada began hanging out with the wrong crowd.

“Those morals and values they had taught me, such as being proud of who I was and never changing who I was, being very strict about speaking Spanish at home, were tested,” Parada said.

His own father ended up in prison for 13 years during Parada’s most trying stage in life: adolescence. Parada grew into an angry young man who resented the white community and the way government worked. He had little regard for women, his own health and other people’s property.

His older friends tried keeping him from falling into the same traps they had. Parada also noticed how his choices were affecting the women in his family, especially his younger sister.

At 19 years old, he decided to reconsider religion to confront his issues, but felt drawn to Islam over Christianity after reading Muslim leader and activist Malcolm X’s autobiography, which resonated with his own experiences.

“He went from growing up in a good environment to a criminal one, to having racist feelings for white people, and Islam changed his life,” Parada said. “He wanted justice for his people and general good for society, as a whole, and I really related to that and it made it easier to connect with his story and Islam.”

Parada opted for a new name, Isa, which means Jesus in Arabic, over his birth name of “Christian.” The drastic change did not come without tension and apprehension from those closest to him.

“My father thought I was going to be a terrorist as he watched old Chuck Norris movies and had a real negative view of Islam,” he said. His mother and older sister thought that by converting to Islam, Parada was rejecting Jesus and would go to hell.

Parada had them read the chapter of the Quran dedicated to the Virgin Mary, the mother of Jesus, which opened their eyes and respect toward Islam.

“They didn’t know anything about Islam outside what they saw in the news so they sort of took a step back and observed my growth,” Parada said. His father, who was still in prison at the time, also noticed Parada’s focus shift to bettering his community, particularly youth.

Since converting in 1996, Parada became fluent in Arabic and an expert in Muslim theology, after spending the early 2000s studying at the Islamic University of Madinah. At age 20, he married Felicia Martin, a black woman and early convert like himself, and together raise six daughters and two sons, three of whom were born in the Middle East.

A Latino Muslim community was forming in Houston shortly before he left for his studies. The Sept. 11, 2001, tragedy left much of the community fearful and apprehensive of the Muslim community and Houston Hispanic converts such as Parada sought to change that. The Islamic faith community hadn’t dealt with Hispanics before and resources for Spanish-speaking converts were lacking.

Colombian convert Mujahid Fletcher founded the nonprofit Islam in Spanish to fill the gap by providing multimedia resources and products to educate Latinos in Spanish worldwide about the Muslim faith. Since its inception, the nonprofit has expanded to a handful of national chapters, including in Dallas, New Jersey, and most recently, Chicago and Colombia.

The latest data from Pew Research Center shows there are 2.6 million Muslims in the United States, including 6 percent (or 160,000) who are Latino. Currently, one of every 10 American-born converts are Latino.

The Muslim community continues to battle stigma resulting from the 2001 attacks and it’s something Parada says he will never forget. “We’re trying to look at the positive projects and programs that came out of it, and Islam in Spanish is one of those,” he said.

The nonprofit opened Centro Islámico in January 2016 to bridge the gap among Latino Muslims and Latinos, as well as Latinos and Muslims in general. The initial sermons opened with 15 to 20 physical members and have grown to about 80, as well as the countless people in Spain and Latin America who tune in online via YouTube and other means.

As imam, Parada is charged with overseeing educational programs, outreach efforts and providing spiritual counseling. Becoming the first full-time imam at the mosque is a dream realized for Parada, who was the first American Latino to graduate from his university.

“I felt a sense of responsibility, but being able to educate my family and my community about Islam and becoming the imam, it was something you can say was a dream.”

One thought on “At Houston’s Spanish-Speaking Mosque, Latino Imam Reflects on How He Got There”