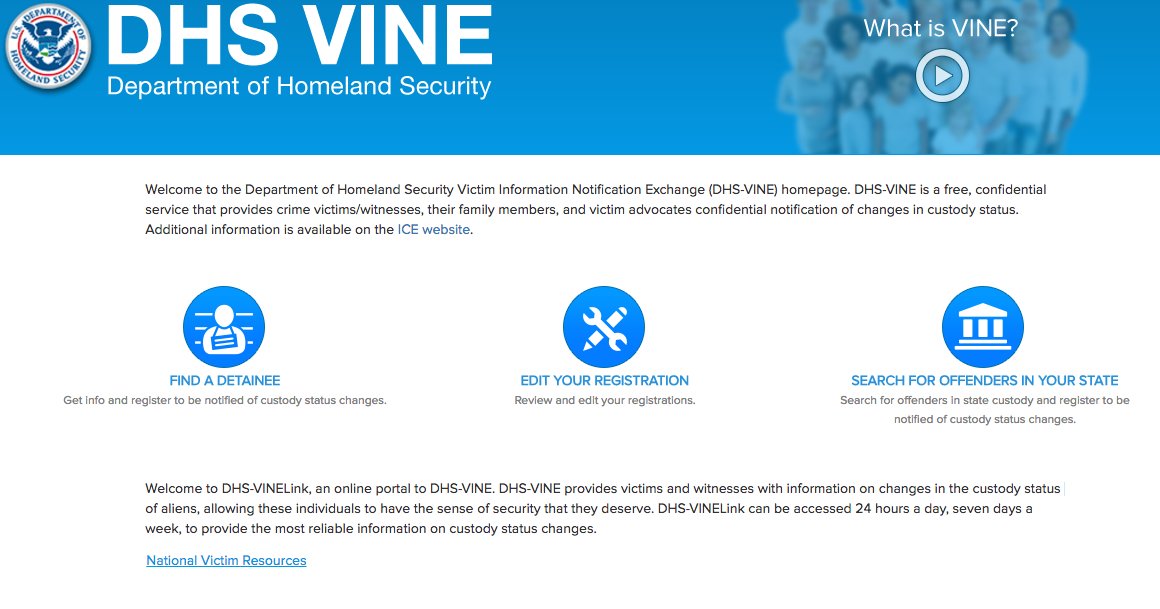 After being alerted Wednesday evening by Latino USA that a new online database of detained immigrants for the Victims of Immigration Crime Engagement Office (VOICE) included names of children as young as two years old, a Department of Homeland Security spokesperson said late Wednesday night that “a lapse in privacy protocols” has been rectified.

“The Department of Homeland Security’s policy is and remains to protect the information of minors in our custody,” DHS spokesperson Gillian Christensen said via email. “Following the April 26 launch of the DHS-Victim Information and Notification Exchange (DHS-VINE) the appropriate filter was not applied to the data being made available to site users, which allowed for a lapse in privacy protocols. Once identified, ICE immediately began work to resolve the issue and restored the appropriate filters to the system within hours. Consistent with DHS policy, information about minors in ICE custody is no longer available through DHS-VINE.”

Christensen’s response came after Latino USA tested DHS-VINE around 8pm ET on Wednesday night. Latino USA had entered the search query of “M. Martinez” as a name and “El Salvador” as a country of residence. About 9 of the more than 30 results included the names of detained children between ages 2–17.

At 8:27pm ET, Latino USA emailed DHS about why minors were included in this database, which, according to a April 26 DHS press release,  was “an automated service being launched today that will help victims track the immigration custody status of illegal alien perpetrators of crime.”

By 8:36pm ET, Christensen acknowledged receipt of the email and included press contacts from Immigration and Customs Enforcement (ICE). ICE told Latino USA in an 8:39pm ET email that it could set up a call on Thursday morning with one of the officials at VOICE to talk about the database. Latino USA agreed to the call and decided to not file a story about the database until it spoke with someone at VOICE, the new ICE office that the DHS release said “will assist victims of crimes committed by criminal aliens.”

At 11:16pm ET, Christensen emailed Latino USA with the statement about how the online filters were not applied to the database, the same statement that appeared in a Wednesday night Los Angeles Times story about why minors were included in the database. According to the Times, “A 3-year-old boy from El Salvador detained in Texas at Karnes Residential Center —an immigration detention center— and a 4-year-old Guatemalan girl in Phoenix were just some of the scores of children listed in the public system.”

On Thursday morning, Latino USA re-entered the same  “M. Martinez/El Salvador” search query, and no minors under 18 were listed. In addition, Latino USA contacted Appriss, the company listed at the bottom of the DHS-VINE page, to ask what happened with the launch of the DHS-VINE page and whether it had fixed the filter on Wednesday night. As of this posting, Appriss has yet to respond.

Also on Thursday morning, Latino USA reconnected with ICE to see if it could speak to a VOICE official and also answer questions about how the DHS-VINE page is being explained by different platforms. For example, according to the DHS April 26 media release, DHS-VINE can be used to “help victims track the immigration custody status of illegal alien perpetrators of crime” and will also offer “automated alerts” to people who register. However, when visiting the actual DHS-VINE page, it says that “DHS-VINE is a free, confidential service that provides crime victims/witnesses, their family members, and victim advocates confidential notification of changes in custody status.” It also adds that “DHS-VINE provides victims and witnesses with information on changes in the custody status of aliens, allowing these individuals to have the sense of security that they deserve.” The ICE.gov VOICE announcement about DHS-VINE, says that ICE is providing “assistance signing-up to receive automated custody status information about an alien in custody (DHS-VINE).”

Furthermore, when a user clicks on “Search for Offenders in Your State,” it goes to VineLink.com, which describes itself as “an online portal to VINE, America’s number one victim notification network. VINE has been providing victims and concerned citizens with the power of information for decades, allowing these individuals to have the sense of security that they deserve.” (Appriss also includes a video overview about VINE.)

Latino USA also asked ICE about whether the new DHS-VINE portal lists all immigrant detainees over 18 and to clarify what the terms “Final Book-Out” and “Initial Book-In” mean. It also asked about whether the database includes asylum seekers, which would essentially violate government privacy policies. As of this publication, ICE has yet to respond to these additional questions. If ICE responds, Latino USA will provide an update.

Q: Are all detainees 18 and over being listed in the DHS-VINE database?
A: Information on aliens younger than 18 years of age, based on the date of birth the alien provides, is filtered out of search results in DHS-VINE.

Q: What do terms like “Final Book-Out” and “Initial Book-In” mean in the database?
A: Those terms refer to events in the immigration enforcement lifecycle when an alien leaves ICE custody and enters ICE custody, respectively.

Q: Why is there a Search for Offenders in Your State link on vinelink.dhs.gov that takes users to vinelink.com?
A: VINELINK.com is a portal to register to receive notifications on criminals who are incarcerated state and local custody. DHS-VINE is linked to VINELINK.com to ensure notifications to registrants continue as the alien leaves the criminal justice system and enters ICE custody.

Q: Who exactly is part of the database? We noticed that some detainees are in family residential centers. Are some of these names asylum seekers?
A: The VINE database includes information on aliens on whom ICE has lodged a detainer, who have been booked into ICE custody, or have been booked out of ICE custody. Those are the events that trigger the notification process (for example, notification of entering ICE custody).

ICE takes seriously its responsibility to protect personal information in accordance with law and policy while at the same time providing useful information to victims, families and their representatives.

I can also confirm to you that consistent with 8 C.F.R. Section 208.6, no asylum related information is disclosed in VINE.