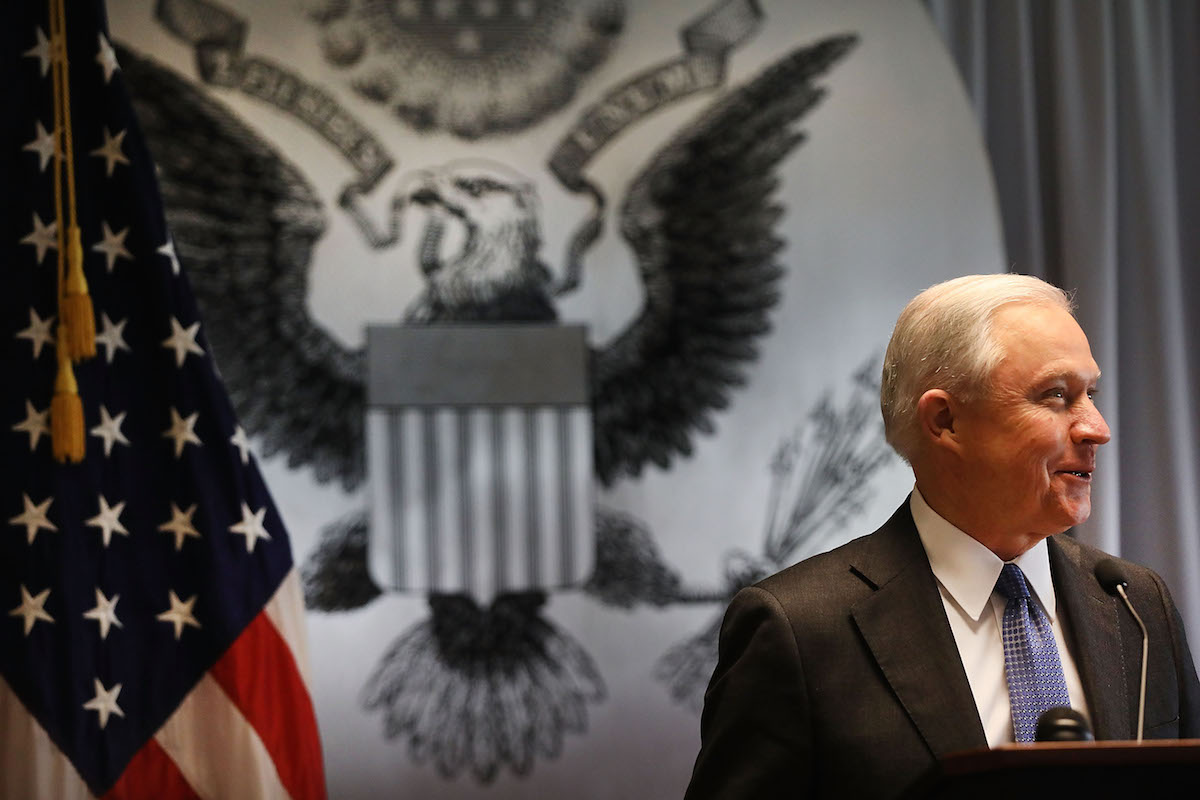 It was not always a crime to enter the United States without authorization.

In fact, for most of American history, immigrants could enter the United States without official permission and not fear criminal prosecution by the federal government.

That changed in 1929. On its surface, Congress’s new prohibitions on informal border crossings simply modernized the U.S. immigration system by compelling all immigrants to apply for entry. However, in my new book “City of Inmates,” I detail how Congress outlawed border crossings with the specific intent of criminalizing, prosecuting and imprisoning Mexican immigrants.

Knowing this history is important now. On April 11, 2017, U.S. Attorney General Jeff Sessions announced his plan to step up prosecutions of unlawful entries, saying it’s time to “restore a lawful system of immigration.” This may read like a colorblind commitment to law and order. But the law Sessions has vowed to enforce was designed with racist intent.

The criminalization of informal border crossings occurred amid an immigration boom from Mexico.

By 1930, nearly 1.5 million Mexican immigrants lived north of the border.

U.S. employers had eagerly stoked the era’s Mexican immigration boom by recruiting Mexican workers to their southwestern farms, ranches and railroads, as well as their homes and mines. By the 1920s, western farmers were completely dependent on Mexican workers.

However, they also believed that Mexican immigrants would never permanently settle in the United States. As agribusiness lobbyist S. Parker Frisselle explained to Congress in 1926, “The Mexican is a ‘homer.’ Like the pigeon he goes home to roost.” On Frisselle’s promise that Mexicans were “not immigrants” but, rather, “birds of passage,” western employers successfully defeated proposals to cap Mexican immigration to the United States during the 1920s.

Monitoring the rise of Mexican American communities in southwestern states, the advocates of a whites-only immigration system charged western employers with recklessly courting Anglo America’s racial doom. As the work of historian Natalia Molina details, they believed Mexicans were racially unfit to be U.S. citizens.

Western employers agreed that Mexicans should not be allowed to become U.S. citizens. “We, in California, would greatly prefer some set up in which our peak labor demands might be met and upon the completion of our harvest these laborers returned to their country,” Friselle told Congress. But western employers also wanted unfettered access to an unlimited number of Mexican laborers. “We need the labor,” they roared back at those who wanted to cap the number of Mexican immigrants allowed to enter the United States each year.

Amid the escalating conflict between employers in the West and advocates of restriction in Congress, a senator from Dixie proposed a compromise.

Sen. Coleman Livingston Blease hailed from the hills of South Carolina. In 1925, he entered Congress committed, above all else, to protecting white supremacy. In 1929, as restrictionists and employers tussled over the future of Mexican immigration, Blease proposed a way forward.

According to U.S. immigration officials, Mexicans made nearly 1 million official border crossings into the United States during the 1920s. They arrived at a port of entry, paid an entry fee and submitted to any required tests, such as literacy and health.

When the debate stalled over how many Mexicans to allow in each year, Blease shifted attention to stopping the large number of border crossings that took place outside ports of entry. He suggested criminalizing unmonitored entry.

According to Blease’s bill “unlawfully entering the country” would be a misdemeanor, while unlawfully returning to the United States after deportation would be a felony. The idea was to force Mexican immigrants into an authorized and monitored stream that could be turned on and turned off at will at ports of entry. Any immigrant who entered the United States outside the bounds of this stream would be a criminal subject to fines, imprisonment and ultimately deportation. But it was a crime designed to impact Mexican immigrants, in particular.

Neither the western agricultural businessmen nor the restrictionists registered any objections. Congress passed Blease’s bill, the Immigration Act of March 4, 1929, and dramatically altered the story of crime and punishment in the United States.

With stunning precision, the criminalization of unauthorized entry caged thousands of Mexico’s “birds of passage.” By the end of 1930, the U.S. Attorney General reported prosecuting 7,001 cases of unlawful entry. By the end of the decade, U.S. Attorneys had prosecuted more than 44,000 cases.

According to the U.S. Bureau of Prisons, the vast majority of immigrants imprisoned for breaking Blease’s law were Mexicans. Throughout the 1930s, Mexicans never comprised fewer than 85 percent of all immigration prisoners. Some years, that number rose to 99 percent. By the end of the decade, tens of thousands of Mexicans had been convicted of unlawfully entering or re-entering the United States. The U.S. Bureau of Prisons built three new prisons in the U.S.-Mexico border region: La Tuna Prison in El Paso, Prison Camp #10 in Tucson and Terminal Island in Los Angeles.

Only the outbreak of World War II halted the Mexican immigrant prison boom of the 1930s. The war turned the attention of U.S. Attorneys elsewhere and Mexicans workers were desperately needed north of the border.

With few exceptions, prosecutions for unlawful entry and reentry remained low until 2005. As a measure of the War on Terror, the George W. Bush administration directed U.S. Attorneys to adopt an “enforcement with consequences” strategy. In 2009, U.S. attorneys prosecuted more than 50,000 cases of unlawful entry or re-entry. The Obama administration continued the surge, betting that aggressive border enforcement would help bring a recalcitrant Congress to adopt comprehensive immigration reform. It did not.

By 2015, prosecutions for unlawful entry and reentry accounted for 49 percent of all federal prosecutions and the federal government had spent at least US$7 billion to lock up unlawful border crossers.

Attorney General Sessions still wants more. Traveling to southern Arizona to announce his plan to even more aggressively prosecute unlawful entry, he signaled that, in the years to come, most prosecutions will happen on the U.S.-Mexico border and will target Mexicans and Central Americans.

When the number of Mexicans as well as Central Americans imprisoned on immigration charges soon booms, there will be nothing unwitting or colorblind about it. Congress first invented the crimes of unlawful entry and reentry with the purpose of criminalizing and imprisoning Mexican immigrants and it has delivered on that intent since 1929. The Sessions plan will bear a similar result and, in the process, discharge the racist design of Blease’s law.