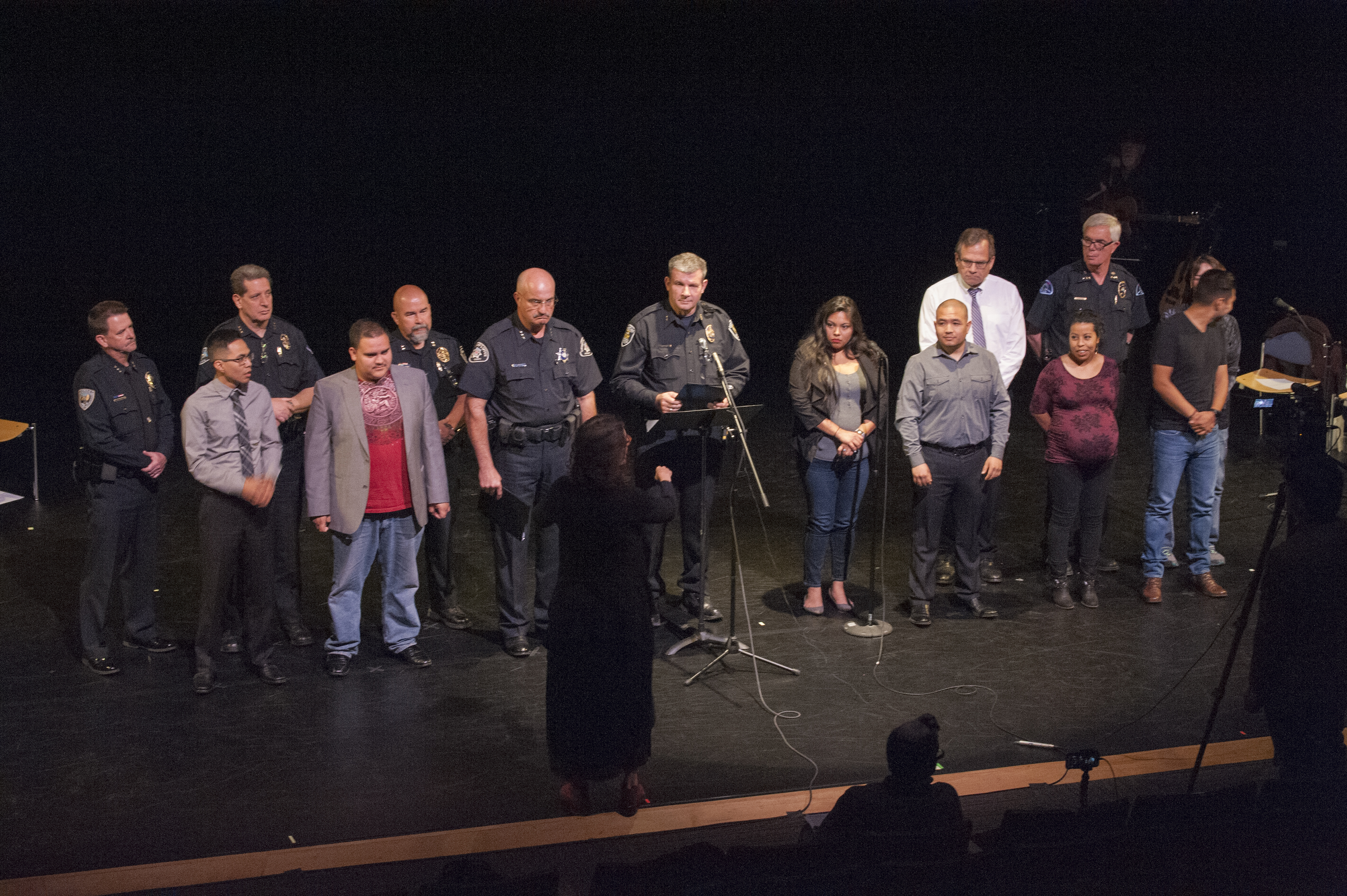 On April 30, a group of DREAMers and law enforcement leaders stood on a stage in front of a sold-out crowd in Boulder, Colorado, for a performance centering around the immigrant experience in the United States. The show, titled “Do You Know Who I Am?,” featured monologues written by young undocumented immigrants and, for the first and only time, was read by eight criminal justice system authority figures—including the Boulder County district attorney, the county’s sheriff and five community police chiefs.

“It became very clear throughout the presidential primaries, as well as the election that we needed to disrupt the association between criminality and documentation status,” Kirsten Wilson, artistic director and founder of Motus Theater, told Latino USA. Wilson had teamed up with a local group of DREAMers from Northern Colorado Dreamers United to produce “Do You Know Who I Am?” and toured the show from 2013 to 2016 throughout Colorado, but it was after the election that she realized more needed to be done.

“We have some amazing law enforcement leaders in Boulder County” Wilson said. “How powerful it would be for them to speak those stories? What a better way of disrupting the false associations than to have law enforcement tell the stories of undocumented leaders in our community.”

The almost hour-long performance featured a reading of “La Frontera” (translated to “The Border”), written by DREAMer Ana Casas and read by Boulder Country district attorney Stan Garnett. When Casas hit the stage, she said that her monologue was “dedicated to all the kids who grew up in the United States and have been deported to a country they don’t know.”

The monologue was personal to Casas, as it told the story of her brother Luis’ deportation at the age of 18.

“My story was a story that I thought was important to be told, but it was really hard to tell. It was the hardest,” Casas told Latino USA.

Casas was born in Zacatecas, Mexico ,and she was 11 when she arrived to the U.S. Her brother Luis, also born in Mexico, was six.

“He was a honor roll student in middle school and he started off good in high school too, but suddenly he changed,” Garnett read on stage. “He started smoking weed and drinking and he got caught. What a perfect example of a double standard. A Mexican teenager smoking weed is a criminal? A white teenager or even an adult smoking weed, they’re only passing the time.”

“What happened to my brother?” Garnett continued. “Well, besides the normal teenage craziness he realized what it meant to be undocumented.”

A few days after the performance, Garnett spoke with Latino USA about the reading.

“It was an emotional experience for me. I have two sons and the idea of her brother being deported when he just turned 18 was tough,” Garnett said. “My mother died when I was 19 so it clearly tapped into some of the emotion I felt in my own life about that loss, because I think this kind of deportation is somewhat analogous to a death in the family. It was very emotional, very powerful for me.”

Both Casas and Garnett agreed the performance was a way to not only share stories of the immigrant experience, but to also reach out to the non-immigrant members of the community.

“I know that other law enforcement, the jefes, and the district attorney are working really hard [to build trust] but they also have their deputies, their officers, employees who don’t necessarily think like them, but maybe by them telling our story, they were able to reach those individuals,” Casas said.

Boulder residents were not the only audience members. The performance was also streamed live on Facebook and as of press time, had 10,000 views. “My brother was watching through the Facebook Live stream,” Casas said. “It is his story and I’m telling it to hundreds of people live. I was thinking, ‘Luis I hope you think that this is OK.'”