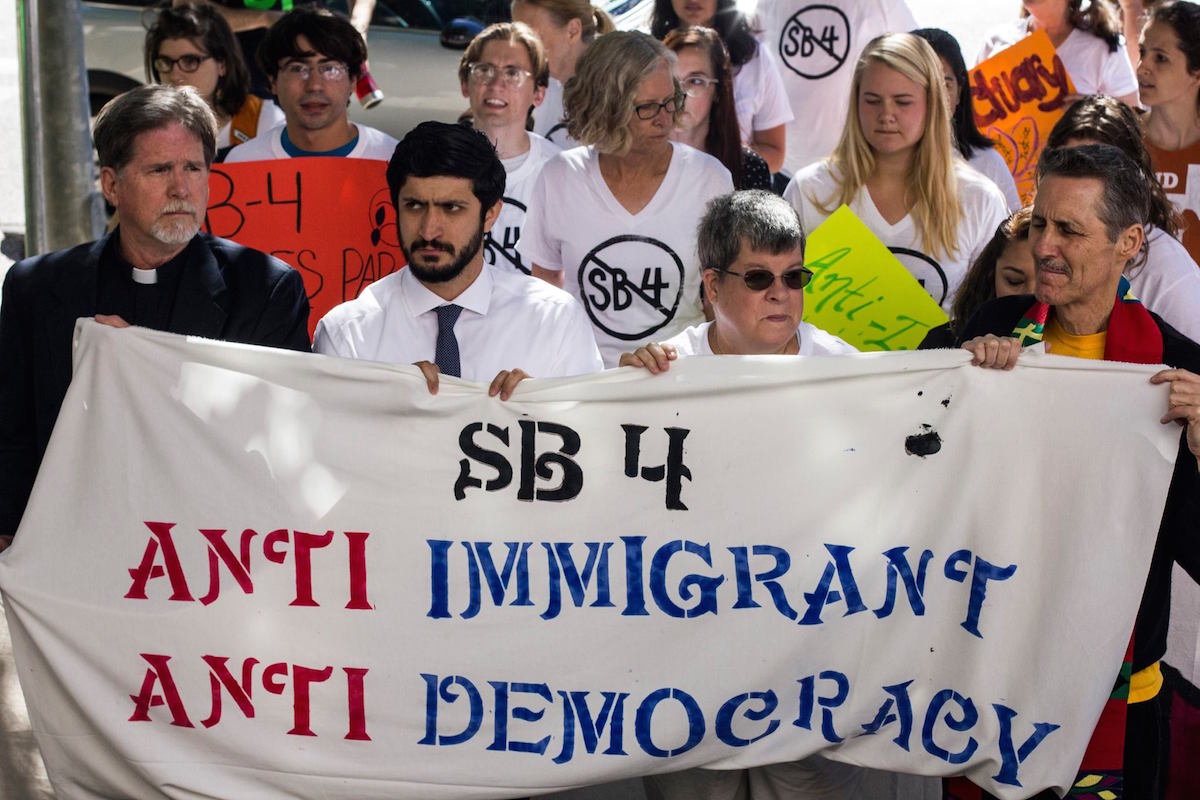 Protesters heading to the lobby of Texas governor Greg Abbott in early May of 2017. (Photo by Marco Galaviz Luna)

AUSTIN — The day after Texas Governor Greg Abbott signed a controversial immigration bill into law during an unprecedented Facebook live event Sunday evening, both supporters and opponents of Senate Bill 4 (SB4) have already begun to take the battle to the courts.

Attorney General Ken Paxton filed a lawsuit Monday afternoon to uphold the constitutionality of the law, anticipating pushback from opponents of SB4. The state is suing the City of Austin, Travis County and the Mexican American Legal Defense and Education Fund (MALDEF) for their “unwillingness” to cooperate, but MALDEF and other immigration advocates vowed to challenge the lawsuit in court.

Meanwhile, the League of United Latin American Citizens (LULAC) wasted no time Monday and sued the State of Texas, Abbott, Paxton and other “as yet unnamed state officials” for “following legal violations in connection with their enactment, administration, enforcement (both threatened and actual) of Senate Bill 4” as signed into law Sunday. Other plaintiffs include the City of El Cenizo, El Cenizo Mayor Raul L. Reyes, Maverick County Sheriff Tom Schmerber, Maverick County Constable Mario A. Hernandez and Bexar County Constable Ruben Tejeda.

“Texas strongly supports the legal immigration that has been a part of our state from the very beginning,” Abbott said during his Facebook live event Sunday. “But, legal immigration is different from harboring people who have committed dangerous crimes.”

Before Abbott signed SB4 into law, outspoken progressive leaders, such as Travis County Sheriff Sally Hernandez, had the discretion to enforce these “sanctuary laws.” After Abbott cut funding to Travis County, Hernandez went from refusing federal detainer requests without just cause, to making decisions on a case-by-case basis.

“It should be obvious that my implementation of a policy, meant to meet our community’s needs, did not violate any laws. Otherwise, the Texas Legislature wouldn’t have felt compelled to make a new one,” Hernandez said in a statement released as SB4 headed to the governor’s desk for signing.

Who the Law Impacts

Immigration advocates and some law enforcement groups believe the new law will hurt the most vulnerable who are afraid to report crimes and risk deportation.

Olivares said courts around the country found ICE detainers non-compliant with constitutional due process. By enforcing this new law, Olivares said he believes cities, counties and law enforcement officials will have the right to detain individuals without probable cause.

“What [Abbott] was talking about was cracking down on undocumented immigrants who are criminals,” Olivares said. “This bill is much broader than that and comes at the expense of other immigrants who have not committed any crimes whatsoever, and find themselves swept into this misguided law that may result in their unconstitutional arrest and potential deportation.”

Law enforcement officials argue that they are committed to upholding the law and serving the public, but could not guarantee there would not be collateral damage when enforcing SB4.

“I’ve never gone after victims or witnesses of crime unless they’ve committed another crime,” said Sheriff A.J. Louderback, legislative director of pro-SB4 group Sheriffs’ Association of Texas. He emphasized the intent of SB4 is to require Texas jails to honor federal detainers, not create a policy where officers can act as immigration agents.

But Louderback would not confirm to Latino USA that unauthorized immigrants reporting a crime would not run any risk of potential deportation.

Meanwhile, the Texas Major Cities Chiefs and Texas Police Chiefs Association published a letter to the editor in metro newspapers throughout the state, opposing SB4 as amended by the Texas House of Representatives in late April.

The letter argues SB4 requirements could “further strain” relationships among local law enforcement and the communities they serve, when officials inquire about immigration status.

“This will lead to distrust of police, less cooperation from members of the community and will foster the belief that they cannot seek assistance from police for fear of being subjected to an immigration status investigation,” the letter states.

What Opponents Are Saying

“This is his signature victory. He’s been thinking about this for a long time,” said Cristina Parker, immigration programs director for immigration advocacy group Grassroots Leadership. “He knows people would protest against him and that would have been overwhelming. It’s really shameful and disrespectful. There’s a lot of people taking to the streets.”

At the start of May, more than 20 people were arrested while protesting in the lobby of the governor’s office, including church pastors and Austin City councilman Greg Casar.

Timing of the law’s signage did not surprise MALDEF president Thomas A. Saenz, who says the implications of SB4 are “even more monstrous” than Arizona’s 2010 immigration crackdown, which critics dubbed the “show me your papers law.”

Saenz explained there are many legal problems with the law, extending from police officers’ right to ask someone they’ve stopped about their immigration status to racial profiling and arresting local officials refusing to comply with ICE detainers.

Immigration advocates have no plans to slow down, as evidenced by LULAC’s Monday lawsuit.

National President Roger C. Rocha, Jr., said the intent of the lawsuit is to block implementation of SB4 as a “violation of multiple protections in the U.S. Constitution.”

“We believe it is unconstitutional for the State of Texas to attempt to coerce local law enforcement into becoming de facto federal immigration agents,” Rocha told Latino USA.

Meanwhile, the Austin-based Grassroots Leadership group plans to strategize and pressure local governments to not comply with the law.

“I think, ultimately, that’s what needs to be done,” Parker said.

MALDEF officials said they aim to get Texas back on track.

“The state bespeaks its own apparent high anxiety about the legality of Abbott’s Folly, SB4, by seeking a preemptive strike through this lawsuit,” Saenz said in a Monday afternoon press release. “Texas repeats a gambit attempted by California Gov. Pete Wilson in defending the notorious Proposition 187 over 20 years ago. So, MALDEF has been through this before; we successfully defeated Wilson’s preemptive suit and will do the same here.”

He advises Texans to remain calm in the interim.

“It does not take effect until September 1 and there will be lawsuits,” Saenz told Latino USA. “I think we have a very good chance to prevent it from being implemented. There’s no reason for anyone to react quite yet, other than expressing their views and becoming civically engaged.”

6 thoughts on “Amid Lawsuits, Texans Brace for New Era of Immigration Laws”