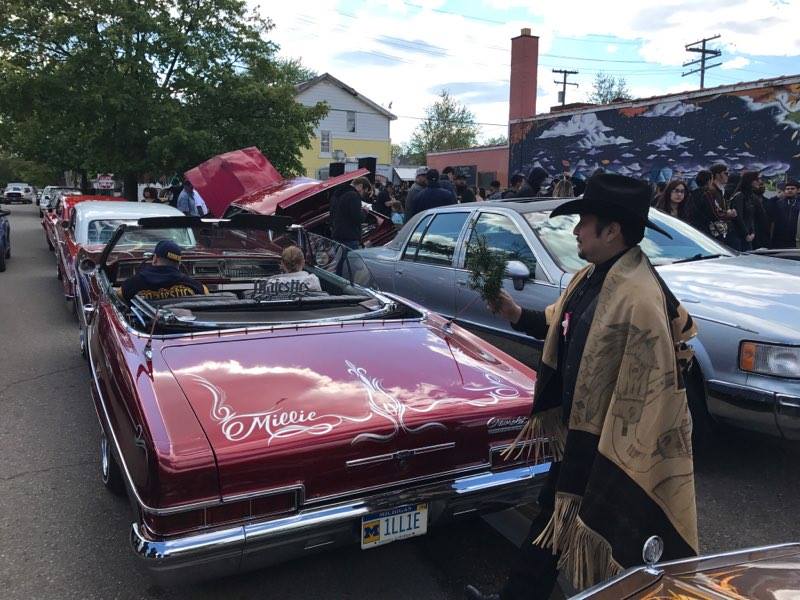 Each year, a family is selected to bless each car on display at the Blessing of the Lowriders event in southwest Detroit (Photo by Serena Maria Daniels)

DETROIT — Spring is a special time of year on Detroit’s Southwest side, known by many as Mexicantown.

It’s a time when Mexican Americans and other Latinos wear their culture proudly, usually starting with a Cinco de Mayo parade along Vernor Highway, the largest such event in Michigan. Large chunks of the main drag are blocked off, as girls in flowing folklórico dresses and young men in mariachi garb make their way down the main drag, while restaurant owners turn their parking lots into makeshift cumbia clubs.

And then, of course, there’s the Blessing of the Lowriders.

“It’s what we know, it’s what we grew up with,” said Anita Gibson, 32, a native of Southwest who brought her nine-year-old Brandon Baylock to the annual event, this year held May 7 outside of the Grace in Action congregation.

On this unusually chilly afternoon, the Blessing of the Lowriders transported spectators to a scene more akin to LA’s balmy Whittier Boulevard back in the day than the modern Midwest. Some 20-odd tricked out Impalas, Caddys and Chevys were all lined up. Off to the corner, a breakdance mat is set up for B-boys. All in attendance arrived to hear from a priest who blesses the cars, the B-boys, the B-girls and the admirers for the start of the new cruising season.

Led by Rev. John Cummings and the Arellano Cruz family, the pastor opened the ceremony with song and a message of acceptance and unity for all who’ve gathered.

“Together, we follow in the mission of Jesus Christ by bringing together people from many different socio-economic, cultural and racial backgrounds in the name of two common passions… well, three really: lowriders, breakdancing and cumbia,” said Cummings, before the Arellano Cruz family began their procession of sprinkling holy water on each custom ride.

It all started back in the 1990s, when the blessing’s founder, Victor Villalobos, noticed the neighborhood kids emulating lowrider culture on their bicycles.

A lowrider bike enthusiast himself, Villalobos found himself compelled to mentor youth. He started a bike club and began thinking of ways for the group to gain acceptance. And as is typical for Villalobos in these moments of contemplation, he prayed on it.

The club would find acceptance, he reasoned, if they were given a proper blessing.

“No one would think we were a gang if we were in a church,” Villalobos told Latino USA.

Despite its standing as the Motor City —birthplace of many of the muscly cars coveted in lowrider culture— it took a while for the scene to hit the Detroit region.

Rather, it was born in the barrios of another car capital, Los Angeles, where starting as early as the 1930s, Chicanos began customizing their cars and loading the trunks with sandbags to give them a lowered effect, according to a 2002 essay in Lowrider Magazine.

In much the same way that the so-called cholo or pachuco look took hold, lowriders —which often depict iconic Chicano imagery painted on the hoods or atop the trunks, chrome hubcaps and lavish interiors reupholstered with crushed velvet— the cars served as a form of rebellion against the mainstream.

Unlike hot rod or muscle car enthusiasts, the objective of the lowrider is not so much horsepower, as it is swagger. On top of the stylish aesthetic, the very movement of the lowrider (the addition of hydraulics to create a distinct bounce) oozes cool.

Along with the cars, lowrider bikes —traditionally Schwinns that are lowered and outfitted with glossy chrome detailing, candy-colored paint jobs and velvety banana seats— began making their way as the luxury ride of choice for the adolescent set.

It wasn’t until around the 1990s that these domestic works of art would find their way back to Motown, when the first lowrider car clubs started setting up chapters in Detroit.

Among the early national car clubs to make their way to Detroit was the Majestics (an outfit that got its start in the LA suburb of Norwalk in 1963)—brought to the area around 14 years ago by Compton, California native Alfonso Hernandez, who moved to the city to be near his wife’s family, who were Michigan natives.

Like other social clubs, the Majestics hold certain distinct rituals: when they gather, they sport blue and yellow lettermen’s jackets, they have a sign and their cars are customized in a style unique to other car clubs.

At Sunday’s event, the crew was among several other clubs who had their rides on display.

“I’ve known since I was a little kid that I liked cars,” says Hernandez. “Other people have hobbies like fishing… We’re just the same, but our hobby is cars.”

These days, lowriders and hot rods alike take the lanes during metro Detroit’s legacy Woodward Dream Cruise – a yearly tradition that attracts car enthusiasts from across the country to the region every summer.

Despite its perception as being tied to gang culture, Detroit’s lowrider scene was born out of creating a safe space for the neighborhood’s youth.

Officially, this year marked the 19th year of the blessing, but after looking at old fliers promoting the first one, Villalobos says it’s actually been since 1996 when he organized the first event at the historic Ste. Anne de Detroit cathedral.

“After that, it just blew up,” Villalobos said.

Back in the 90s, Southwest Detroit, home to the majority of the city’s Mexican American population, was being penetrated by gang violence. Many families fled to neighboring suburbs like Lincoln Park, Melvindale and Southgate—an area that now is sometimes known as Mexicantown 2.0 for its many Mexican eateries and shops.

Now organized by local youth empowerment nonprofit Young Nation in collaboration with Detroit chapters of the USO and GoodTimes car clubs, the blessing has proven the ultimate peacekeeper and anchor for the neighborhood among residents former and present—through prayer, cars, B-boys and B-girls.

One thought on “In Detroit, Lowrider Culture Is a Religion Unto Itself”