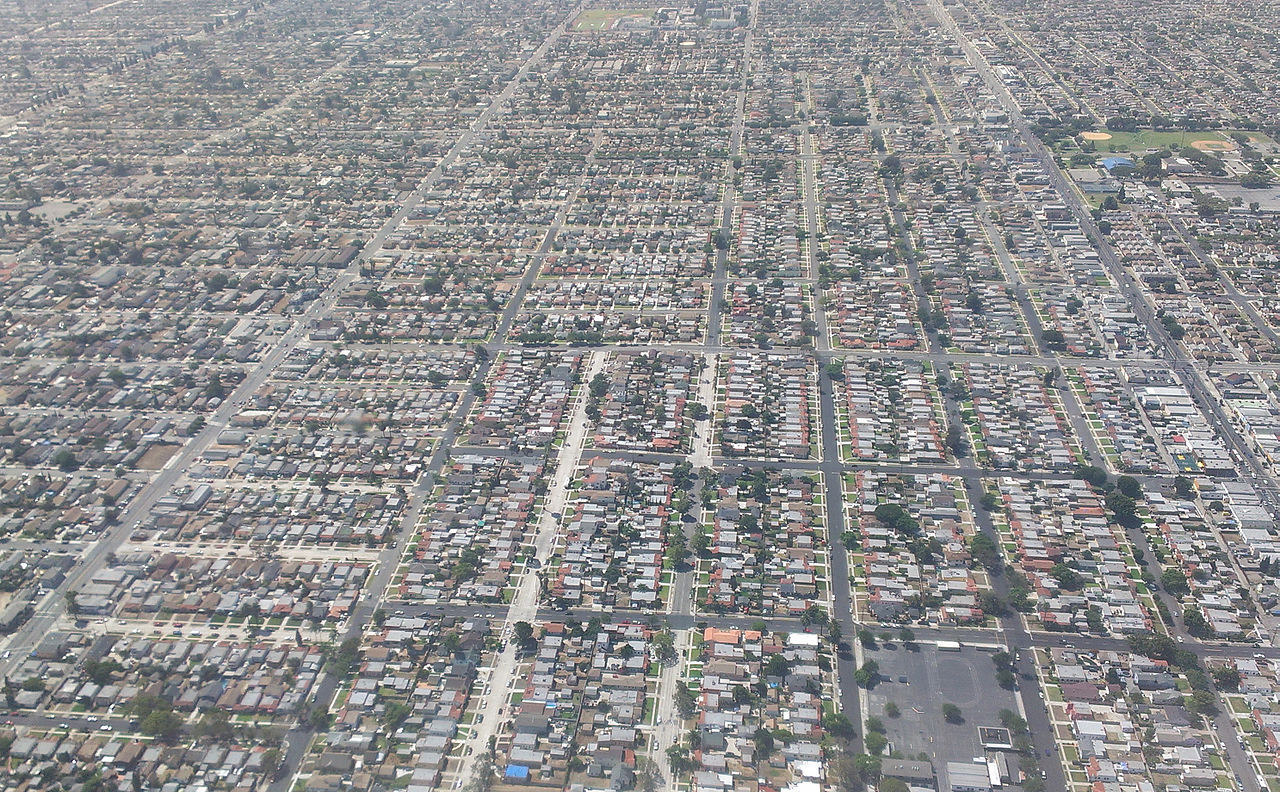 A neighborhood in South Los Angeles. (Photo by Alfred Twu)

The cities of the Americas are unequal places.

Latin America, which is the world’s most unequal place, is also by far the most urbanized region of the globe. More than 80% of its population lives in large cities.

Between 1950 and 2005, the region’s big cities grew precipitously. Both Mexico City and Sao Paulo jumped from just under three million people to, in both cases, nearly 19 million.

Data on urban inequality is largely unavailable, but it is clear that this rapid urbanization has been far from equitable. According to a 2012 UN Habitat report, the large majority of Latin America’s non-poor population lives in major metro areas, while the poorest live in rural areas.

No matter where you live, measuring inequality is tricky, because its incidence and extent changes in different parts of the city.

Sure, there are rich neighborhoods and poor ones: high-income and low-income households sort themselves across cities according to preference (for local public goods and neighborhood composition) and needs (according to budget, job location and housing prices).

But not every neighborhood is comprised fully of households with the same income. Income sorting across space is often “imperfect”, meaning that rich and poor households might live in the same neighborhood and share common social ties and local amenities.

As a result, a very specific and local kind of inequality emerges within neighborhoods. This phenomenon is sizeable in U.S. metro areas, Census Bureau data shows. Not only do unequal households live very close together, but neighborhoods also represent small communities where local inequality, on average, seems to track overall urban inequality.

For example, New York City, Chicago and Los Angeles all have neighborhood income inequality at least 20% larger than Washington D.C.’s, which matches the difference in the cities’ GINI indices. We found that inequality within individual neighborhoods has also been rising precipitously over the past 35 years (even in very small neighborhoods), indicating an increase of income heterogeneity at the community level.

This unexpected finding is likely related to the comeback of North American cities over the past decade: the so-called great inversion. Across the Americas, jobs and firms are moving back into major metro areas, attracting more skilled people, who are generally young, receive higher wages and prefer to settle down where their jobs are.

As high-income young couples buy up homes in historically distressed neighborhoods long dominated by the working and renting class —and gentrify them— they push up income heterogeneity in those places. This is happening in cities across the Americas.

Keeping Up With the Joneses

We wanted to better understand this phenomenon. Why is local income inequality rising? How can we quantify it? What are the trends in uber-localized inequality? And what does it all mean for city dwellers?

Those were the questions driving our study —So close yet so unequal: Reconsidering spatial inequality in U.S. cities— which focused on U.S. cities. Our preliminary findings were recently published in a Catholic University of Milan Working Paper.

Unlike traditional assessments of inequality, which accept administrative partitions of the city as the unit of analysis and measure income inequality in those neighborhoods, we look at inequality among neighbors, putting people at the centre of our analysis.

The underlying thought experiment consists of asking individuals to compare their income with that of neighbors living within a given distance range (from few blocks to entire census areas), thus quantifying income inequality in that particular person’s neighborhood.

We found that these two indices define a typology of cities that mirrors what urban planners have found at the city level. Some places are “even cities”. Like Washington, D.C., they display relatively low-income inequality everywhere.

Other metro areas, among them Miami and San Francisco, show high urban inequality, but high and low-income households are rather evenly distributed throughout the city. These are so-called “mixed cities.”

The largest U.S. metro areas also have the most unequal neighborhoods. In New York and Los Angeles, the way high and low-income households are distributed across the urban footprint reflects what planners call the “unstable city” model.

The Great Gatsby in the ‘Hood

Such substantial and increasing inequality appears to imply several contradictory things for cities and their residents.

As shown in Figure 1, lower neighborhood inequality is associated, on average, with large upward mobility gains for young people who grew up in poor families, a phenomenon reported in recent work by Stanford University’s Raj Chetty.

Children of better-off families benefit, too, from living in a homogenous local community, thanks to “positive contagion” facilitated by social interaction among wealthy young peers.

Both findings are evidence of a “Great Gatsby Curve” in America’s neighborhoods. That is, greater income inequality in one generation amplifies the consequences of having rich or poor parents for the economic status of the next generation.

Yet greater income inequality within individual neighborhoods may actually be a good thing for poorer locals. Figure 2 shows that they experience life expectancy gains, perhaps due to positive health modeling and increased aspirations among poor adult residents.

For policy makers, then, our findings create an intergenerational trade-off. A “mixed city” model would seem to promote life expectancy gains for poor adults who live there, while the “even city” ideal furthers economic mobility of young people who grow up poor.

Lessons learned from such a policy debate in the U.S. could have important international consequences.

No one has yet applied our neighborhood-based inequality analysis to Latin America’s unequal cities. But we can see that in metropolises such as Mexico City, and São Paulo in Brazil, as well as in smaller cities, uncontrolled sprawl and lack of urban planning has increased the distances between high, middle and low-income households.

This is the “polarized city” model, and our paper found little evidence of it in U.S. cities (with the exception of Detroit and Washington, D.C.). Such places have substantial heterogeneity in income across neighborhoods and relatively little heterogeneity within neighborhoods.

In Latin America’s polarized cities, the poor are separated from the rest of the population. As a result, they have lower access and opportunities for education, employment and services. This inequality has been exacerbated by gentrification and by the region’s growing global economic engagement. This has strengthened urban elites’ connections to the world while relegating Latin America’s poor further into the periphery.

In such cases, increasing the urban income mix seen in New York City might actually have beneficial effects for the city’s neediest residents. This is a relevant area for future study. It would be interesting, for example, to plot cities across the Americas on the same graph, examining regional trends in longevity and mobility based on neighborhood-level inequality.

Such hyper-local analysis would offer both policymakers and international agencies the kind of information they need to improve the lives of today’s city dwellers, both now and in the future.