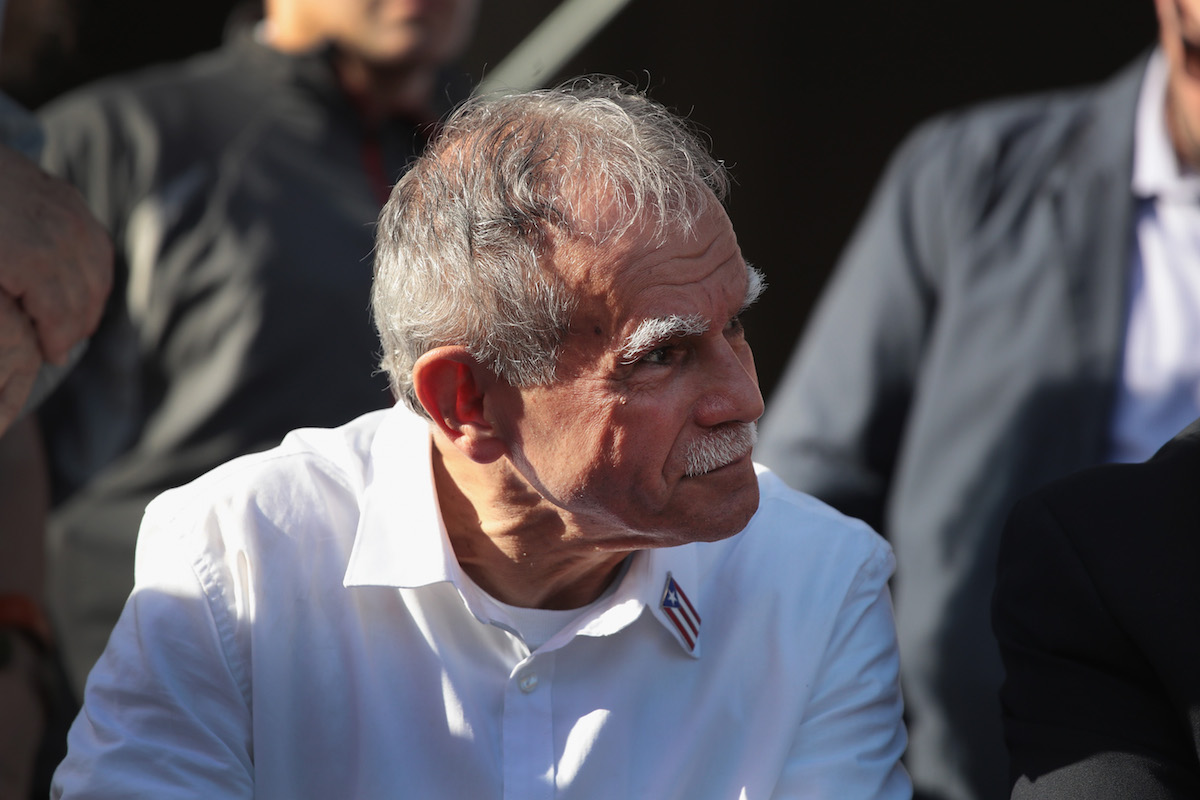 Puerto Rican nationalist Oscar López Rivera listens to speakers during a rally held in his honor on May 18, 2017 in Chicago, Illinois. (Photo by Scott Olson/Getty Images)

In an op-ed published Thursday by the New York Daily News, Oscar López Rivera indicated that he will not be honored as a National Freedom Honor at the 2017 National Puerto Rican Day Parade in New York City.

“I will be on Fifth Ave. not as your honoree,” López Rivera wrote, “but as a humble Puerto Rican and grandfather who at 74 continues to be committed to helping raise awareness about the fiscal, health care and human rights crisis Puerto Rico is facing at this historic juncture.”

Several sponsors, politicians and law enforcement organizations had pulled out of the this year’s parade, which planned to honor López Rivera as a National Freedom Hero. Critics believed that the 74-year-old Rivera’s association with the pro-independence FALN during the 1970s (responsible for setting off more than 70 bombs in American cities) meant that the parade was honoring a terrorist. Earlier this year, López Rivera’s sentence for seditious conspiracy was commuted by President Obama. Latino USA recently dedicated an hour to reporting about López Rivera and his federal case.

“This parade is happening at a time when Puerto Rico is facing a political and economic crisis that is impacting everyone on the island,” López Rivera wrote in the Daily News. “Unfortunately, the narrative around the Parade is not celebration and concern for the situation on the island but rather misinformation about who I am and what I stand for.”

At one point in his piece, López Rivera called for change in narrative.

“We must shift the focus. We cannot let people who are unfamiliar with Puerto Rican history define the narrative and experiences of our community,” he explained. “I want to repeat what I have said in many interviews, both in prison and since my release. I personally, and we as a community have transcended violence — it’s crucial for people to understand that we’re not advocating anything that would be a threat to anyone.”

And one week after López Rivera went on Puerto Rican radio to say that “no Puerto Rican should submit to the wishes of a corporation” and two weeks after he called for a boycott against Goya, the first sponsor to drop out of the parade, his Thursday Daily News op-ed explained that instead of him being honored, others should be honored, including “the many companies that though not showing a float on June 11th have continued to support our future through scholarship funds.”

On Friday morning, a copy of the letter López Rivera sent to parade board chair Lorraine Cortés-Vázquez (incorrectly named as Vázquez Cortés in the following letter) and the rest of the parade board —reiterating the Daily News op-ed— started making the rounds with his supporters on social media: After López Rivera’s op-ed became public, the National Puerto Rican Day Parade’s Board of Director issued the following statement: “We are looking forward to marching with Oscar López Rivera and respect his decision to walk up Fifth Avenue, ‘not as an honoree but as a humble Puerto Rican and grandfather.’ Now we can focus again on important issues and the plight of Puerto Rico.”

“The parade has always been about Puerto Rico and Puerto Ricans, not any one participant. It is a celebration of a culture and community at the center of what makes New York City great. Unfortunately, the parade and the plight of Puerto Rico have been overshadowed by needless controversy. Oscar Lopez Rivera agreeing to step aside from any formal role in the parade is a critical step forward in refocusing our city’s attention on the more important issues facing Puerto Rico. Puerto Rico and its 3.5 million people, many of whom are family and loved ones of New Yorkers, are in the midst of an economic collapse and health care crisis that threatens their future. Our fellow Americans in Puerto Rico deserve help from Washington and they are not receiving it. This should be our singular focus when it comes to Puerto Rico and our city’s parade.”

New York City Council Speaker Melissa Mark-Viverito, one of López Rivera’s most vocal supporters, said in a statement that “Oscar López Rivera was pardoned by President Obama was never convicted of a violent crime and is one of dozens of honorees being recognized at the Puerto Rican Day Parade.” Previously, Mark-Viverito explained that the push against López Rivera and the parade was the result of “an ultra-right wing element” in Puerto Rico that favors statehood for the island. (June 11, the day of the parade, is the same day a status plebiscite is happening in Puerto Rico.)

News of López Rivera’s decision on Thursday to not be an honoree was celebrated by many of the online pro-statehood Puerto Ricans who have been mounting a campaign against parade sponsors since early May:

“Oscar López Rivera certainly doesn’t need any organization, politician or corporation to acknowledge what is obvious to those who respect him and honor his sacrifice to the Puerto Rican people and nation,” said activist David Galarza Santa. “We will proudly march with him and we will decide who our heroes will be. That said, if indeed it is Oscar’s selfless and noble desire to step aside so that the real issues afflicting Puerto Rico —like the Junta [Fiscal Control Board] and colonialism— get the attention they deserve, then the politicos and their consultants should follow his lead and step down from the parade board and any other position of influence and return the parade to the community. They’ve played a greater role in distracting us from the real issues and diverting the parade from its original mission.”

“There are two books of [Oscar’s] own writing and this doesn’t strike me as terribly different from either of them,” acclaimed Puerto Rican writer and activist Rich Villar said. “I wouldn’t be surprised if it was in concert with his supporters at the parade. In any case, I don’t think an official honor, or a parade sash, compares in his mind to the honor of having served 35 years in prison on behalf of his homeland. Or, for that matter, the honor given him by his supporters and by like-minded Boricuas.”

Latino USA has also contacted López Rivera’s attorney about the Daily News op-ed. As of this posting, Latino USA has yet to receive a response.

Last week, Cortés-Vázquez had agreed to speak with Latino USA.