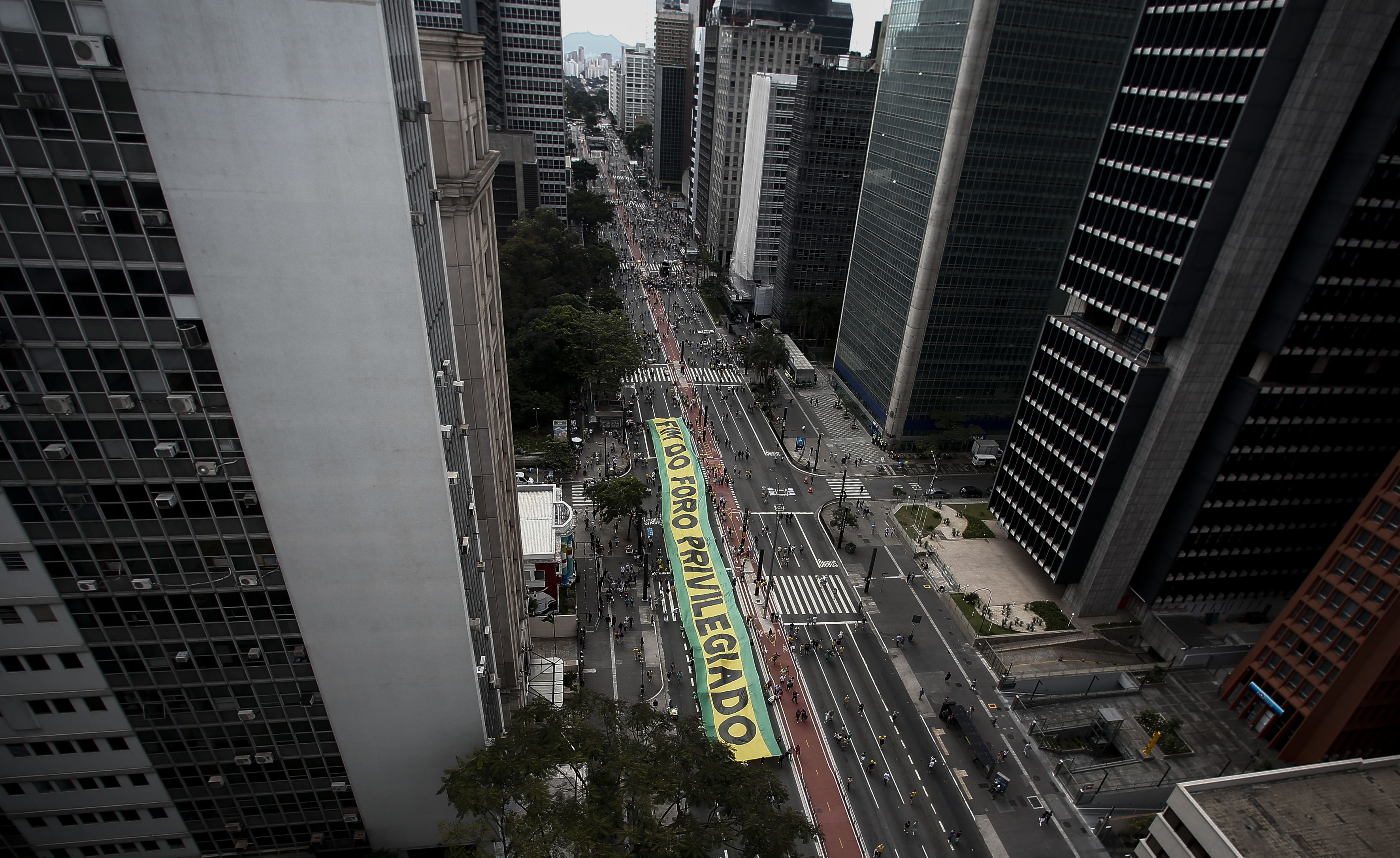 Tape recordings of Brazilian President Michel Temer and Senator Aecio Neves allegedly encouraging the bribing of public officials released in May confirm what already seemed fairly clear: the country is immersed in the worst crisis of its post-1988 democratic history.

Not so long ago, Brazil was being praised as a responsible rising power; a model for other developing nations in its winning fight against hunger and poverty.

In November 2009, The Economist magazine announced that Brazil was “taking off.” But by February 2015, the same British magazine was calling the country a “quagmire.”

Today, people are demanding the president’s ouster and new direct general elections. How did Brazil get here?

It would take tomes to explain Brazil’s fall in full, but here’s a whirlwind summary.

First, there’s the clear problem of money in politics. President Temer and Senator Aecio Neves, once a rising political star, are only the latest politicians to succumb in the current corruption scandal.

Of the 594 congressional representatives and senators elected in 2014, 318 have been investigated for wrongdoing under the so-called Lava Jato (Carwash) probe. Many for their liaisons with businesses such as the Oderbrecht construction company and JBS, a meatpacking firm.

The spate of investigations and arrests is a sign that political watchdog agencies, such as the public ministry, attorney general’s office and the federal police are better equipped today than in the past. These institutions gained considerable autonomy and capacity under the successive Workers’ Party (PT, in its Portuguese acronym) governments of Lula da Silva and Rousseff.

But there’s still room for improvement.

These institutions have also repeatedly used unlawful and unconstitutional measures that increasingly impinge on the rights of citizens, journalists and bloggers.

Nor has the media been a neutral agent in this process. Citing freedom of expression, major national newspapers, magazines and television channels have leaked judicial operations and publicly condemned politicians before the due process of law.

Recently, leaked material suggested that Reinaldo Azevedo, a conservative journalist who had recently become a ferocious critic of the judicial investigations, was actually involved with its key actors.

The courts aren’t helping things by moving very slowly in some cases (mostly when bringing cases against politicians on the right) and extremely fast in others (when taking down PT officials). It took the Supreme Court more than four months to decide on Eduardo Cunha’s ouster, but less that 24 hours to prevent Lula from being appointed minister under then-president Rousseff.

That may just be coincidence, but people will be closely watching the pace of justice as corruption cases against President Temer (PMDB) and Senator Neves (PSDB) advance.

There is an international component to this crisis, too.

In a new paper in International Affairs co-authored with Leticia Pinheiro and Maria Regina Soares de Lima, we argue that Brazil’s rapid transition from rising star to basket case represents a classic case of the “graduation dilemma.”

The concept of graduation has been used variously, often in reference to Asia’s emerging economies, to denote a step forward in a country’s economic status. This latter is generally based on exogenous criteria defined by the World Bank or International Monetary Fund.

Once “graduated,” development economists posit, a country can no longer benefit from advantageous packages in trade, finance and development aid. This is one reason why emerging nations often fear, and seek to avoid, the graduation label.

Examining Brazil’s current quandary, we propose a different view. We argue that graduation is not a result but a process—one that requires making difficult foreign policy decisions that interact, in sometimes complicated ways, with domestic politics.

In this conception, Brazil and other second-tier non-nuclear powers face a graduation dilemma whenever their decision makers find themselves compelled to choose between two different international strategies. That choice is between a more autonomous type of development or a more dependency-based foreign policy. Security experts would call this “balancing” versus “bandwagoning.”

Since Brazil’s emergence onto the world stage two decades ago, its main choice has been whether to continue traditional North-South alliances or emphasize innovative coalitions, such as the IBSA Forum (India, Brazil and South Africa) and the BRICS grouping, which throws Russia and China into the mix.

The dilemma arises because foreign policy strategies often pit international interests against domestic concerns. Brazil’s national crisis, for example, will affect strategic international decisions. Among them are the exploitation of the country’s oil-rich pre-salt layer and Amazon rainforest protection.

Graduating, But to Where?

Each route has costs. In a country with still-pressing health, education and infrastructure needs, Workers’ Party leaders had to justify leading the UN’s peacekeeping mission in Haiti (a policy since 2004) and giving generous aid to Portuguese-speaking Guinea-Bissau. Constituents reasonably enough asked whether such South-South cooperation makes sense for a developing nation such as Brazil.

Foreign policy decisions can also cause ideological clashes. In 2013, Rousseff’s program to bring in Cuban, Portuguese and Spanish doctors to help treat the country’s under-served rural population provoked a social and political backlash.

Opposition leaders accused Rousseff of getting too close to the Cuba-inspired ALBA nations (Venezuela, Ecuador and Bolivia), while Brazil’s medical establishment reacted belligerently. But neither group presented a better solution for the public health problem.

Explaining such South-South cooperation to a domestic audience accustomed to engaging with the West proved difficult for the PT. But switching gears implies trade-offs too.

Today, facing austerity and budget shortfalls, Temer’s decision makers are choosing a more market-oriented development trajectory, turning away from the South and toward the US.

This new (but familiar) foreign policy is more easily justified to Brazilian elites and less lambasted in the media. But dependency on rich countries and international financial institutions will limit Brazil’s economic and political autonomy.

Historically, North-South cooperation has also allowed elites to avoid dealing with high levels of local inequality. In 1981, Brazil’s wealth distribution was the world’s worst. That improved substantially under the PT, but a return to neoliberalism under Temer may endanger progress and exacerbate citizen discontent.

For an emerging nation to officially “graduate”, cohesion between government and its strategic partners in business, trade unions, the media, academia and civil society is a must. Brazil’s current institutional crisis has revealed not only the typical left-right divide but also deep fractures within the right.

Government and business elites may lack a shared vision for the future but people on the streets know exactly what they want to “graduate” to: snap elections to restore democracy, the rule of law, social development and human rights.