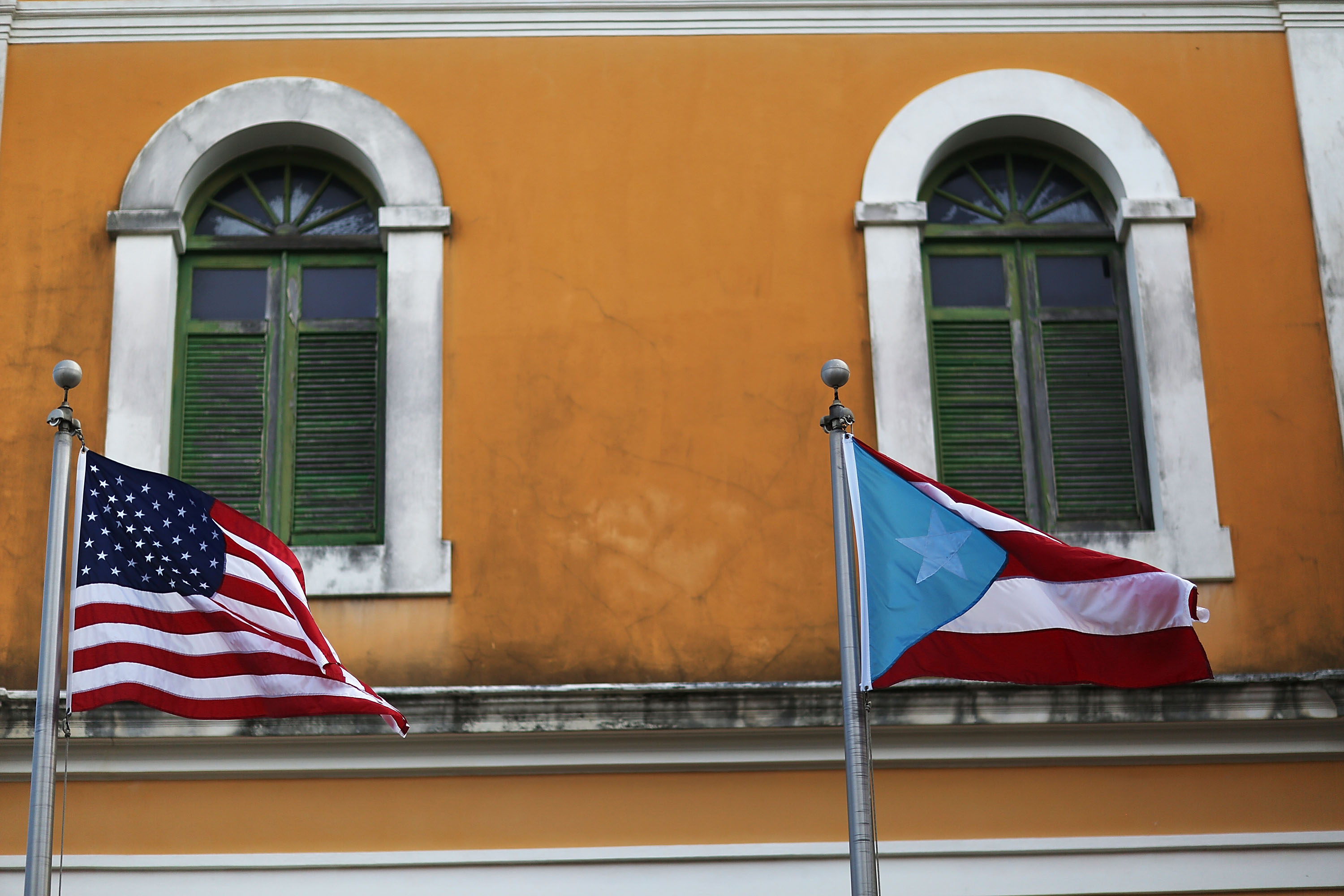 An American flag and Puerto Rican flag fly next to each other in San Juan, Puerto Rico. (Photo by Joe Raedle/Getty Images)

The upcoming June 11 plebiscite status vote in Puerto Rico has been a strain on the island’s statehood leaders, who have pushed it through by the short hairs, independent of Congress and the Department of Justice, and against many who argue that the timing is not right.

Governor Ricardo Rosselló, the leader of Puerto Rico’s pro-statehood New Progressive Party (PNP), started the uphill battle soon after he was elected last November. The promise of a quick resolution of the island’s political future and a move toward statehood was at the heart of Rossello’s campaign—his silver bullet.

Now is the time.

But is statehood the silver bullet, especially when Puerto Rico is teetering at the edge of an economic abyss and confronts the unsympathetic administration of President Donald Trump?

“When is the right time to throw yourself from the boat?” said Antonio Sagardia, ex-Secretary of Justice of the administration of former governor Luis Fortuño. “When the boat is filling with water, about to go under. That is the right time. The United States doesn’t know what to do with Puerto Rico, so we have to do it ourselves.”

Puerto Rico is suffering the worst economic and fiscal crisis of its history, brought about by a massive $70 billion debt, which prompted the establishment of a fiscal control board, and a looming budget gap of more than $20 billion. In addition, more than 12 percent unemployment has fueled a population decline that exceeds the 1950’s Great Migration, stripping the island of its human capital.

Supporters of other territorial options –complete independence from the U.S. and the island’s current commonwealth status— have already said they will not participate in the June 11 vote, raising issues about low voter turnout and a result that will not truly reflect Puerto Rico’s voting population (estimated to be between 2.8 million and 2.1 million). On an island known for extremely high voter turnouts, the June 11 plebiscite would be a “success” if it got 30 percent turnout.

“The time will never be perfect. You have to move the ball forward,” said Ken Oliver, director of MCR Latino and expert in Puerto Rican politics.  “No territory has ever become a state waiting for the ‘federales.’ You have to take risks, even when it is heavy lifting.”

Nonetheless, doubt lingers about the June 11 vote. Since 1967, the island has endured four plebiscites, and none have amounted to any definitive action by the United States. Many expect this fifth plebiscite to go the same way.

In addition, the campaign waged by Rosselló and statehood proponents has been misleading, to say the least.

They insist on portraying the vote as the golden ticket to a magical kingdom and have failed to inform the Puerto Rican people that it is more than likely an exercise in futility, mostly because they decided to jump the gun, amidst a power struggle between the three of Puerto Rico’s statehood leaders: Resident Commissioner Jenniffer González (a non-voting Republican member of Congress), Rosselló (a Democrat) and Senate President Thomas Rivera Schatz (a Republican).

The Department of Justice (DOJ) never approved the language of the June vote and any federal dollars slated for this plebiscite never materialized, leading the Rosselló government to spend more than $5 million of local money in the middle of a debt crisis. And as of this writing, the Puerto Rican government has received no guarantee that Congress will honor the results of the voting.

Nevertheless, Rosselló and his administration have soldiered on.

As Hillary Clinton’s campaign advisor in Puerto Rico, Jeffrey Fallow, concluded: “It is not a great time, but people have to try. They are setting a marker, and that is important.”

So is this time for the silver bullet?

“Puerto Rico’s unequal status is both the main cause of our economic and fiscal crisis and the main reason we cannot overcome the crisis without having to implore Congress for help,” said Pedro Pierluisi, Puerto Rico’s former Resident Commissioner for Fortuño’s administration.

In order to overcome this crossroads in the island’s history, “Puerto Rico must become a state, or a sovereign nation, which let me underscore, are the only two possible alternatives to the territory status,” Pierluisi said. “We must be first-class citizens in this nation, or we must be first class-citizens in our own nation.”

Yet from all indications, the cavalry is not coming. They has not even saddled up. In fact, they are totally ignoring the party. It seems history is not on the side of Rosselló and his allies.

In a recent press conference, the 38-year-old governor laid bare his frustration: “I am appalled that any process that is a democratic process would be considered a political exercise. It doesn’t matter where it stems from, if it stems from the people or if it stems from the U.S. citizens that reside in Puerto Rico—it is a valid process. So we can never accept any premise, whereby someone will try to diminish the process for secondary considerations.”

But the problem is this: Rosselló and his supporters continue to peddled a misconception, a scenario that promises the Puerto Rican people that statehood is indeed a possibility and that, once achieved, it will cure all that ails the island.

What is the motivation to keep selling this lie—that the Americans are actually involved and invested in the transformation of Puerto Rico from a colony to a spanking new state of the union?

Statehood proponents won’t say why. They continue to hope that someone, anyone, will listen to them and act, even though inaction is still the same flavor of the day.

Susanne Ramirez de Arellano is a Puerto Rican freelance writer based in New York City. She is a former News Director for Univision Puerto Rico and has worked for ABC News, the Associated Press Television News in London and CNN International. She currently writes for NBC Latino, among other media outlets. She tweets from @DurgaOne.

2 thoughts on “OPINION: With Another Plebiscite in Puerto Rico, Statehood Leaders Hope for the Impossible”