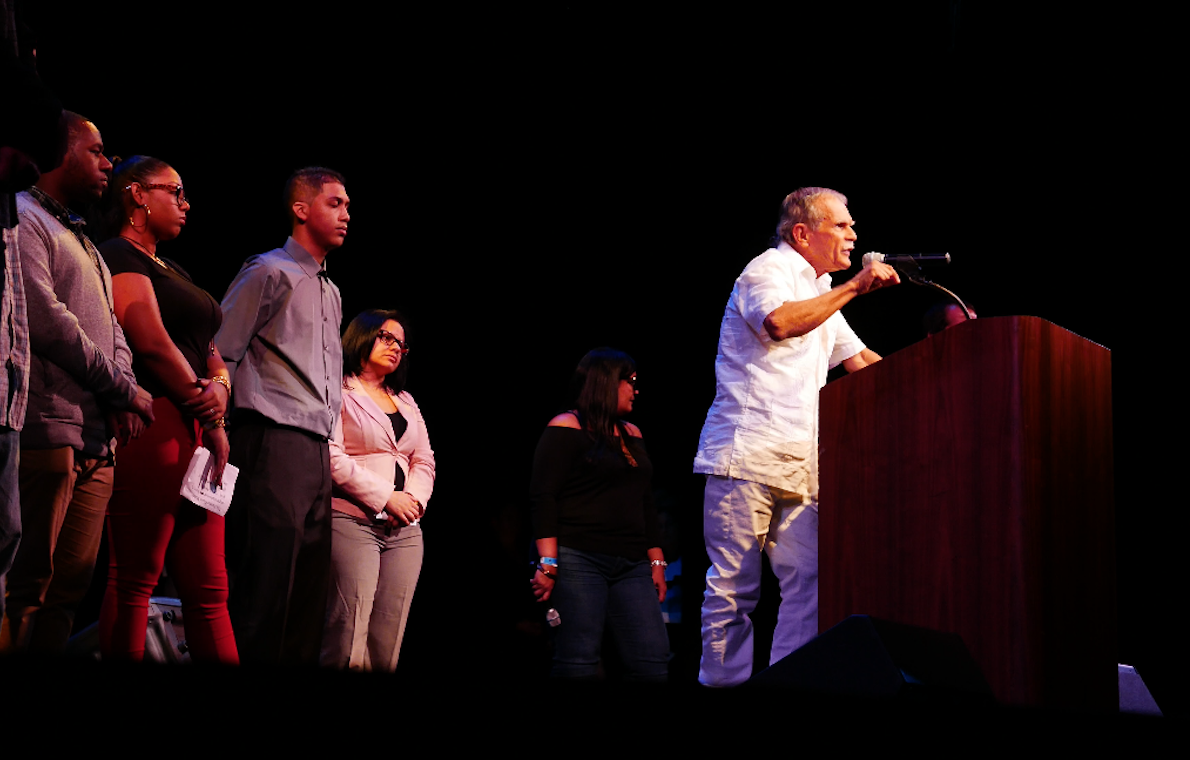 Hundreds of people packed the Hostos College auditorium in the Bronx on June 8 to receive Oscar López Rivera, the controversial former militant who fought for Puerto Rican independence and who was imprisoned for 36 years in connection with a bombing campaign in Chicago. The event was billed as an “NYC Victory Celebration”—a chance for his supporters in New York to welcome Oscar home.

“Puerto Ricans, wake up is time to fight,” Sterling sang in Spanish, causing many in the audience who were already standing to rise up their fists.

The night was filled with poems, folkloric music and dance performances. Just one man peacefully protested the gathering. He yelled “no more terrorism” and mentioned the 1975 Fraunces Tavern attack in New York City, an FALN-orchestrated bombing that killed four people. The man was subsequently escorted out of the event.

But the crowd remained anxiously waiting to hear from the honoree of the night: Oscar López Rivera.

López Rivera was joined by four bodyguards and five students from Hostos College, who stood behind him.

Heroes welcome for Oscar Lopez Rivera in the #Bronx
He's sitting in the sixth row in the auditorium pic.twitter.com/R8jwKlS4CZ

“People that fight for independence are only a minority, but the vast majority of Puerto Ricans want to be Puerto Ricans. We love Puerto Rico,” said López Rivera. “We are willing to do everything we can do to make Puerto Rico the nation it has the potential to be.”

During many parts of his speech, audience members waved their light blue, white and red Puerto Rican mini flags. These are the colors of Puerto Rico’s original flag before the island adopted a darker shade of blue similar to the United States flag. This happened several years after the Puerto Rico became a U.S. territory in 1898.

“Love for Puerto Rico does not cost anything. What would be costly is if we lose Puerto Rico,” said López Rivera. “We won’t have the place I consider to be our promise land, the land that every single Puerto Rican in the diaspora can go to and say: This is my land.”

Although the main theme of his speech was unity for Puerto Rico, López Rivera didn’t shy away from addressing the controversy behind the National Puerto Rican Day Parade (NPRDP).

“I want to express my profound gratitude for one main reason: It did not succumb. It did not run away from the challenge,” López Rivera said about the NPRDP board. “It did not allow certain corporations to blackmail them.”

Before ending his speech, López Rivera made sure to take time to address an issue that Puerto Ricans care about regardless of political views: Puerto Rico’s territorial status.

“We need to create a space where all Puerto Ricans who love Puerto Rico can come together, transcend their differences just with one purpose: To decolonize Puerto Rico,” he said towards the end of his speech.