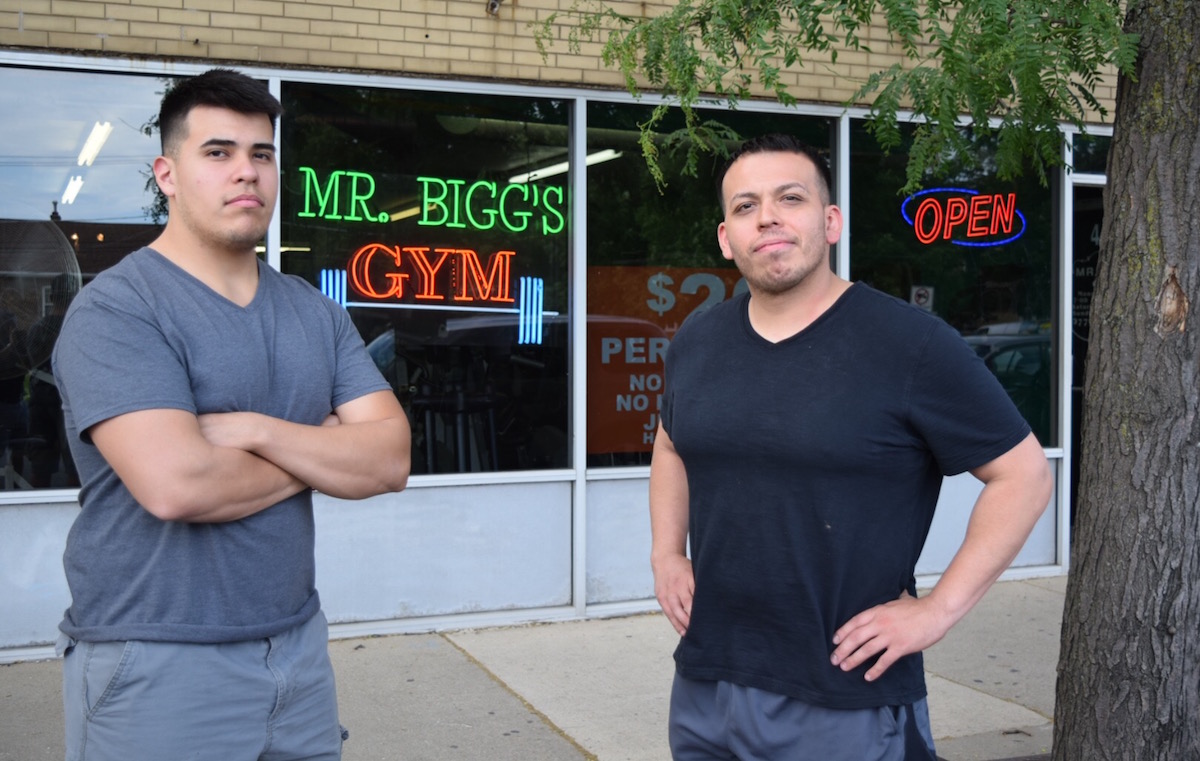 Joel (left) and Lee Campuzano in front of the Southwest side Chicago neighborhood gym their father opened 17 years ago and where they work today. (Ray Salazar)

CHICAGO — A giant tree rises in the sidewalk near 63rd and Pulaski on Chicago’s Southwest side. The roots flex through the concrete and the metal grate intended to protect the tree as it grew. The tree’s thick branches, like giant forearms, reach out as if posing like a proud bodybuilder in front of Mr. Bigg’s Gym.

Joel says, “Sometimes I see my dad leaning toward not wanting to have anything to do with the gym anymore. It’s still his love and his passion. I just see him tired. We’re young and we have a responsibility to take over the dream that he once had. That’s something we continue to fight for because we still have something that other gyms don’t have: the family type of feeling.”

Lee remembers, “We used to drive up and down 63rd Street. He would say, ‘I’m gonna buy that place.’ Or he would say, ‘I think my gym would look good there.’”

“That’s the Spot Right There”

The family sold their Southwest side home and moved from apartment to apartment —the father, mother, and four sons— until Campuzano decided if he was going to buy a home or a building to open his gym. Lee recalls, “I remember the day he said, ‘That’s the spot right there—that place that’s for sale.’” The Campuzano family moved into the apartment above the storefront.

The gym started out with about 15 pieces of equipment. The first week it opened, Campuzano put a sign outside offering free membership so people would come in. Campuzano explains in Spanish, “Like all new businesses, I started from the bottom. Few people came at first. Three to four years later, we had more people.”

A few years ago, Campuzano decided to expand the storefront and built over the backyard so it’s now about 2,000 square feet. Today, the gym has nautilus machines, cardio equipment, dumbbells, a squat rack, a cable machine and two bathrooms: one for men, one for women.

Membership picked up after the difficult early years. At its highest, the gym, which charges $20 a month and has no long-term commitments, had 150 members. Today, they have about 80. “When all the big-chain gyms [whose memberships start at $10 a month] opened around here, I told my sons, ‘This is going to be the time we close the gym,’” Campuzano recalls. But the gym is still open seven days a week.

The father started weightlifting when he arrived in the U.S. from Mexico at 17 years old. He says that as a kid in Mexico he watched movies with bodybuilder Jorge Rivero. He would ask people how someone gets a look like that. “With weights,” people told him. So as Campuzano started working for a better life here, he started to lift weights at a gym. After some time and dedication, in three years, he went from weighing 135 pounds to 170. Today, he looks at least 10 years younger than he is.

He and his wife started a family in Humboldt Park, now a popular North side Chicago neighborhood fighting against and losing to gentrification. In the early 1990s, Campuzano knew that the neighborhood plagued with gangs would not be good for his sons.

So he moved to a working-class neighborhood on the city’s Southwest side in 1993. He looked for a gym—this was before LA Fitness or Charter or Blast or any big chain opened in this part of the city. He eventually found a small gym but he quickly realized that “the people at the gym didn’t look kindly on the Latinos who went there.” This is where he got the idea to open his own gym.

Joel says he remembers his dad like Hercules or the Hulk. “He was always physical,” Joel explains. “He would come up to me as a little kid and flex his bicep and slap it and say, ‘Papas,’ potatoes.”

But neither Lee or Joel got into weightlifting early on. Both sons, the younger of the four sons, were overweight as teens. At 18, Lee weighed 206 pounds. None of it was muscle. Joel weighed 227 as a sophomore in high school.

Campuzano says, “I fought with Joel a lot about food. He asked me to go to the movies a lot. He liked eating stuff that wasn’t good for him. I would tell that I needed him to work out and lose weight. He didn’t want to.”

Lee understands that if his father gave them hard time about food, he didn’t have bad intentions. “I know he didn’t mean it in a bad way. He’d tell you stuff. He’d call you ‘Porky.’ Or you’d eat a burger and he would say something.”

His defense mechanism? Show his father he could eat even more. “If that burger’s going to make me fat, then I’m gonna show him I can eat two burgers!”

But when he went to college, Lee started working out.

“I noticed at school there were weight training classes, nutrition classes, aerobic classes,” Lee explains. “It’s almost like it was meant to be. My dad was opening the gym. I would come here. I didn’t know what I was doing. I started taking classes to help myself. It wasn’t until I started helping people around me, and not on a training basis, just showing people, I knew I had a knack for talking and listening and showing people.”

Joel started working out as a teenager after he saw his brother sticking to a workout routine. “I remember my brother showing me a workout in a Flex Magazine. I did the workout day by day. After a month or two, I told him I was ready for the next one. He gave me another one and helped me with my food. He gave me a meal plan I could follow. That’s what stuck with me. What most clients need is the ‘how.’”

Today, Lee works at the gym Monday through Friday for 40-50 hours a week. Joel is there after he leaves for 20-25 hours a week. Campuzano, who still works as a welder during the day, works at the gym a couple of hours each night on weekdays. He’s also there Saturdays, with his sons sometimes, and three hours Sundays by himself.

All of them admit: Mr. Bigg’s Gym has struggled to hold on to members after the big gyms opened up a few years ago.

According to a recent IBIS World report, the big-chain gyms create stiff competition small gyms, as they did for the storefront gyms designed for women.

To help promote their gym this spring, Joel organized a bench-press contest. Four guys competed. A lot of guys talked about it afterwards. In the past, the brothers also organized a 90-day transformation challenge, which created a lot of buzz in the gym and brought in some new members.

The other trend working against the Campuzano’s gym is the new fad in exercise: boutique studio gyms. A Chicago Tribune story highlighted their popularity with cycling, yoga, Crossfit because of “group workouts that take the guesswork out of exercising and provide a greater sense of community.”

Campuzano says, “A few people have left our gym to go to the big gyms but they came back and tell us that this is a better place to work out. They like the ambiente.”

Lee recognizes that as the gym enters its 17th year, “We’re coming into a crucial time—crucial because of technology. The city seems to be changing as well.”

Lee knows that “off the bat, 60-70% of people aren’t going to stick with an exercise program. So our job is teaching people that this isn’t a quick fix.”

And they realize the work their father put into fulfilling his dream.

Lee says, “I’ve always loved and respected my father. The work has brought us a lot closer. There was a time when I would always train with him. If we didn’t have this gym, I probably wouldn’t have the same closeness I have with him.”

Mr. Campuzano hopes to retire—but he says he’ll keep lifting weights “until I have the strength to do it.”

Joel continues to be grateful for his father, his brother and for being able to live above a gym. “We all come to a point of self-realization and we have to figure out what we want in life,” Joel reflects. “I think this is pretty much what I want.”