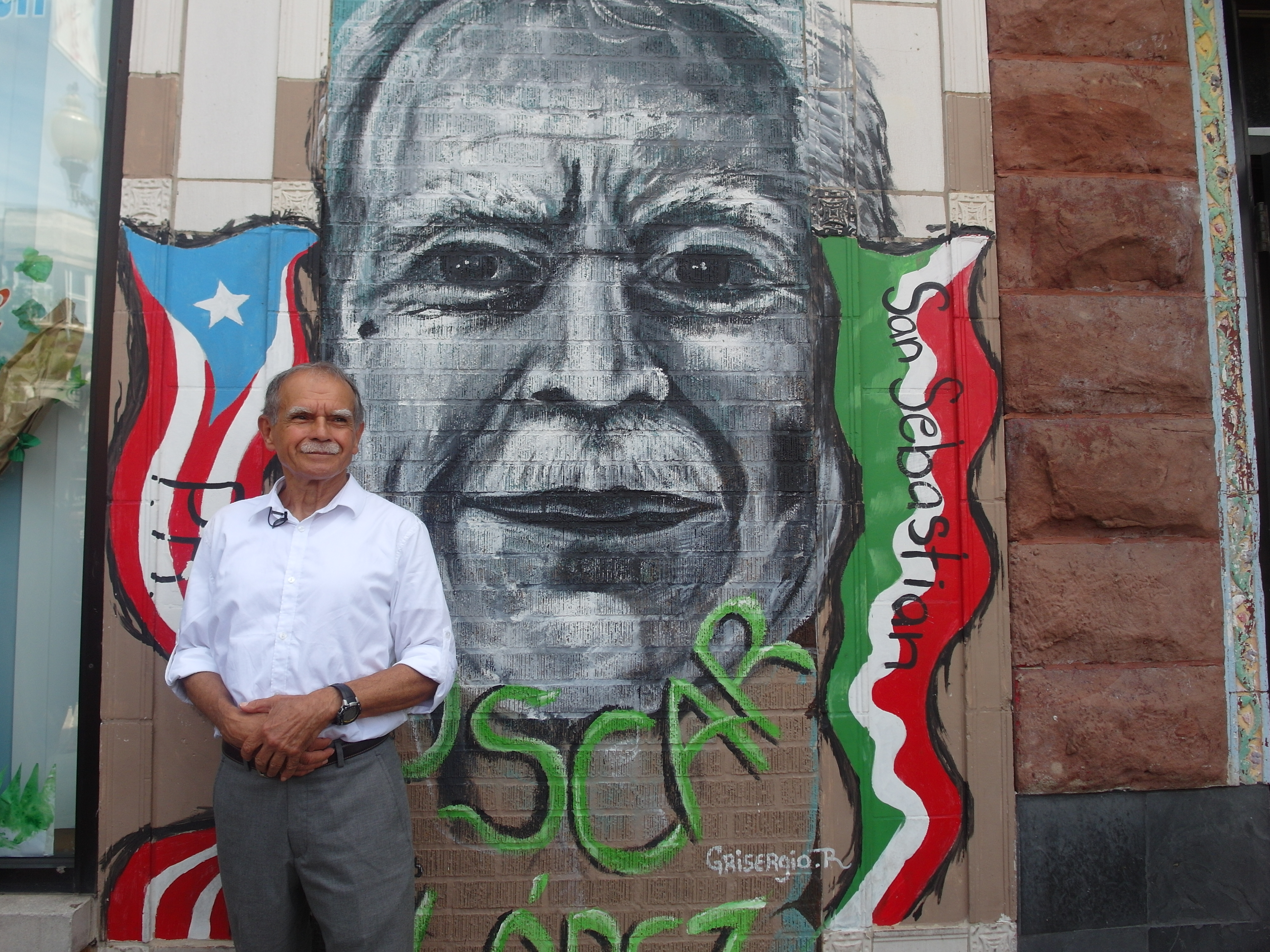 Oscar Lopez Rivera stands in front of a mural of his likeness, located next to Dr. Pedro Albizu Campos High School during a walking tour of Paseo Boricua in Chicago, June 15, 2017. (Serena Maria Daniels)

CHICAGO — Oscar López Rivera’s footprint can be felt on just about every intersection of Paseo Boricua, the section of Division Street on Chicago’s west side bookmarked by two 59-foot-tall Puerto Rican flags.

Just two days before the city’s annual Puerto Rican People’s Parade, the former self-proclaimed political prisoner —who only a month earlier had been released from prison after serving 35 years before his sentence was commuted by President Barack Obama in January— was led on a walking tour to show him just how his legacy has influenced the city’s Puerto Rican diaspora.

His presence was palpable.

Socialist newsletters and Spanish-language weeklies had his photo plastered on the covers, motorists with giant Puerto Rican flags affixed to their cars stopped to gaze at the larger-than-life figure, while students posed next to him and the large mural prominently featured next to Dr. Pedro Albizu Campos Puerto Rican High School, the alternative school co-founded by Lopez Rivera in 1972 as La Escuelita Puertorriqueña in the basement of a church.

As the entourage made its way down the paseo, residents young and old were eager to shake the hand of the man who many credit as responsible for the longevity of Chicago’s Puerto Rican community.

“That’s the man right there. He’s a man that I learned about from a very young age. He’s had a huge impact here,” said Marcelo Tanon, 22, whose father owns La Burquena restaurant and whose mother is a Spanish teacher at La Escuelita.

Following the media tour, López Rivera served as the grand marshal of the neighborhood’s Puerto Rican People’s Parade on a sweltering Saturday afternoon, where thousands of Chicagoans braved the stifling humidity to give the 74-year-old a hero’s welcome.

The warm reception, though met with a handful of protesters, came a week after New York City’s much larger National Puerto Rican Day Parade, which he also attended but as a regular citizen.

López Rivera was slated to receive the New York parade’s first National Freedom Hero award, but controversy arose when several corporate sponsors pulled support as a form of protest against López Rivera’s involvement. Eventually, he declined the award and bestowed it to others involved in causes for Puerto Rico.

In an op-ed published in the New York Daily News, he wrote: “I will be on Fifth Ave. not as your honoree, but as a humble Puerto Rican and grandfather who at 74 continues to be committed to helping raise awareness about the fiscal, health care and human rights crisis Puerto Rico is facing at this historic juncture.”

Of the flak in New York, a defiant López Rivera told Latino USA in Chicago: “I could count the number of people who had their thumbs down [at me]. The Puerto Rican contingent in New York was wonderful.”

During the Chicago parade, the controversy was at a minimum—given López Rivera’s roots in the Windy City run much deeper.

López Rivera was born in 1943 in San Sebastián, Puerto Rico, and moved to the United States during the period known as “Operation Bootstrap,” an effort by the U.S. federal government to industrialize the island’s traditionally agricultural economy that resulted in the migration of more than half a million Puerto Ricans to the mainland. The majority made their way to New York, but slowly many of those families continued on to Chicago, including López Rivera’s family when he was 14. The community first settled just north of downtown, then in the Old Town, Wicker Park, Lincoln Park and Lakeview areas, but as those neighborhoods gentrified, Puerto Ricans eventually were forced to the west side community of Humboldt Park.

At 18, López Rivera was drafted into the Army and sent to Vietnam. When he returned home in 1967 —a year after a series of riots and civil unrest shook Division Street after Chicago police shot and killed a 20-year-old Aracelis Cruz on the corner of Damen and Division— he saw his community in turmoil.

“I came back to a community that was marginalized, we had no voice,” López Rivera told reporters ahead of the walking tour inside the National Museum of Puerto Rican Arts & Culture, where several of López Rivera’s paintings were on display in a gallery space.

“Chicago was the most segregated city in United States and Puerto Ricans were one of the most marginalized communities in Chicago,” said José López, 67, López Rivera’s younger brother. “There was an incredible amount of poverty, low education achievement, a high rate of dropouts. This was a community that was extremely, extremely, well, the best way to describe it is a slum and a ghetto.”

That’s when López Rivera and others began organizing the community.

The alternative school opened its doors in 1972, offering bilingual instruction and bringing in the talents of University of Illinois at Chicago professors as instructors. Its first graduated class contained just eight students.

The Puerto Rican People’s Parade launched in 1978, a year after another set of uprisings in Humboldt Park. The Chicago parade dwarfed the New York City celebration, known as the national parade for the Puerto Rican diaspora, but the emphasis was on community from the very start.

Around the same period, López Rivera also became involved in Fuerzas Armadas de Liberación Nacional Puertorriqueña (FALN), described as a paramilitary group that fought for a free Puerto Rico, and which was responsible for more than 70 bombings from 1974 to 1983 in Chicago, New York and Washington D.C. that killed six people.

López Rivera was arrested in 1981 and during the trial declared himself a prisoner of war, defined himself as fighter in anti-colonial struggle and refused to recognize the U.S. courts as having authority to prosecute him under international law.

He was convicted on “seditious conspiracy” charges and sentenced to 55 years in prison. In 1987, he had another 15 years added to his time for conspiracy to escape.

For instance, the Puerto Rican Cultural Center —one of the organizations formed in the 1960s— has expanded to offer several initiatives geared to address the many disparities that exist within the Latino community, including the Humboldt Park Diabetes Empowerment Center, Vida/SIDA (a clinic that specializes in HIV prevention and the treatment of patients living with HIV) and El Rescate Transitional Living Program, which offers housing for homeless LGBTQ and HIV young adults.

In 1995, those two steel gateway flags were constructed to mark Paseo Boricua’s boundaries.

And on Saturday’s parade, that focus on representation on all facets of Puerto Rican life was present—leading with López Rivera, his brother José, Congressman and longtime supporter Luis Gutiérrez (D-IL), 26th Ward Alderman Roberto Maldonado, along with revelers dancing about wearing traditional masks made of papier-mâché, a trans beauty queen sitting atop a float and followed by an entourage of dozens of motorcycles and tricked out jeeps.

Larry Ligas of the Logan Square Concerned Citizens group told WGN that López Rivera and the FALN used violence to achieve political objectives and should not be celebrated. “They have blood on their hands and they are not heroes,” Ligas said.

Asked his reaction to those who view him as a terrorist, López Rivera told reporters, “The truth is, there is no evidence that shows that I did any of the things they said I did.”

As for the next chapter in his life, López Rivera has already picked up where he left off in his denouncing of the colonization of Puerto Rico, which is now seeking to renegotiate $72 billion of debt.

On Monday, he spoke to 24 members of the United Nations, asking that the Special Committee on Decolonization analyze the territory’s status to end its colonization by the United States. In the coming months, he plans to travel throughout Latin America to raise awareness about Puerto Rico. After that, he intends on resettling in Puerto Rico, starting with visiting 78 cities and towns on the island promoting his foundation.

As for his legacy in Chicago, López Rivera said that while he’s encouraged by the community’s resiliency, “we are under threat of gentrification,” pointing to the neighborhood’s increasing housing costs, reminiscent of when Chicago Boricuas were displaced generations ago.

“I don’t know how long we will last here.”