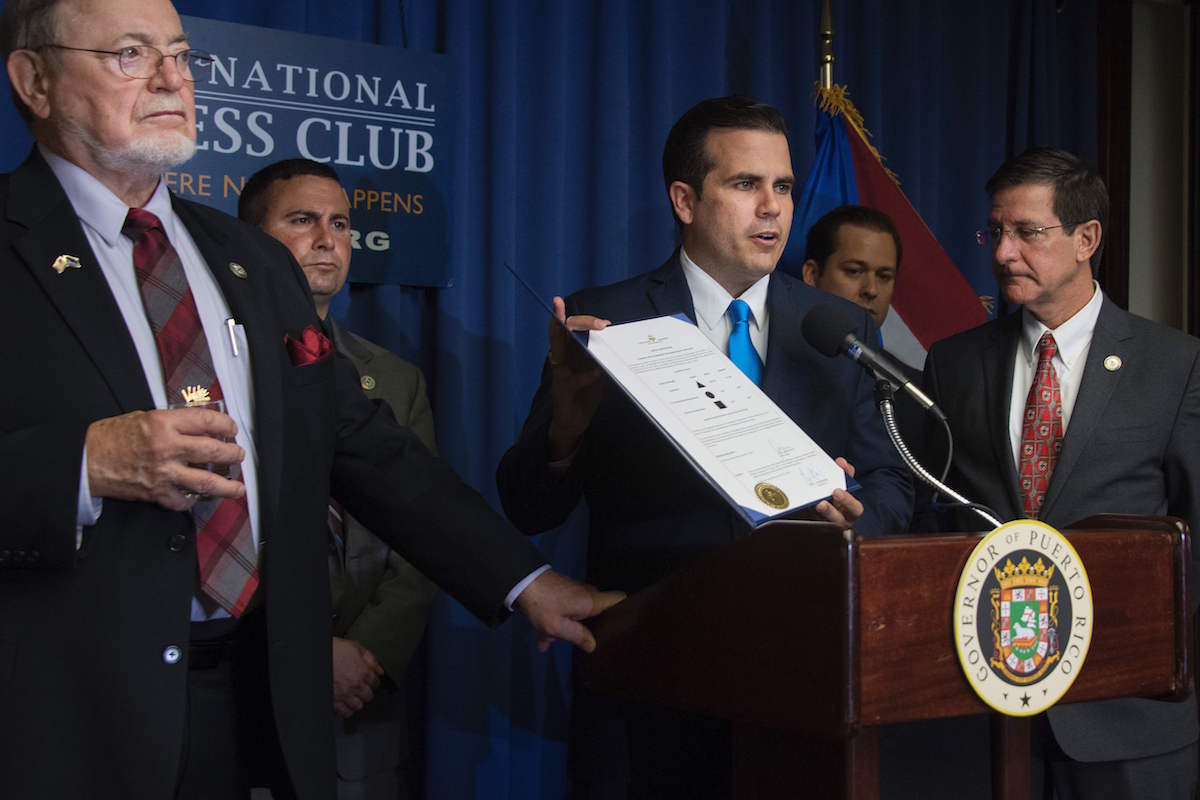 Puerto Rico Governor Ricardo Rossello (C) holds up the plebiscite results in which statehood for Puerto Rico obtained 97 percent of the support of the voters during a press conference at the National Press Building in Washington, DC, June 15, 2017. (JIM WATSON/AFP/Getty Images)

Puerto Ricans who turned out to vote in a referendum June 11 overwhelmingly expressed support for becoming the 51st state.

But that can’t happen until Congress passes a law to change the island’s legal status.

Congress, however, seems likely to drag its feet. That’s what happened when Hawaii became a state in the 1950s—an experience that offers some interesting and relevant parallels to the Puerto Rican case.

The Popularity of Populous Places

Like Puerto Rico today, Hawaii was a developed place when its residents applied for statehood. This is in contrast with some earlier states like Ohio and Wyoming that were carved out of sparsely populated territories. Hawaii’s population in the 1950s —just under half a million— was greater than that of several other states, something that is true for Puerto Rico today.

As novelist James Michener observed, “Hawaii is by far the most advanced state culturally that has ever been admitted to the Union.” Michener was referring to the high number of firmly established schools, churches, libraries and museums there—something Puerto Rico can also boast about.

Other parallels between the two include a location outside the continental U.S. and a diverse population in terms of race and ethnicity.

Of those two points, the second was the one that drummed up resistance to admitting Hawaii as state among the strongly conservative white southern Democrats who ran Congress for most of the 1950s. These so-called Dixiecrats feared that to admit multiracial Hawaii would likely lead to two more votes in the Senate for civil rights laws and for cutting off southern filibusters against such legislation.

As a result, the first major effort to pass a law admitting Hawaii came only after the 1952 elections. In that election cycle, the Republicans rode Dwight Eisenhower’s coattails and succeeded in winning narrow majorities in both the House and the Senate. But the statehood bill failed to pass during the period of GOP control in 1953-54, due to intense southern Democratic resistance to admitting Hawaii alone, and the Eisenhower administration’s rejection of a compromise that would have admitted mostly white Alaska first.

Eisenhower had two objections to the compromise. The first was that Alaska’s population was still too small —128,643, according to the 1950 census— to warrant giving its residents a voting member of the House and two senators. Second, Eisenhower thought that making Alaska a state might have led its newly empowered government to interfere with his administration’s plans to build major military installations there. And so Eisenhower opted to wait.

When the Democrats gained control of Congress in January 1955, southern Democratic leverage over the legislative process grew, something that blocked a second Eisenhower administration attempt to admit Hawaii in 1956.

It wasn’t until after the 1958 midterm elections —when so many northern, liberal Democrats were elected to the Senate that southerners became a minority of the Democrats’ delegation— that admission become possible. Clearing the way, too, was the growth in Alaska’s population to 226,167, plus a provision in the legislation for Alaska reserving large tracts of its land area for military purposes. This opened a path to statehood for Hawaii in 1959, but only after Alaska became a state eight months earlier. History suggests that efforts to pass a law admitting Puerto Rico will likely face tough sledding in Congress. There’s no Alaska-type compromise available this time. And even though the Dixiecrats have faded into history, strongly conservative white southerners once again mostly run Congress, albeit this time as Republicans. Opposition among them to admitting Puerto Rico seems likely, because its residents would almost surely elect liberals to the U.S. House and Senate.

Even so, Puerto Rico’s quest for statehood may not be hopeless.

Latinos have become a highly sought-after group of voters, especially as their numbers grow. Strong opposition to Puerto Rican statehood among Republicans could conceivably hurt GOP chances to win more support from Latinos living in such electorally important states as Arizona, Florida and Texas. The island would be the first state in which Latinos made up a large majority, and so its admission would have symbolic significance.

Trump’s plans to raise trade barriers with Mexico and other developing nations could, in my opinion, strengthen support in the American business community for admitting Puerto Rico as a state, because its labor market is similar but could not be walled off.

Growing national security concerns might also help Puerto Rico’s case for statehood, given its strategic location in the eastern Caribbean. Last but not least, it helps that Trump, during his presidential campaign, stated that he would favor admission of Puerto Rico as a state if that’s what the island’s residents wanted.

The lessons of the past suggest that Puerto Rico may have to wait a while, but could conceivably prevail in a bid for statehood, especially if the Democrats regain control of Congress. That would make Sen. Chuck Schumer of New York —a state that’s home to the largest number of Americans of Puerto Rican ancestry outside the island— the Senate majority leader, which would greatly aid that cause.