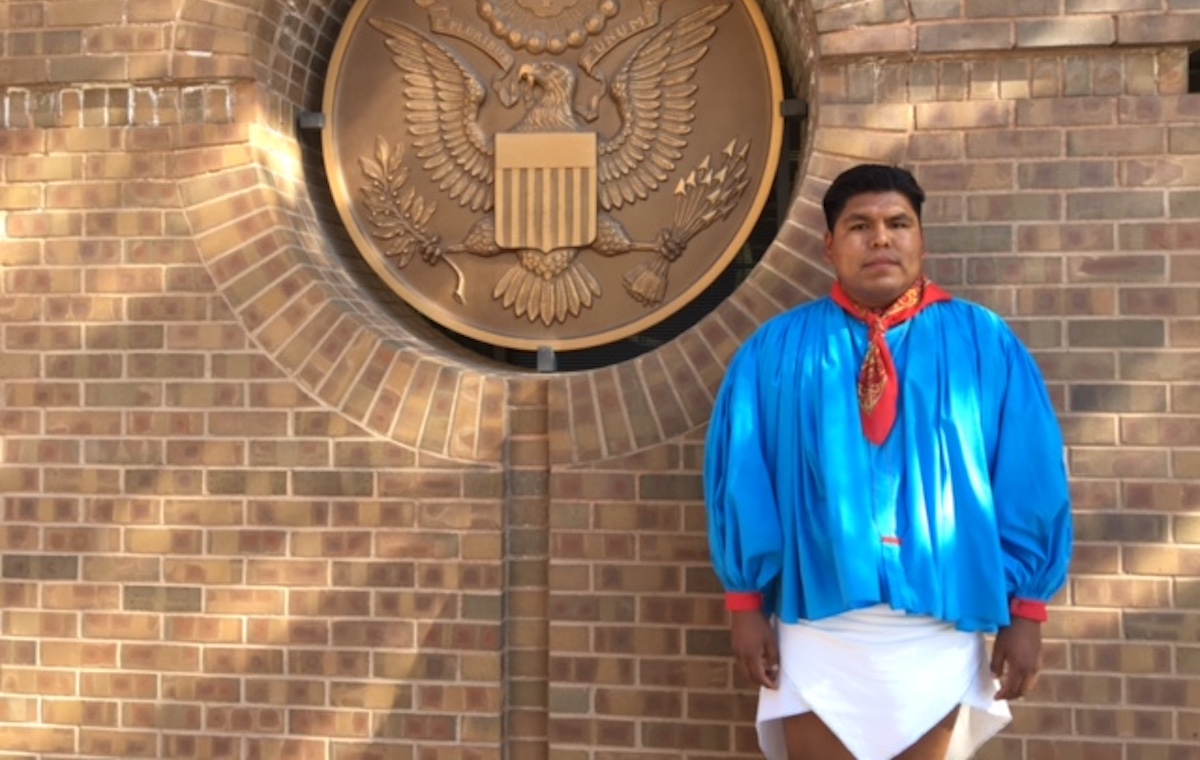 The Rarámuri people usually give their lives to harvesting corn to survive in the deepest parts of Mexico’s Sierra Madre Occidental. On their days off, they run and place bet against each other, and during these celebrations, a rustic violin is the main instrument. But in the last 20 years, the Rarámuri people and specifically, one Rarámuri man named Romeyno Gutiérrez, have been using a new instrument: the pianchi, or as we know it, the piano.

How did the pianchi reach the Rarámuri? Romayne Wheeler, a California-born professional pianist who after studying in Vienna for 10 years, decided to move to Gutiérrez’s community some years before he was born. Wheeler brought a small sun-powered keyboard to keep practicing his compositions, and later he managed to move his 1917 Steinway and Sons grand piano into the cave he still lives in.

“I knew Romeyno was not like the other kids, since he started showing up on my cave to listen to me play for hours. He would stay there, on his tips, listening and peeking through a window, instead of playing with other kids or just hanging around the community,” said Wheeler, Gutiérrez’s teacher and godfather.

Wheeler introduced Gutiérrez to his piano—first, as a hobby and later, as a future.

“When he realized I was seriously interested in the piano, he [Wheeler] started teaching me from the beginning, like how to sit, how to place my fingers and all that,” Gutiérrez told Latino USA.

At the age of 10, Gutiérrez, an indigenous Mexican child born in one of the poorest areas in the world, was starting his career as a professional pianist.

Today, Gutiérrez is 30 years old. He is studying music at the Chihuahua Conservatory. With only two years to go, he has become one of the greatest musicians in Mexico, but he’s not after a title, fame or money. Gutiérrez is following his heart, and his heart belongs to his people.

“I’m doing this because I want to give something to my community. The government never help us. Many people in Mexico don’t even know we exist, so this is the only way I found to take food or goods to my people,” he said.

The Rarámuri believe in kórima, the act of sharing. All they have, they share. Gutiérrez is able to play, thanks to a sponsorship from Wheeler, and now that he is giving concerts around the world, Gutiérrez gives back most of his earnings to his community.

Rarámuri means “the one with light feet.” They are usually known for running long and fast. In the last few years, the Rarámuri have been winning marathons around the world.

There are between 50,000 to 70,000 Rarámuri today. Most still practice a traditional lifestyle, inhabiting natural shelters such as caves or cliff overhangs, as well as small cabins of wood or stone. The Human Development Index for the Rarámuri in Chihuahua is 0.310, a number even lower than some of the world’s most underdeveloped countries. Last year, more than 104,000 Rarámuri in the Sierra Madre Occidental were living without adequate access to food.

Gutiérrez’s community is called Retosachic, a plain area in the middle of the woods, with only around 50 people scattered here and there. The women make their own dresses with flower patterns in powerful colors as red, yellow, green and purple. Men dress with a white waistcloth, rubber sandals and colorful shirts with no patterns on it.

For the Rarámuri, music is an essential part of their social lives. Wheeler said that “music sanctifies the moment in the life of all the Rarámuri.” Considering himself a Rarámuri after living in Retosachic for more than 30 years, Wheeler added: “All of our actions have musical meaning.”

Gutiérrez found a meaning of his own in Mozart, Beethoven and Chopin.

“I found how to sing to the things that matter. We don’t have a different word for singing or for music. It’s the same—music is singing and vice versa. And the piano is a way for me to sign to nature, to my people, to my ancestors,” Gutiérrez said.

A Concert in Texas

Gutiérrez met with Latino USA in El Paso, Texas, at a concert he was giving at the Mexican Consulate. He was dressed with a blue Rarámuri shirt, white waistcloth and rubber sandals, and admitted that the performing rarely makes his nervous.

“I remember my first concerts. I would be shy, never nervous. But once I started playing the shyness goes away, I focus on transmitting what I’m feeling, not only pushing the keys or following the letter,” he said.

Even though he’s been all over the world, for Gutiérrez, Retosachic will always be home.

“It’s been a big shock for me to get out of Retosachic,” Gutiérrez said. “To begin with the fact that we don’t use money, we are not used to trade money to get something, so that’s been the hardest part, to remember to have money on me, that everything has different costs.”

And although he was more than 450 miles from where he was sitting in El Paso, Gutiérrez still brought his audience to Retosachic.

“This is a danza Rarámuri we play on our traditional parties,” he said.

The playful chords jumped from Gutiérrez’s fingers, as the walls surrounding this solemn place began were crumbling and suddenly Gutiérrez was back home—the mountain wind moving his dark hair and flying around along the pianchi.